Wisteria is the perfect plant for a pergola 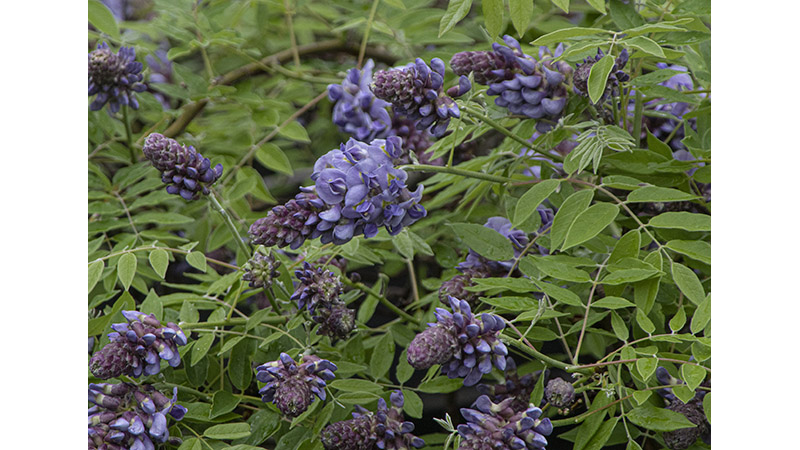 Whenever I visit friends in England, I’m seriously envious of their garden, but especially the wisteria (wisteria sinensis) that festoons one side of their 19th century rectory.

It has racemes of fragrant, lilac-colored flowers. It’s beautiful and is the perfect accent for that house. Nevertheless, I don’t grow this particular wisteria in my garden because wisteria sinensis is considered moderately invasive here. If I tried to grow it on the old, soft, handmade brick walls of my house, they would probably crumble.

Fortunately, there is another option. Wisteria frutescens, or American wisteria, is a native twining liana or long-stemmed twining vine that’s rooted in the soil at ground level and uses trees or various objects as a means of vertical support. American wisteria twines in a clockwise direction. It grows 30 to 40 feet and produces, pea-like, lilac purple flowers in drooping racemes. It’s blooming now and is quite showy. Unlike Chinese wisteria, the flowers appear after the leaves and aren’t fragrant, but no matter.

American wisteria grows in wet, swampy areas and moist thickets in the coastal plain north to Chesterfield County. Virginia is the northernmost fringe of its range, so it’s not surprising that American wisteria is rare here and is ranked as critically imperiled.

Fortunately for us plant lovers, it’s available in the nursery trade and is easy to grow. American wisteria prefers slightly acidic soil and requires full sun and some regular pruning to keep it in shape as well as encourage blooming. It blooms on new wood.

The genus name, wisteria, honors Caspar Wister, a late 18th century physician from Philadelphia. Frutescens means “shrubby.” There are seven or eight species classified in this genus. Two are native to the eastern United States, while the rest are native to eastern Asia.

American wisteria is the perfect plant for a sturdy pergola in a sunny area. It attracts hummingbirds, butterflies and bees. It is mostly deer resistant.

Growing American wisteria from seeds is not for the impatient gardener as there may be a considerable time lag between the sprouting of seedlings and the appearance of the first flowers. Go buy some nice-sized plants and enjoy them. The most readily available cultivar is Amethyst Falls, and it was selected from a wild source.

And, oh, by the way, American wisteria is the 2021 Virginia native wildflower of the year.

The joys of growing potatoes