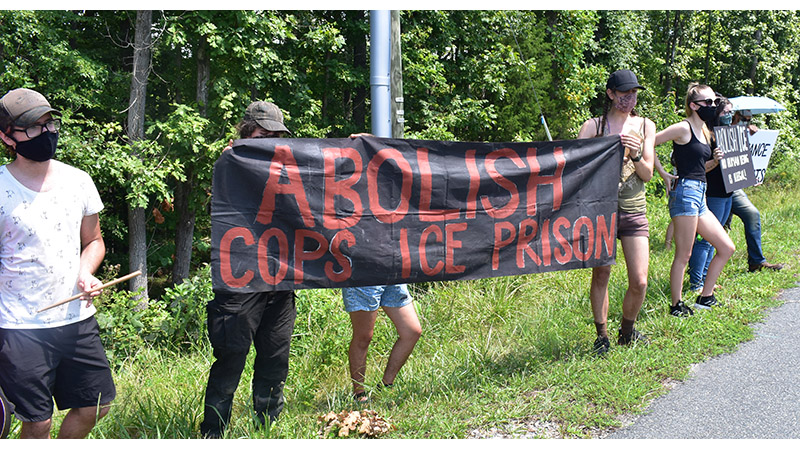 A COVID-19 outbreak that resulted in the death of a Canadian citizen at the Immigration Centers of America Farmville detention facility led to protestors chanting while carrying signs at the facility in July of 2020. (Photo by Alexa Massey)

Despite the town’s first property tax increase in 35 years being on the agenda, it was Farmville’s relationship with the local U.S. Immigrations and Customs Enforcement (ICE) detention center that came under fire during the Farmville Town Council’s Wednesday, May 19, monthly meeting.

The public hearing on the 2021-22 budget was the target of several speakers from the Free Them All Virginia Coalition. Many of the group’s speaker spoke in Spanish, but the translation was clear. They want the Town of Farmville to end its contract with the Immigration Centers of American (ICA) ICE facility.

“Now is the time to end the contract with ICE,” a person who identified herself on the phone to council as Free Them All Virginia organizer Dina Cruz said. “I want to take a moment to emphasize how you and your colleagues could accomplish something significant by ending this contract with ICE and ICA and take a stand against the system of immigration detention and refuse to fund your town budget at the expense of basic civil and human rights.”

A statement from Mary Ann Campbell of Farmville read by Cruz urged the town to find other sources of revenue.

“I urge you to immediately end the town’s contract with ICE and fees profiting from ICA Farmville’s inhumane detention practices,” the statement to council read. “People for our own area have been detained at the ICA facilities, separating them from their loved ones and communities. We need to stop being complicit in this abusive and racist system. We must find alternative, ethical sources of revenue for this town.”

No one from the town responded to the comments of the speakers.

The facility, which opened in 2008, pays the town approximately $20,000 per month depending on the number of detainees housed in the facility.

The Farmville facility received national attention last year at this time when the detention center experienced a severe COVID-19 outbreak leading to the death of a Canadian citizen detained there.

The vote for the first tax increase by the town since at least 1984 went quickly and without any comments from the public. Only Councilmember Sallie Amos voted against the increase that took the equalized property tax rate up 2.5 cents to 13 cents per $100 valuation.