Farmville police are looking for a man related to a Saturday, May 1 shooting incident that left one man wounded. 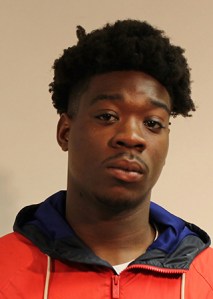 Tashon Lamont Brown, 21, of Farmville, remains at large and is considered armed and dangerous. He has been charged with multiple felonies related to the shooting that happened Saturday at 6:47 p.m. in the 500 block of South Virginia Street.

Officers arriving on the scene after a call reporting shots fired found one person had been shot and transported to the hospital in a private vehicle. According to a release from the Farmville Police Department, the victim is a 24-year-old male who was treated at Centra Southside Community Hospital before being transported to VCU Medical College with non-life threatening injuries.

At 9:21 p.m. Friday, April 30, Farmville Police responded to a report of shots fired in the 800 block of Buffalo Street. Once on the scene, officers determined multiple shots had been fired. Multiple shell casings were collected from the scene.

Then at 9:55 p.m., police received another call from a motorist traveling west on Third Street near Industrial Park Road. The driver said he had been shot at, and a bullet had struck the vehicle. Officers responded and were able to confirm that the vehicle had been struck by a bullet. They were also able to collect additional evidence from the scene. No injuries were reported at either scene.

The Prince Edward County Sheriff’s Office is investigating two additional weekend shootings in conjunction with the shooting in Farmville.

A press release from the sheriff’s office said deputies were called to a report of shots fired Saturday, May 1, at 3:30 p.m. on Apollo Drive in the Worsham area. After arriving, deputies learned that a dark-colored SUV stopped at Apollo Drive, and an altercation apparently took place in the driveway.

The release said five to six Black male subjects got back into the SUV after the altercation, and as the vehicle was leaving, several shots were fired with one hitting a mobile home.

On Sunday, May 2, at 11:50 p.m., deputies were called to another report of shots fired on White Pine Drive in the Pamplin area. The release said after arriving, “deputies found several holes in a mobile home. ” The home was occupied when the shots were fired.

Anyone with information pertaining to these investigations, or Browns whereabouts, is asked to call (434) 392-3332 or use the anonymous Tip411 application. Tips may also be texted to 847411. Messages must begin with the key word “FarmvillePD.”