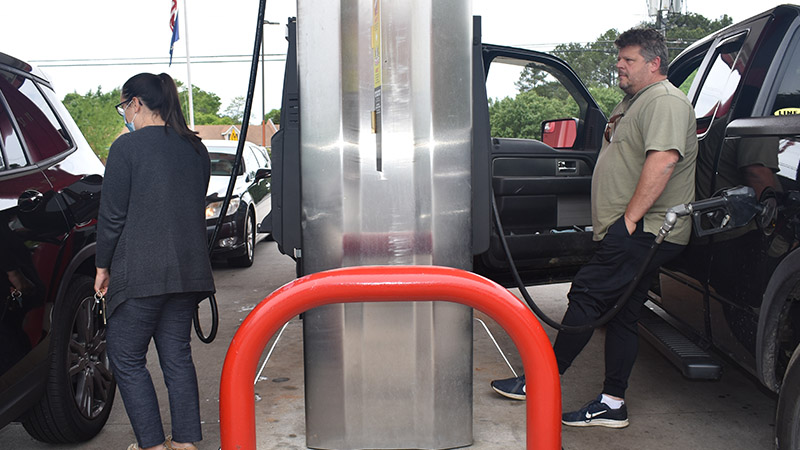 A ransomware attack to the Colonial Pipeline system caused gas shortages across the eastern U.S. throughout the week, including in Farmville. From left, Carly Haddock and Andy Dalton fill up at the Sheetz gas station in town. (Photo by Alexa Massey)

Some area gas stations are running out of fuel after a ransomware attack to the Colonial Pipeline system led to gas shortages across the commonwealth prompting Virginia Gov. Ralph Northam to declare a state of emergency Tuesday afternoon, May 11.

On Tuesday, Northam, according to a release distributed at 2 p.m., signed Executive Order 78, declaring a state of emergency in Virginia to address gasoline supply disruptions following a May 7 ransomware cyberattack on the Colonial Pipeline system, a primary fuel source for several Virginia retailers. The attack resulted in a temporary shutdown of the pipeline.

According to the release, the U.S. Environmental Protection Agency has issued a temporary fuel transportation waiver in order to increase the supply of gasoline. Northam’s declaration allows state agencies to issue their own waivers as required by the state and provides flexibility and funding for both state and local governments to ensure fuel supply is adequate.

“This emergency declaration will help the commonwealth prepare for any potential supply shortages and ensure Virginia motorists have access to fuel as we respond to this evolving situation,” Northam said.

While areas in eastern Virginia were seeing the brunt of fuel shortages as the week started, several gas stations in Farmville began running out of gasoline Tuesday in what some local station managers described as an example of panic buying.

Tammy Barker, manager of JW’s Express on East Third Street, confirmed Tuesday afternoon the station had run out of gasoline around 2 p.m. She added customers, many of which she does not typically see at the station, arrived in the early morning in hopes of filling up the tank.

“Before we opened this morning, they were lined up at the pump,” she said.

Barker said JW’s four gas pumps were busy all afternoon up until the last drop was purchased, adding some customers were worried about a potential gas shortage after hearing of the ransomware attacks. The last time JW’s ran out of gas was during February’s brutal ice storms that left some residents without power for weeks.

Barker said Tuesday afternoon she did not have an estimate as to how long the station would be out of gas.

Over on the west end of Third Street, Genise Gould, team leader of the Valero gas station/Fas Mart convenience store, said her location ran out of gas earlier that morning before getting a new delivery in the afternoon.

Gould said Valero was also flooded with customers throughout the day.

“We have seen a large amount of people, people just panicking.”

While the hubbub meant the station experienced long lines Tuesday, Gould said luckily there weren’t many customers who came inside the store to purchase their gas, helping to keep the disarray from seeping indoors.

“You don’t need to panic,” Gould advised. “If you’re without (gasoline), then you’ll be sitting at home, and that’s the safest thing to do with the coronavirus out right now.”

Gould did not have an estimation Tuesday afternoon as to how much longer the station would have fuel in stock.

By Wednesday, there were few people left in the area unaware of the event as several more gas stations ran out of fuel and long lines snaked through more parking lots.

The Sheetz gas station was packed Wednesday afternoon with cars lined up to get some gas in the tank. Resident Umar Mujahid said he was simply getting close to empty and needed to fuel up anyway, as did local Carly Haddock. Haddock said her typical station of choice was completely out of fuel and a family member tipped her off that Sheetz had fuel in stock.

Out-of-towner Andy Dalton stopped at Sheetz in Farmville half-way through a trip to Richmond in order to fill up in fear the river city would be impossible to find fuel in.

Even further down West Third Street, Tom’s Country Store/CITGO gas station owner Khushi Muhammad said his station ran out of gas between 2-3 p.m. Tuesday before receiving another delivery at 7 p.m. As of Wednesday, the station was still busy but had not run out again.

Muhammad said business had been steady all day, and while most people pulled up to fill up their tanks, some also came prepared with 2- and 4-gallon gas cans to fill.

“It looks like people get panicked some,” he said. “Some people do, some people don’t, but I cannot judge … people still need gas, still have to go to work.”

Nick Patel, manager at the Marathon gas station near Hampden-Sydney on Farmville Road, seemed to experience some of the earliest affects of the pipeline attack when he was notified at the beginning of the week by his supplier that delivery issues were to be expected.

Marathon ran out of regular gasoline on Monday and by Tuesday had also run dry of premium.

On Wednesday, Patel said he did not know when a new delivery of gasoline would finally arrive, adding business was hurting due to the fact that a lack of fuel has meant fewer customers are venturing into the convenience store to purchase other items.