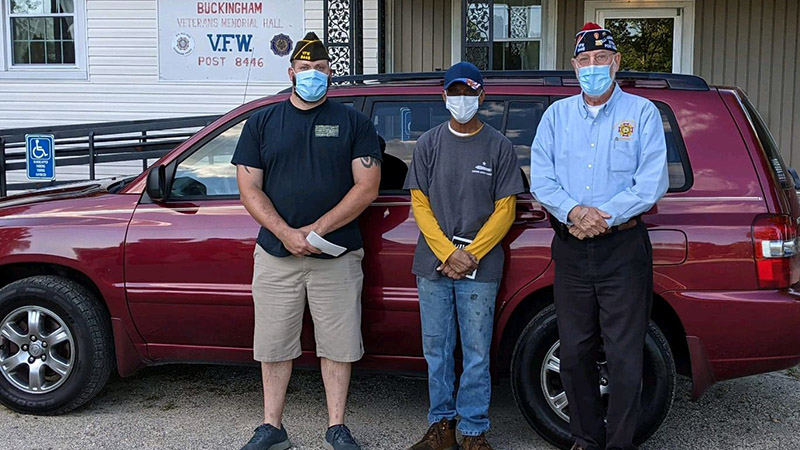 Sgt. Josh Jones used to fight for his country’s freedom. Now, he spends his days giving local veterans and first responders a different kind of freedom.

The area veteran has found solace and a greater purpose by giving back to his fellow men and women in uniform through the creation of a nonprofit which donates vehicles to veterans and first responders in need.

Sgt. Josh Jones, 38 of Buckingham, served his country in the U.S. Army Reserves. During his two tours in Iraq, the soldier was bombarded with chlorine gas, bombs and regular mortar and rocket attacks.

On his final tour, Jones injured his back and was medically discharged. For several years he served as a sheriff’s deputy at the Chesterfield County Sheriff’s Office. He would go on to settle down and start a family.

It was just a few years ago that Jones became a member of the Buckingham VFW Post 8446. He attended regular meetings for the group. It would be his involvement with the VFW which led him to a new calling in life.

During a regular meeting, a friend came to the Post and informed the group he had encountered a Marine Corps vet who was in need of a vehicle and couldn’t work or support his family without it. The veteran was looking for anyone who could help.

The call for help ignited something in Jones who suffers from post-traumatic stress disorder (PTSD) after his time overseas.

Immediately, Jones sprang into action and volunteered to take on the task. By the time he’d completed his 12-minute drive home, he’d already lined up a vehicle to be donated and was in contact with possible sponsors to fund what work needed to be done on the car before it was gifted to the vet.

Like many veterans, for Jones, life after his military service was spent trying to find a place in the civilian world while fighting the inner battles spurred on by combat. But when he sat down in March of 2020 to work on that first vehicle, the stressors of the past faded away.

“That two weeks it took me to get that vehicle ready, I didn’t really think about anything else except for the veteran getting that vehicle,” he recalled. “I just kind of zoned in on it and did it, and my wife was like, ‘Wow, you’re you again.’”

The process proved to be therapeutic, and suddenly, Jones had found a new way to serve.

That first vehicle donation led to the creation of Jones’ 501(C)(3) nonprofit, Vet to Vet Vehicles. Launched at the beginning of the pandemic, the organization helps veterans and first responders in need of transportation by finding a suitable vehicle, fundraising for the necessary equipment and gifting that vehicle to local vets/first responders and their families.

While Vet to Vet Vehicles is still in its infancy, Jones has experienced extraordinary success since its creation.

Since March of last year, the organization has located, performed repairs on and donated five cars to area vets.

While the vehicles are all donated, Jones won’t take just any car. Vet to Vet Vehicles’ Board of Directors first selects a recipient out of a pool of nominees. That recipient is then matched to a vehicle inspired by their individual needs, such as a fuel-efficient car for a commuter or an SUV for a veteran with a large family.

The organization spends approximately $2,500-$3,000 on average for repairs to the donated vehicles, making sure the end result is something a vet would be proud to drive.

A recent donation hit home for Jones after a local man from Buckingham was nominated to receive a vehicle.

Cpl. Miguel Arce, 65, of Dillwyn, previously served in both the Army and the Marine Corps.

A few years ago, Arce was diagnosed with non-Hodgkin’s lymphoma, a cancer which he is believed to have developed after being exposed to certain chemicals during his military service.

Arce has received chemotherapy for his condition and recently received a stem cell replacement treatment, but the loss of a working vehicle left him homebound for months with no means of transportation to or from medical appointments.

When Jones heard about Arce and his situation, the vet sprang into action once again. Vietnam vet and VFW Post 7059 member John Hedrick and his wife Julia donated a Toyota Highlander to the nonprofit, and Jones worked hard to make sure the SUV was not only in perfect running condition but was also painstakingly sanitized to protect Arce’s compromised immune system.

“We wanted the whole thing to be extremely clean and nice inside for him,” he said.

Thursday evening, May 13, Arce was taken on an impromptu trip by loved ones to the Buckingham VFW Post 8446 building. Jones was waiting there with the SUV in Arce’s name.

“I couldn’t believe it,” Arce said of the gesture. “Nobody’s ever done anything like this for me.”

People from across the country have gotten word of Jones and his mission, and his story has inspired many. In fact, there’s been interest from multiple individuals wishing to start up their own local chapter of Vet to Vet Vehicles. But as the nonprofit is still in its early stages, Jones hopes to focus on building the organization locally before branching out into further areas. He recently had a shop built in order to allow for a space completely dedicated to vehicle repairs.

While local businesses have donated some vehicles and parts, much of the cost of revamping those vehicles comes out of Jones’ own pocket. Although residents and VFW members have donated money to his cause, his next big goal for the nonprofit is to establish stronger means of fundraising.

“It’s like I’m working on something bigger than myself,” he said.

Those who wish to learn more about Vet to Vet Vehicles or donate funds can contact the organization via Facebook, by calling (804) 398-8914 or by logging onto vettovetvehicles.com.