Locals belly up to the bars again 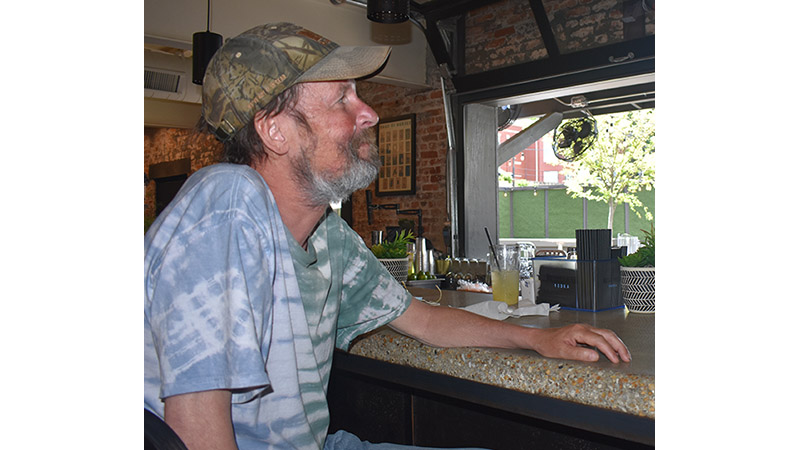 Recent changes in regulation mean customers can now sit at bars again, and soon restaurants will be able to serve alcohol and keep their dining rooms open past midnight. Local Chip Shell, seen here at the North Street Press Club, said he is happy about the changes. (Photo by Alexa Massey)

Area bartenders, restaurant owners and patrons are growing excited about eased restrictions for alcohol and food sales in the commonwealth.

Recently, Virginia Gov. Ralph Northam announced he would amend Executive Order 72 to allow eased regulations for bars and restaurants. Come May 15, businesses will be able to continue alcohol sales past midnight, and dining rooms will no longer need to close between the hours of midnight and 5 a.m.

Wednesday, April 21, Northam announced Virginians could immediately begin sitting at restaurant bars again as long as customers maintain a distance of six feet between one another.

For many local businesses, the eased restrictions are exciting news.

Wednesday, May 5, North Street Press Club and The Fishin’ Pig co-owner Nash Osborn said both restaurants began allowing patrons to sit socially distanced at the bar as soon as they were notified of the eased restrictions. He added customers have been excited to return to the bar, although it feels a little strange finally being back in the barstool.

Osborn is also excited for the May 15 amendments that will allow the restaurants to operate later into the night.

Owners curtailed The Fishin’ Pig’s hours after the opening of the Press Club, meaning even before the pandemic the business only stayed open until around 9 or 10 p.m. depending on the day of the week. The Press Club, however, was operating pre-pandemic until about 1 a.m. Monday-Wednesday and stayed open until 2 a.m. Thursday-Saturday. The restaurant offered food until last call, typically around 1 a.m.

Nash confirmed the Press Club will likely be returning to a midnight or 1 p.m. closing time Monday-Wednesday after May 15, and owners plan on keeping the doors open until 2 a.m. for weekend hours.

Nash said although closing early has certainly meant a loss of revenue for the business, the restaurant has been supported throughout the pandemic by kind-hearted customers and the community.

Amberly Eells, restaurant manager for The Brew House in Farmville, said Wednesday the restaurant is not immediately putting barstools back at the bar. As the restaurant is on the smaller side and six feet of distance would not leave much room, Eells said the eatery will continue its current floorplan in which tables are pushed up against the bar, six feet apart, in order to maximize space.

Like The Fishin’ Pig, Eells said The Brew House did not typically operate past midnight even before the pandemic, so May 15 will likely not bring many changes to the establishment, although an increase in business may lead management to open the location a full seven days a week. The Brew House does not currently operate on Tuesdays.

Eells said business has appeared to pick up recently as restrictions fall and vaccine rates rise.

“I did have customers who came in the other day, and this was the first time they’d been out to eat since COVID started, and it was because they were more comfortable because people are getting vaccinated,” she said.

Eells added it feels great to be able to work towards a new sense of normal in the restaurant industry.

Sam Andrews, assistant manager of the Farmville Macado’s location, confirmed Wednesday the restaurant is currently allowing patrons to sit at the bar. While Macado’s offered food and beverages past midnight pre-pandemic, corporate has not yet made a decision as to whether or not hours will be increased after May 15. The restaurant is, however, preparing to reopen its indoor dining area after a complete remodeling.