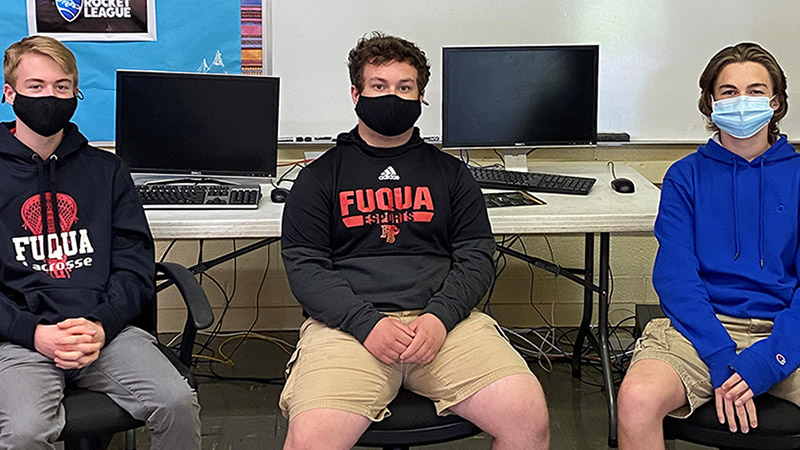 Fuqua School added Esports to its repertoire of sports offerings this past February.

Since then, Fuqua student athletes have played an array of video games such as League of Legends, Smash Ultimate and Rocket League, advancing through competition after competition to earn a spot in the playoffs.

“We are extremely excited to offer Esports for our students,” Mike Edwards, director of athletics, said. “If you are not familiar, Esports is a form of video game competition that allows multiple players to compete against each other, specifically as a team. It’s a team sport that any student can get involved in, even if they are already involved in another sport.”

Gaming has become extremely popular across the country, and now students can experience Esports as a high school athletic activity competing for a championship title and college scholarships.

The Falcons Rocket League Esports team, one of four Fuqua teams, clinched a spot in the playoffs for the eastern region. The eastern region consists of 575 teams from Maine to Florida incorporating all states in the Eastern time zone. The Fuqua Falcons team finished the regular season with a record of 22-6 making them #16 in the region.

Fuqua’s team is coached by Head Coach Jamiel Jackson and alumni Assistant Coaches John Boswell and Peyton Wiecking. According to Jackson, he has seen great improvement in the students since February, as many of these athletes had never played these specific games or used this format.

“These athletes have shown a true passion and dedication to their sport,” Jackson said. “To be in the first season of competition and make the playoffs, or even to rank in the Top 20 teams in the region, is an amazing accomplishment.”

The post-season competition will include only the top 64-ranked teams in the region and will then be narrowed down to the final two teams for the Spring Championship.

“I am really proud of our Esports athletes and their many accomplishments in their first year,” Head of School Chance Reynolds said. “I am thrilled we are able to offer these types of opportunities to our students here at Fuqua for many years to come.”

The Falcons will take on TABB High School from Yorktown Thursday, May 6, in the quarterfinals.