Fugitive remains at large after search

The Buckingham County Sheriff’s Office in conjunction with the Virginia State Police (VSP) is seeking assistance in its search for Dillwyn resident and fugitive Kendall Allen Jamerson.

According to Brent Uzdanvoics, administrative lieutenant with the Sheriff’s Office, Jamerson, 35, is wanted on 11 different criminal warrants (three misdemeanors and eight felonies) ranging from abduction and strangulation to possession of a firearm by a felon. 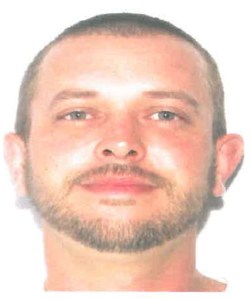 The warrants are the result of several incidents involving an acquaintance and date as far back as Feb. 28.

Sunday, May 23, at approximately 7:30 a.m. the sheriff’s office received a tip to the whereabouts of Jamerson. Deputies along with state troopers located the suspect in the area of Cooper Mine Road in Dillwyn.

According to Uzdanovics, when approached, Jamerson fled in a pickup truck leading to a vehicle pursuit with assistance from the VSP aviation unit.

The pursuit continued into the Spears Mountain area where Jamerson abandoned his vehicle and fled on foot. A search of the surrounding woods proved unsuccessful, and Jamerson remains at-large.

The fugitive is described as a white male, age 35, height 5’7”, weight 185 pounds with brown hair and green eyes.

The Sheriff’s Office is requesting the public’s assistance in locating Jamerson. Anyone with any information on his whereabouts is asked to contact the Buckingham County Sheriff’s Office at (434) 969-1772.