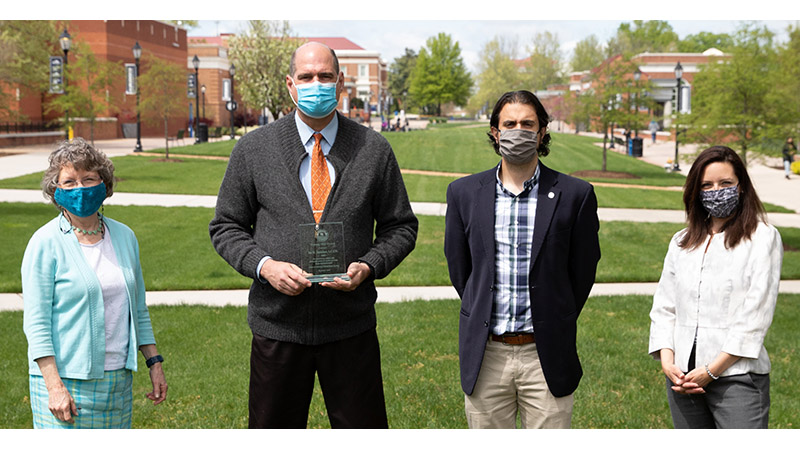 A local professor who has dedicated his career to advocating for child abuse victims was recently honored by the Virginia Office of the Attorney General with the Unsung Hero award.

According to an April 7 release, the award is presented to individuals who show a deep commitment to victim services.

The local recipient, Ian Danielsen, 53, is an assistant professor of social work at Longwood University in Farmville. He received the award during a Wednesday, April 21, ceremony at the university. Presenting the award was David Malakouti, community outreach coordinator with the Office of the Attorney General.

Danielsen, who grew up in Roanoke, says he chose a career in social work after learning it involves both helping people directly and working for system change and social justice.

“Social workers are mandated to try to reform the systems and help people, and when I heard that, I was like, ‘Tell me you’re not just sweet-talking me,’” he said. “I never looked back.”

Danielsen attended Radford University where he received a bachelor’s in sociology. He later attended Virginia Commonwealth University for a master’s in social work.

From the start of his career in 1993 to present, Danielsen has held a variety of positions across the commonwealth working to advocate for victims of abuse. For approximately 10 years he worked with the Virginia Department of Juvenile Justice, working with juvenile offenders with intellectual disabilities in treatment-oriented rehabilitative programs.

From 2002 to 2006, he worked with several organizations including Intercept Youth Services, Inc., the Partnership for People with Disabilities and the National Counseling Group.

From 2006 to 2016, Danielsen entered what he describes now as the toughest job he ever loved working as a program coordinator at the Greater Richmond Stop Child Abuse Now (SCAN), a nonprofit organization dedicated solely to the prevention and treatment of child abuse and neglect in the Greater Richmond area. There, he helped to run the organization’s children’s advocacy center and coordinated multidisciplinary teams of specialists.

During this time in his career, Danielsen began to do legislative advocacy work at the General Assembly, working at the state level to get laws passed that advocated for children in and out of the courtroom, such as a 2014 bill which requires multidisciplinary team collaboration in child abuse investigations in every county and city in Virginia.

He also began to do court testimony work in child abuse trials, helping to educate jurors about things like child forensic interviewing, how victims experience trauma and why children do not speak up about abuse right away.

A self-described family man, Danielsen currently lives in Farmville and enjoys spending time with his wife and two children.

Danielsen was nominated for the Unsung Hero award by former coworker and Domestic and Sexual Violence Resource Prosecutor Nancy Oglesby. Although he learned he would receive the award last spring shortly after COVID-19 sent students and professors home for the remainder of the semester, it was not until late April of 2021 that he officially received the honor along with 11 other recipients across the state during a virtual ceremony with Virginia Attorney General Mark Herring.

“It knocked me flat,” he said of the news.

Danielsen was honored to receive the award, especially in April, the national Child Abuse Prevention Month. In 2019, Danielsen invited his students in policy class to request the Prince Edward Board of Supervisors officially declare April Child Abuse Prevention Month in Prince Edward County through proclamation. The move was successful, and Danielsen and his students now use the month to educate the community on child abuse awareness and prevention through a variety of events such as tabling, conferences and free training.

Danielsen stressed while awards are often given to individuals, individuals never earn those awards alone. He was very thankful of those who he has worked with throughout the years to make his work possible.

But of course, there is more work to be done. Danielsen continues to do court testimony, and when asked about his future plans, he added he hopes to stay involved in legislation and desires to see some future system reform including work improving accommodations for children in courtroom situations.

While the type of work Danielsen does can be difficult, he said he’s never regretted his career choice, and he shows no signs of slowing down.