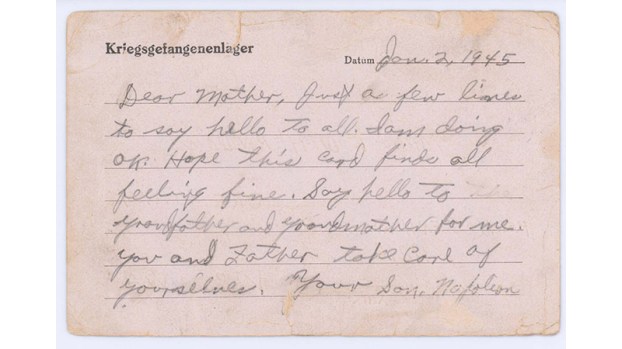 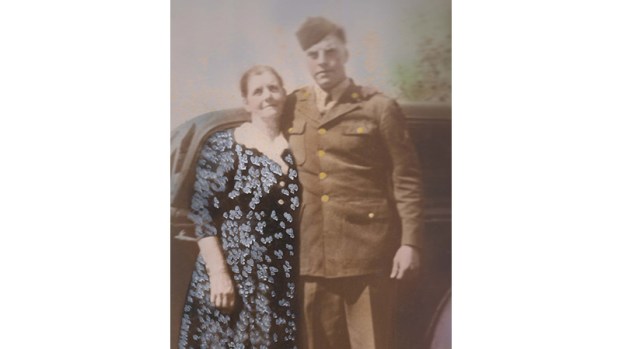 Colorized photograph of Joseph Dunkum with his mother, Hattie Dunkum.

The Virginia War Memorial’s latest installment of the livestream series “From the Archives: Dear Mom” will occur Friday, May 7, at 4 p.m. The program will feature items from Buckingham County soldiers in World War II.

The online event is free, but registration is required at vawarmemorial.org/events.

Two of the items that will be featured share family stories from Buckingham County. Roger Napoleon Herndon joined the Army in 1942. He served in Europe and was taken prisoner during the Battle of the Bulge. He wrote his mother postcards to let her know where he was and to reassure her he was safe.

“Many of the letters that soldiers, sailors, Marines and airmen wrote home during wartime have a common theme,” Sheldon said. “Whether in training or at the front, these folks wrote home to let their moms know they were fine and ask them not to worry.”

Another Buckingham County man Sheldon will be talking about, Joseph Dunkum, was also at the Battle of the Bulge. Unfortunately, PFC Dunkum did not make it home.

In addition to these two Buckingham County men, Sheldon will highlight the letters to mothers sent home by other Virginia servicemen during World War II.