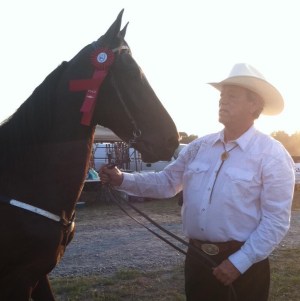 On Friday, April 9, Wayne Grey Carter, loving husband, father and grandfather went to be with the Lord at age of 71.

Wayne graduated from Buffalo Gap High School and then went on to join the United States Navy. After he was honorably discharged, he attended community college for a business degree. Wayne then worked for the C&O and CSX railroad until he retired after 31 years.

Wayne married Rebecca Simpson of Clifton Forge, and was married for 49 years residing in Buckingham County primarily for most of their marriage. Wayne and Rebecca raised two sons and one daughter, Joanna, Rex and Charlie Carter.

Wayne was an avid hunter who enjoyed having bear and coon dogs most of his adult life. He shared this hobby with his brother Rusty, his two sons and grandchildren. Wayne also took up farming in his later years. A few years ago, he traded a pony that the grandkids had outgrown, for a ram and it was the start of his farming “career.” From bottle-raising calves, collecting goats, hatching chickens and ducks, he had it all. He thoroughly enjoyed his newfound hobby and soon even had Becky driving the tractor for him.

Wayne started riding horses at a young age with his family and eventually taught his children as well. He enjoyed trail riding and showing Tennessee Walking Horses but really loved watching his grandchildren ride and show the most.

Wayne was preceded in death by his father and mother, Leo and Fern Carter and daughter, Joanna Grey Carter.

He is survived by his wife, Rebecca Simpson Carter; two sons, Rex and his fiancée, Janelle, and Charlie and his girlfriend, Maggie and eight grandchildren, Colton, Lilly, Lacy, Joanna, Jackson, Austin, Karmen and Hannah.

A graveside service was held on April 13, at Antioch Baptist Church. In lieu of flowers, donations can be made to Black Rock Hunt Club P.O. Box 703, Dillwyn, VA 23936.