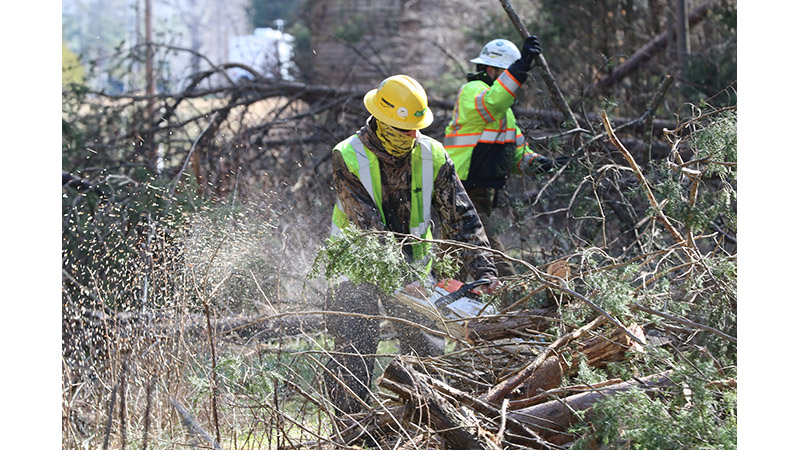 A representative of Southside Electric Cooperative (SEC) recently appeared before the Prince Edward County Board of Supervisors and then later the Farmville Town Council to provide information and answer questions following the widespread power outages on its system following the February ice storms.

The storm left 84% of SEC’s customers without power, some for as long as two weeks. The storm broke 826 poles and cost more than $21 million to restore.

Jacob McCann, vice-president of human relations for Southside Electric Cooperative, said SEC’s territory was in the bullseye of the storm. McCann said the SEC power grid is meant to withstand half an inch of ice on power lines along with 40 mph-hour winds.

“In many locations, we had more than that,” McCann said.

SEC’s presentation did not answer the main question Prince Edward Supervisor Jerry Townsend had. What has the cooperative learned that can help them in future storms?

“I thought it was totally unacceptable to be without power for 11 days,” Townsend said. “You did an excellent presentation, but no one, the average family is not prepared for 11 days. Using a generator cost me $30 a day to operate.”

Townsend asked McCann what the cooperative was going to do to limit the amount without power during a similar storm.

McCann said although the cooperative learned a lot from this storm, there really is no answer that would minimize the time people spent without power.

The age of the poles had little to do with their reliability, according to McCann, who said poles are inspected every 10 years.

“During this storm, we lost brand new poles and old poles,” McCann said. “There was no relation between the age of the pole and its integrity.”

McCann told the supervisors the reason customers could not reach SEC by phone was because the out-of-area call centers the cooperative contracts with to take overflow calls were in Texas and Tennessee, two areas who were also struggling with issues of their own from the same ice storm.

Many customers took note at the time of the outage that Dominion Energy and Mecklenburg Electric Cooperative crews were able to have the majority of their customers up and running in just a few days. McCann said their areas were not hit as hard as SEC’s 18-county territory.

“We were right in the bullseye of the storm and received a heavy loading of ice across our service territory,” McCann said. “Eighteen counties, 9,000 miles of line, and a lot of it was laying on the ground.”

The two-week outage is currently under investigation by the State Corporation Commission. SEC has promised to make the results of the investigation public once they become available.