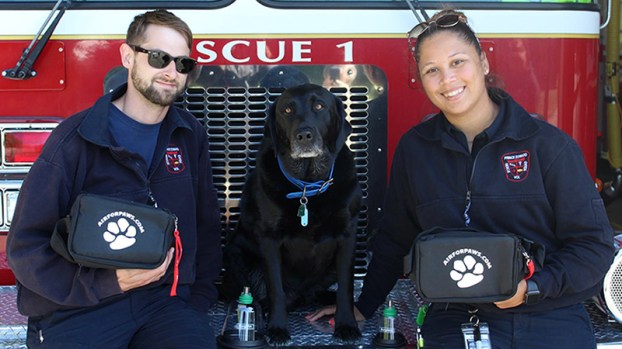 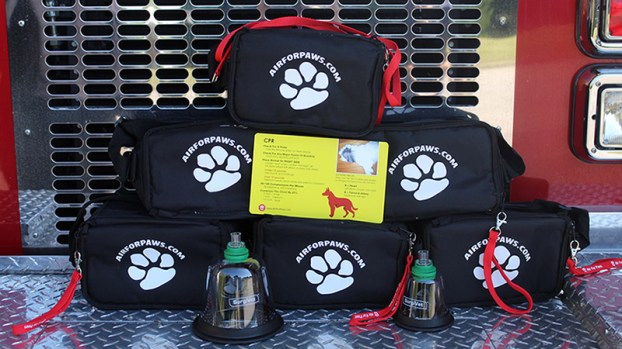 Six resuscitation kits the Prince Edward Volunteer Rescue Squad have been received from nonprofit AIR FOR PAWS. The kits include a large and small oxygen mask, a CPR instruction card, an airway breathing instruction card and two leashes.

An estimated 40,000 pets die in fires each year due to smoke asphyxiation, but a recent donation to the Prince Edward Volunteer Rescue Squad (PEVRS) will help to keep local furry friends safe from that harrowing statistic.

AIR FOR PAWS, a nonprofit organization aiming to get pet oxygen masks on board every fire, police and emergency medical service rescue truck, recently donated six pet resuscitation kits to the squad.

According to Deanna Jones, PEVRS executive director, it was squad member Gabby Wooten who originally heard about AIR FOR PAWS and the nonprofit’s mission. After reaching out earlier in the year regarding obtaining the equipment, PEVRS received six pet resuscitation kits Wednesday, April 21 — one for each of the organization’s ambulances and the PEVRS quick response unit.

Jones said the kits came with two sizes of masks, a small and a large, which each include a rubber end that can be removed in order to provide the best fit. The kits also contain CPR instruction cards and airway breathing instruction cards as well as two leashes.

She added the kits can be used to resuscitate or provide supplementary oxygen to animals who have been in house fires. Pets can be ventilated by connecting the masks to oxygen, or the masks can be hooked up to bags the squad already uses for humans.

And it’s not just canines and felines who will benefit from the live-saving devices. The kits can be used on any pet.

“It is not limited to cats and dogs,” Jones said. It could be (used for) your pet rabbit who lives with you.”

According to Jones, PEVRS has, unfortunately, encountered scenarios in the past in which pets were impacted by smoke inhalation during a house fire. Before, the squad would have no choice but to use equipment designed for humans in order to attempt to resuscitate the animals.

Thanks to the recent AIR FOR PAWS donation, the team now has specialized equipment designed specifically to save furry friends.

“We’re glad to be able to help our community and all the members of their family,” Jones said.