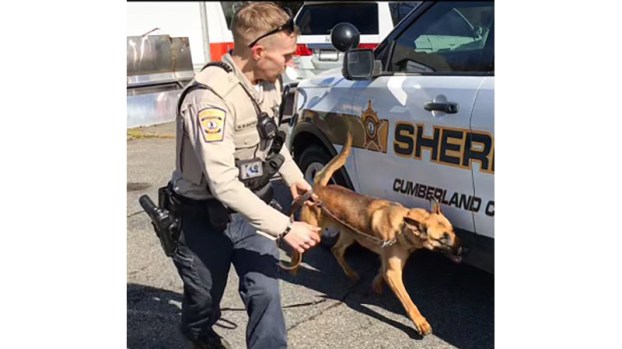 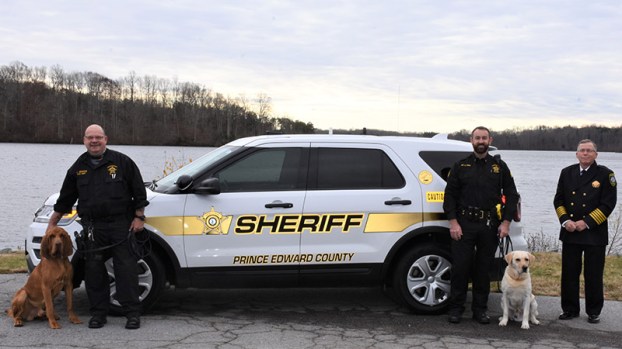 Pictured at left in this photo is Prince Edward Sheriff’s Office Deputy Jason Jenkins with Buford, a 19-month old bloodhound that has been training and will be going to certification school later in April. Buford, donated by Bryan and Carrie Saxton of Cumberland, Virginia, will be used for tracking missing and wanted people. Pictured at right is Sergeant Brandon Yoder with K-9 Badger who due to the new law pertaining to the odor of marijuana had to be retired from working the street. At far right is Sheriff L.A. ‘’Tony’’ Epps. 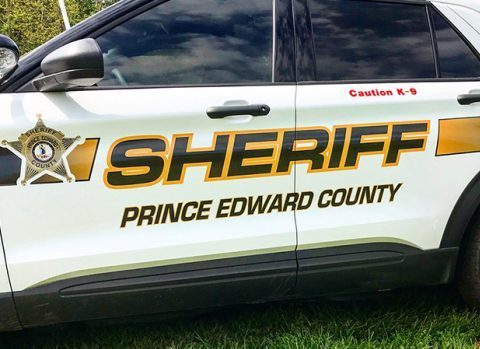 The impending legalization of marijuana in Virginia means many local law enforcement agencies are being forced to retire their police K-9s, leaving several of the area’s drug-sniffing dogs out of a job.

Over the last three and a half years, Cumberland County Sheriff’s Office Deputy Sheriff Ryan Bates has worked as the sole handler of Mambo, a 5-year-old Belgian Malinois narcotics K-9.

Although young for a police K-9, Mambo’s years of duty have been spent ridding the streets of countless firearms and drugs.

Mambo is a dedicated worker, but he had to be taken off the force Feb. 28 of this year.

In March, new legislation went into effect which removes the odor of marijuana as a probable cause for police to conduct any sort of search. Since Mambo was trained to detect numerous narcotics, including marijuana, the new law plus the impending legalization of pot come July 1 of 2021 meant the Sheriff’s Office could no longer allow Mambo to search for narcotics.

Mambo’s unemployment is just one example of a growing problem among police K-9 units across the commonwealth and the country as more and more states legalize marijuana.

The problem, Bates explained during a Wednesday, April 21, interview, has to do with the issue of differentiating between the different drugs a narcotics K-9 can alert to. Since dogs utilized by law enforcement are not trained to alert differently based on what drug they are detecting, handlers cannot determine a difference between an alert for an illegal drug versus the soon-to-be-legal cannabis, nor can they smell a difference between a legal amount of weed versus an illegal amount.

The issue has been getting some agencies in trouble in recent years. According to the Associated Press, a 2015 court case out of Moffat County, Colorado, resulted in a panel of judges ruling the police’s search of a truck illegal after it was determined an officer’s drug-sniffing dog, Kilo, may have been alerting to the scent of marijuana rather than methamphetamines. Marijuana is legal in Colorado for anyone over the age of 21.

In Prince Edward County, part of Sheriff L.A. “Tony” Epps’ platform during his 2019 campaign for sheriff was his strong desire to implement a K-9 program in the county. Epps used to be a bloodhound handler for the Sheriff’s Office back in the mid-90s, but the department had not had any dogs on duty between then and Epps’ recent election.

On Wednesday, Epps explained he started working on developing a K-9 program as soon as he took office. The Prince Edward Sheriff’s Office, he said, received a fully certified K-9, a Labrador named Badger, from the Department of Corrections approximately a year ago. Immediately, Epps sent Prince Edward’s Sgt. Brandon Yoder to a 12-week class to train with the dog.

Yoder and Badger graduated at the top of their class, but the legalization of marijuana means the officer had to stop using the dog.

Although Mambo was retired from the line of duty, Badger, Epps said, was able to be donated to the local Piedmont Regional Jail (PRJ), where he’s now training with a new officer. As cannabis possession is still illegal for inmates at the jail, Badger will still be able to perform his drug-sniffing duties at his new place of work. In the one year Badger was on the force, his biggest bust included more than three pounds of marijuana.

Epps said the dilemma will not stop Prince Edward from developing a K-9 unit. In fact, both Yoder and Bates are currently attending training with new dogs. This new generation of K-9s will not be taught to alert to the scent of marijuana.

Yoder’s new K-9, an 18-month-old German Shepherd named Sig, will be joining him at school. Prince Edward also has a bloodhound who will be attending certification school at the end of April to learn how to track and trail missing people.

However, this new training is still a setback for both departments. Having to send Yoder back to school means Prince Edward will be short one man for 12 weeks, as will the Cumberland Sheriff’s Office while Bates is gone.

Much like humans, many police K-9s find they are lost and unsure of what to do with themselves after retiring, especially at such a young age.

Cpl. Matthew Gatling of the Victoria Police Department in Lunenburg County was the only handler for Sadie, a 4-year-old yellow Lab who had to retire from the police force only a few months ago.

Like the sheriff’s offices in Prince Edward and Cumberland, Victoria’s police department had to make the difficult decision to purchase a new dog in order to eliminate the issue of marijuana alerts. Gatling’s new K-9, a 3-year-old German Shepherd named Jedda, will not alert to the scent of cannabis.

Gatling said Tuesday, April 20, that suddenly being off the job can be emotionally hard on police dogs. Not only is the retirement of the dog a monetary hit to the agency, but it also takes a toll on the animal.

“Police dogs are excited to go to work,” he said. “They like what they do, they like to play. It’s a game to them. They don’t necessarily get to play that game anymore.”

Bates said he was able to adopt Mambo after the dog was retired. He witnessed first-hand the emotional toll of the job loss.

“I definitely noticed a change in his behavior. You could almost say that he was depressed,” Bates said. “He would see me come downstairs, and I would be in my uniform, and he’d start getting excited, spinning around. He knew it was time to work. I’d come downstairs and go out the back door, and he wouldn’t get to go with me. It kind of wore on him, but he’s starting to come around more now.”

And of course, the switch is difficult for the handlers as well. Bates’ new K-9 in training is a 22-month-old Belgian Malinois named Mika. Although she is an extremely intelligent dog, Bates said it will take a long time before he is able to develop the same bond that he had with Mambo, who worked side-by-side with him for years.

“It takes years to build that relationship with the dog,” Bates said.

While marijuana’s legalization has impacted some sheriff’s offices’ work to get a K-9 unit started, it has also played a role in the elimination of some units entirely.

During a Monday, March 12, Buckingham County Board of Supervisors meeting, Buckingham Sheriff’s Office Administrative Lieutenant Brent Uzdanovics approached the board to seek approval of the disbanding of the county’s K-9 program.

Uzdanovics explained the primary reason behind the unit’s dissolution was the fact that the county’s only narcotics K-9, a 13-year-old Belgian Malinois named Nero, was entering his geriatric years and had also begun suffering from age-related dysplasia.

Uzdanovics added that marijuana legalization is just around the corner, and a narcotics dog cannot be untrained to alert to the scent of marijuana. That, compounded by Nero’s age, prompted the Sheriff’s Office to disband the program.

On Tuesday, Uzdanovics highlighted the Sheriff’s Office may consider starting the K-9 unit back up with a dog that is not trained to alert to the smell of marijuana, although officers will likely wait a few years until after the dust of marijuana legalization settles.

Nero’s handler, Erik Bryan, said the talented pup had helped in a variety of cases over the years. One of his biggest successes involved tracking a man suspected of sexual assault a quarter mile into the woods. The suspect was found hiding behind a thick area of brush.

Supervisors agreed Monday night to look into the county paying for Nero’s medical bills after his retirement. Per Buckingham Sheriff Bill Kidd’s request, Bryan was permitted by supervisors to purchase his longtime K-9 companion for the price of $1.