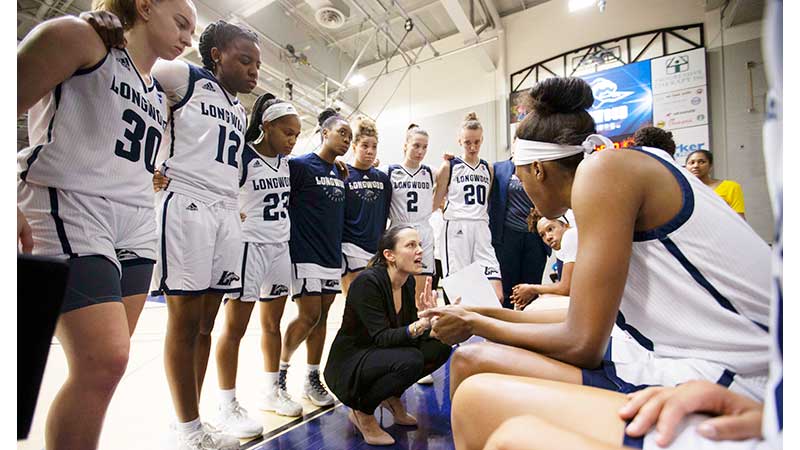 Since taking over the Longwood women’s basketball program in March of 2018, Head Coach Rebecca Tillett has engineered one of the most dramatic program turnarounds in all of Division I basketball.

Now the Lancers will be able to continue their growth under Tillett’s watch for years to come.

Longwood Athletics Director Michelle Meadows announced an extension to Tillett’s contract Thursday, April 22, that will lengthen her tenure as the Lancers’ head coach through the 2024-25 season.

“What coach Tillett has accomplished in just three years is remarkable,” Meadows said. “This past season has been the most visible example of her vision for Longwood women’s basketball becoming a reality, but it’s been the work she and her staff have put in day in and day out since the beginning that has gotten the program to this point.”

The contract extension comes on the heels of a breakthrough 2020-21 season for Tillett’s third-year edition of the Lancers, who went 14-11 overall and 12-6 in the Big South, finished third in the conference, and earned an invitation to the 2021 Women’s College Basketball Invitational – the program’s first-ever Division I postseason bid. The 12 Big South wins and top-three Big South regular-season finish were both program records, while the trip to the Big South semifinals was only the second in program history.

The Lancers reached those milestones with a roster that featured the Big South Defensive Player of the Year in Akila Smith and three All-Big South selections in the first-team forward Smith, first-team guard Kyla McMakin and honorable mention point guard Tra’Dayja Smith. Freshman guard Adriana Shipp was also named to the Big South All-Freshman Team, marking the second straight year that a Tillett-recruited player was named to that freshman squad following Anne-Hamilton LeRoy’s appointment in 2020.

“I look forward to staying immersed in the work with Longwood Women’s Basketball,” Tillett said. “The women who make up this team continue to relentlessly pursue excellence of any kind and are responsible for our ascension. They allow me to authentically lead on a daily basis, and I love every minute with them. To experience this type of success takes the steady commitment of many.”

Longwood’s success this past season under Tillett marked the second straight year the Lancers matched or set the program record for Big South wins. In 2019-20, her second year at the helm, the Lancers won eight Big South games and secured first-round hosting duties for the Big South Championship’s first round. McMakin was named Big South Freshman of the Year, senior forward Dayna Rouse was named to the All-Big South second team, and LeRoy – who was among the first Lancers to commit to Longwood after Tillett took over – was named to the Big South All-Freshman Team.

The cultural shift Tillett has brought to Longwood has produced on the recruiting trail as well, as her first full recruiting class included the Big South Freshman of the Year in McMakin and a record-breaking point guard in Smith, who smashed Longwood’s single-season assists record in 2019-20.

Tillett’s stint at Longwood is her first as a head coach at the collegiate level, following a decorated career as a high school coach in Virginia that spanned nearly two decades. During stops at Osbourn Park in Manassas and Forest Park in Woodbridge from 2001-13, she amassed a 166-72 overall record, three region titles and three district titles while leading both programs to consistent championship contention.

From there, Tillett jumped to the collegiate ranks, first during an 18-10 stop at Division II IUP in Indiana, Pa., in 2013-14, and then at Navy beginning in 2014-15. She experienced a rapid ascent up the ranks on Navy’s bench under two-time Patriot League Coach of the Year Stefanie Pemper, earning a promotion to recruiting coordinator in 2016-17 and associate head coach in 2017-18. During her four-year stint with the Mids, Navy went 81-47, including in 2017-18 when they won a program-record 25 games and reached both the Patriot League Championship Game and the Women’s National Invitational Tournament (WNIT).

In March of 2018, Longwood University hired her as the new head coach of the women’s basketball program.

Tillett graduated from William & Mary in 1999 where she was a guard for the Tribe. After graduating in 1999 with her Bachelor of Science in kinesiology, she embarked on a coaching career that took her from the high school level to the college sideline, and even on the professional circuit where she spent time as a scout in the Women’s National Basketball Association (WNBA) with the Atlanta Dream from 2010-13.

She earned multiple teaching honors along the way, including the 2006 KidBiz3000 Teacher of the Year at Sudley Elementary School and a SPARK Award Hero in Education honor in 2010 at Forest Park.