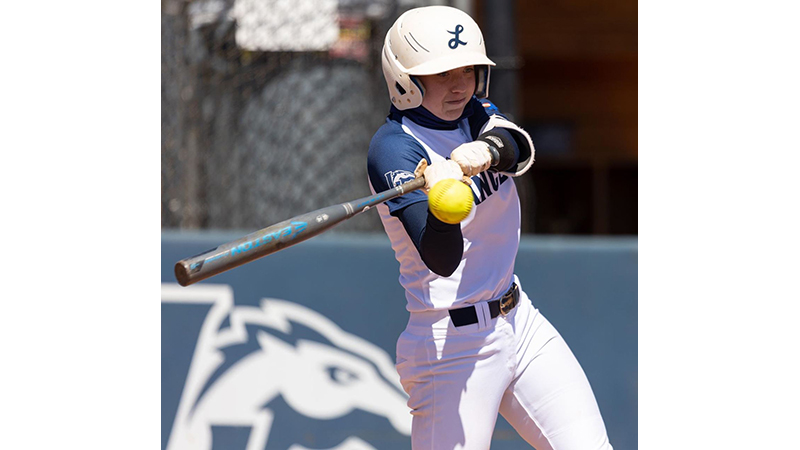 Longwood pitcher Sydney Backstrom, seen here at the plate, won both games for the Lancers Sunday including her fifth shutout of the season. (Photo courtesy of Mike Kropf/Longwood University)

After a 4-1 loss to Charleston Southern in Saturday’s season opener, head coach Dr. Megan Brown said Longwood was on the wrong side of “a game of inches” a few too many times.

Sunday, the Lancers made sure they were on the right side.

In a series-winning doubleheader sweep over conference rival Charleston Southern, Longwood (23-24, 12-6 Big South) backed two strong appearances in the circle from ace Sydney Backstrom with timely hitting and sure-handed defense to pull out a pair of nail-biters, 2-0 and 3-2 Lancer Field.

“They came out with a great mentality this morning, they made good adjustments in pregame and came out ready to go. We had a couple miscues throughout the day but I was really proud of our recovery and our ability to reset, which is such a vital tool as we get deeper into the season. We fought throughout, had good at bats and worked together as an offense, which is our strength. I’m pleased with their response.”

Backstrom (18-11) won both games Sunday, throwing her Big South-leading fifth shutout of the season in the opener before starting and finishing a 3.2-inning performance in the one-run finale. The reigning and four-time Big South Pitcher of the Week, Backstrom allowed just one run on six hits for the day while striking out 12 in her 10.2 innings.

The lone run Backstrom allowed came in her first inning of work in game two – after a three-hit shutout in game one – when Buccaneer leadoff batter Brooklyn Brewington scored on a wild pitch. However, Backstrom responded with a scoreless second inning before giving way to Angelina Sherba – who fired three scoreless frames in the middle innings – and returned to navigate a one-out jam in the sixth and close out the series-clinching victory with a scoreless seventh.

Longwood backed her performance with a defensive effort that included just two errors while converting 30 of the doubleheader’s 42 outs in the field. Backstrom made both of those errors but her defense bailed her out each time, making those baserunners two of the 14 Charleston Southern stranded on the day.

At the plate, shortstop Kasey Carr and second baseman Destiny Martinez – both fifth-year starters and graduate students – delivered game-winning RBIs. Martinez had the first of those with a two-out, two-run single in the second inning of game one, while Carr followed with a go-ahead sacrifice fly in the sixth inning of game two, which followed a leadoff triple by cleanup hitter Lauren Taylor.

Those wins improved Longwood to 12-5 in games decided by two runs or fewer this season, including 6-0 in Big South play.

“We talk a lot about everything being a learning process, even though the learning isn’t always as pleasant as we would like it to be,” Brown said. “These are games that grow us and help us become better. We’ve had a lot of days that were tough, and we’re learning and starting to make those adjustments.”