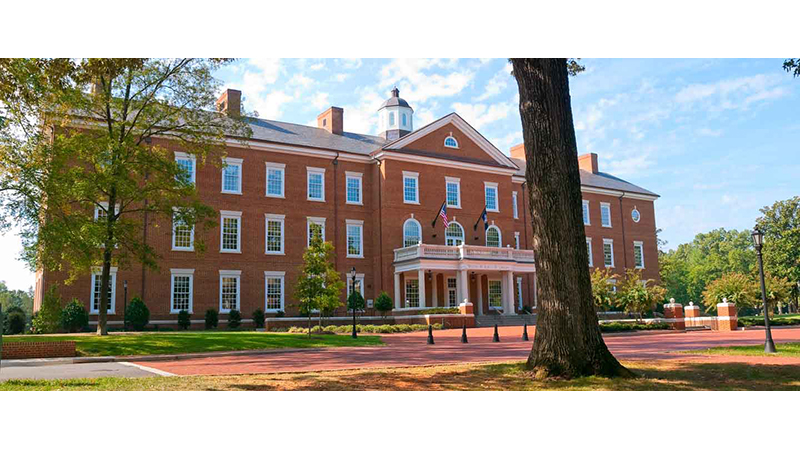 Hampden-Sydney College announced a $12 million gift from the estate of the late Mr. and Mrs. M. Blair Dickinson, Jr. ’37 Tuesday, April 13. The Dickinsons’ gift is the second-largest in the college’s history.

Aside from his service as a naval officer during World War II, Blair Dickinson spent his career as an educator, beginning as a high school principal in Fauquier County. He and his wife, Lucile, later took on assignments at American Dependents’ schools at overseas postings in Japan, Germany and Italy. Dickinson concluded his career at Leesburg High School in Florida. He passed away on September 11, 1984, in Boynton Beach, Florida. His father, M. Blair Dickinson, Sr., was an 1892 graduate who served on the college’s Board of Trustees for many years, and Hampden-Sydney’s history has many examples of Dickinson family members attending and supporting Hampden-Sydney.

Blair Dickinson’s widow, Sarah “Lucile” Lawton Dickinson — who was also a World War II veteran, serving in the U.S. Marine Corps as a member of the women’s division of the aviation corps and rising to the rank of sergeant — outlived her husband by nearly 35 years, but she remained committed to their original plan to leave a significant portion of their estate to his beloved alma mater.

The Dickinsons met shortly after WWII when they were instructors at North Carolina State University. They both believed strongly in the power of education, and Lucile Dickinson maintained her connection with Hampden-Sydney College in the decades that followed the death of her husband. She passed away in Boynton Beach on May 7, 2019, at the age of 95.

“Furthering their lifelong commitment to education, Blair and Lucile Dickinson’s incredible act of devotion and generosity will forever support the college’s mission and its academic program,” President Larry Stimpert said. “Let us all be humbled by, and grateful for, their lives of service to education and their decision to honor the college in their estate plans. Their generosity secures for them an enduring legacy in the storied history of Hampden-Sydney College.”

“Lucile Dickinson was long admired and respected by the Hampden-Sydney community, and we are incredibly moved by this remarkable act of generosity,” Vice President for College Advancement Heather Krajewski said. “In celebration of this historic gift, the college will make sure the Dickinsons’ lifelong devotion to education will have an indelible impact on our students, faculty and campus. An investment of this magnitude helps us enhance Hampden-Sydney’s reputation as one of the finest small liberal-arts colleges in the nation by supporting the people and programs that are the cornerstone of our rich and distinctive experience.”