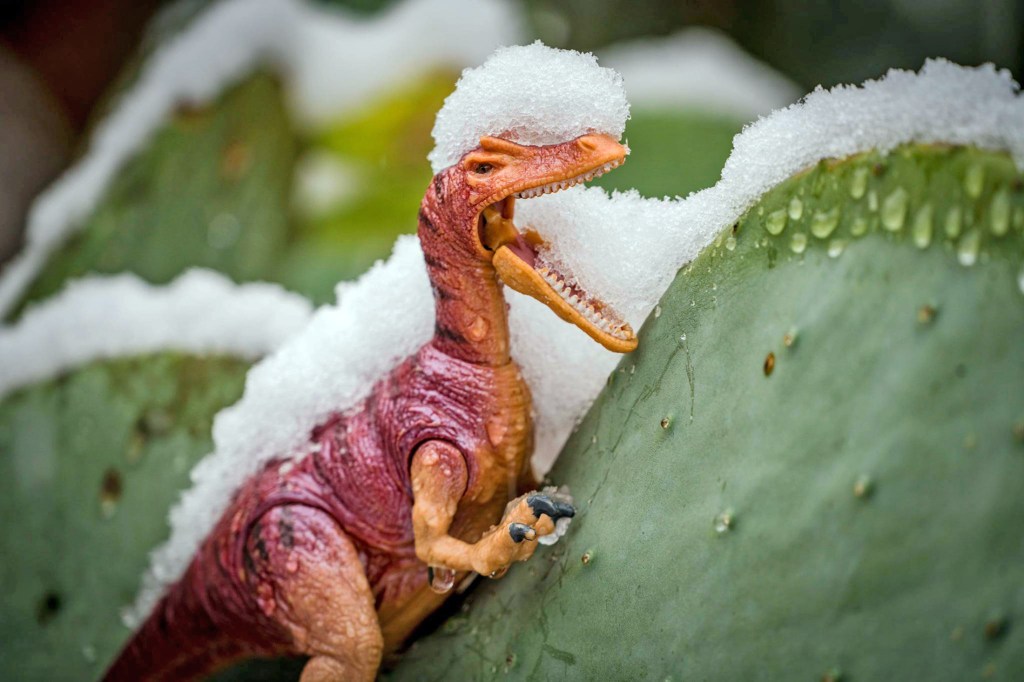 A dinosaur, snow and a prickly pear cactus? You just never know this year. (Photo by Sara Wood)

Every spring, I look forward to participating in several workshops on gardening.

If I get one or two new ideas for what to plant or how to plant it, then I’m happy and recharged for the new season. Most of these programs are sedate affairs with coffee, tea and polite queues for autographs. Gloves and pearls are optional. Sometimes, however, there are surprises.

One year a friend and I attended a late February event in Richmond. About halfway through the day, we both began to receive odd texts from my friend’s husband, “Leave, leave, leave now,” he said. We ignored him for a while and then the texts escalated. There was a huge snowstorm in the Farmville area, and it was headed our way. There was no snow when we left Richmond, but by the time we got to Midlothian, there were flurries. By the time we got to Amelia, we thought we were in a blizzard. You just never know what will happen.

This year has been different. While both large and small programs have been available, they’re all on Zoom. (Sigh.) A two-day program, that’s 10 hours of Zoom time, is challenging, tedious and often fraught with technology issues. Sometimes the issues are of a more personal sort.

I signed up for my usual February winter gardening symposium hoping for inspiration about new plants and new ways to design for small spaces. Some of the presenters were based in England and were big names in landscape design. The first presenter looked as if he’d been on an all-night bender and had just rolled out of bed. He had excellent material, but seemed bored with it, and I suspect he had forgotten that his audience could see him. The second one hadn’t combed his hair in days, but was chipper, enthusiastic, and had brilliant material. I was fully engaged. And then, there was a very loud, odd noise that seemed to come from under his very messy desk. Well, the man stopped talking in mid-sentence, jumped up, and announced that his dog had just thrown up on the floor! He evicted the poor dog and began again. Five minutes later, there was loud whining at the door. The dog wanted back inside. And so it went for the rest of the presentation.

While snowstorms aren’t a problem this year, Zoom presentations in the age of COVID are fraught with technology problems and delays. People have apparently forgotten that they can be seen. Nevertheless, a Zoom conference is better than nothing and can still lead to a few insights. What did I learn? Lock small animals away during a presentation, get plenty of sleep the night before and expect the unexpected.

In fact, embracing the unexpected is probably the only gardening advice I’ll need this year. Just work in the garden. You’ll feel better.