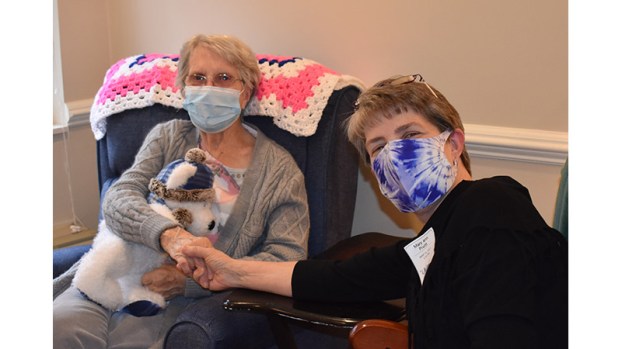 Mary Ann Pruitt, right, sits with her mother, Janice Mahone, during their first close contact visit in over a year at The Woodland in Farmville.

It was in the turbulent month of March 2020 that The Woodland, in Farmville, first went into lockdown in response to the coronavirus.

Under the guidelines, which began March 16, one to three adults per visit are allowed for close contact visitations with fully vaccinated residents who are not residing in a unit where other residents are in isolation.

For the older adults under The Woodland’s care and their loved ones, these reunions have been emotional, unforgettable and deeply cherished.

Before lockdown, Mary Ann Pruitt, a family nurse practitioner who lives in Farmville, would visit her mother, Janice Mahone, several times a week.

Mahone, 82, has Alzheimer’s and lives in the Watson Memory Care Center. She’s been at The Woodland since 2015.

Describing the day she first found out The Woodland was having to limit visitation in response to the pandemic, Pruitt said she arrived at the facility March 12 of 2020 to take Mahone for a doctor’s appointment when she was stopped at the door.

She learned that she could not come into the building and her mother could not come out. An employee, according to Pruitt, mentioned the site would probably be locked down for a couple weeks.

Even then, Pruitt, a health care worker, knew it might have been wishful thinking.

“And I told her,” she recalled, “‘No ma’am, you’re probably going to be locked down for two to three months.’”

If only it had been that long.

Although Pruitt was able to take her mother to the doctor that afternoon, that day was the start of a new reality for Pruitt and other residents with loved ones living at The Woodland.

Siblings Steve Bickford and Becky Gallamore, of Buckingham, visited their mother, Lois Bickford, many times a week before the pandemic. Now 89, Lois resides in the Lee wing at Holly Manor, where she’s been since 2017.

When The Woodland stopped visitations in March, Steve was busy caring for his wife who was in the last stages of her life after a long battle with brain cancer. For such a connected family, not being able to be together during such a tragic time was difficult. After Steve’s wife passed in mid-April, caring staff at The Woodland helped break the news to Lois, who recently had some health issues of her own earlier that year.

It was a big change for Steve and Gallamore to suddenly be unable to see their mother face to face, to talk and hug with her. Steve and Lois used to get together at least once a week at the dining hall to share a meal, but that, like many things, all went away.

Although Lois is one tough cookie, her children said she really missed the value of the volunteers who were always coming to The Woodland to play music or do fun activities.

As The Woodland grappled with the task of keeping residents, staff and their families safe from the virus, the facility had to find new ways to keep loved ones connected.

For Steve and Gallamore, they stayed in touch with their mother in a variety of ways, including video conferencing and “window visits” where Lois talked to her children using a telephone or microphone while separated by a window. The family was also able to do some socially-distanced outdoor visits before the state of the pandemic grew worse.

For Pruitt, the process of staying connected with her mother was more trying. Aids would bring Mahone to the window of the facility’s cafe where the two could see each other and talk via the phone. But with a mother battling Alzheimer’s, the arrangement did not seem ideal.

Before the weather got cold, staff would sometimes be able to let Mahone come to the side door of a gated patio. She could stand on the inside of the building with the door open while Pruitt was just outside the gate, and the two could talk back and forth. But the situation was also not ideal for a memory patient and began to make Mahone distressed.

Pruitt said the ordeal was likely worse on her than her mother, who does not have a strong concept of time.

“In that respect, her loss of timeframe and loss of memory has been a good thing in the pandemic because she doesn’t realize how long it’s been since certain things have taken place.”

Pruitt was able to continue taking Mahone to the occasional doctor’s visit, but it would sometimes be difficult to remind her to keep her mask on, and she would need to be quarantined to her room for two weeks following the appointments.

As time went on, both families witnessed the news of other nursing homes across the state with large coronavirus outbreaks, including reports of facilities where many residents had died after contracting the virus. There was a lot of praying and wondering involved.

As the coronavirus grew more and more prevalent with numbers and risk increasing, the memory care center, Pruitt added, needed to be locked down for the protection of all. Neither residents nor employees crossed over to other parts of the building.

The Woodland was not without its own outbreaks. While confirmed cases never occurred in the memory care center, positive COVID-19 cases did pop up at Brookview and Holly Manor.

Residents sometimes had to quarantine, which Steve said was difficult on his mother but necessary.

In fact, Lois tested positive for the virus at the end of February.

“That was the hardest,” Gallamore stated while recalling the difficulties of the last year.

Thankfully, Lois experienced almost no symptoms during her bout with COVID and came out of isolation feeling healthy.

As The Woodland’s hard work paid off, the facility began to offer some forms of distanced visitation. Pruitt and her mother could sit in the front lobby for a monitored visitation where they sat at either end of a banquet table and could talk.

Unfortunately, that, too, didn’t aid much in jogging Mahone’s memory or producing conversation.

It was Monday, March 15, that a major milestone was reached. Pruitt made a call to schedule another front lobby visit when a worker informed her that the meeting couldn’t be arranged. There had been a policy change only a few hours prior, and beginning the next day, close contact, in-person visitations would be available for vaccinated residents.

Although the policy requires visits to be scheduled 48 hours in advance, as the policy was brand new, Pruitt was approved for a close contact visit the following day.

Although her mother did not really know anything was different, the visit was monumental for Pruitt as she hugged her mother and held her hand while masked up in Mahone’s bedroom Tuesday, March 16.

Being in a familiar setting helped to calm Mahone and made being in the moment and talking much easier. Pruitt was also able to call up a few loved ones who had not spoken to Mahone in a while for some small conversation.

For Pruitt, who can often be found administering COVID-19 vaccines to others at her place of work, the close contact visit almost felt a little funny.

“It’s hard to go backwards,” she said of the social distancing.

For Steve and Gallamore, their first close contact visit Monday, March 22, on the day of Lois’ 89th birthday, marked the first time in over a year the siblings had been able to hold their mother.

The emotional moment made it hard to hold back tears.

“Are we really doing this?” Gallamore thought to herself. “Finally?”

“It was the unbroken circle of love,” Steve remarked. “I get emotional thinking about it right now because it was Mom’s birthday, but it was Becky and I that were given the gift that day.”

In such a scary and challenging year, keeping the community’s older adults protected against the coronavirus has been quite the task, and so is helping those older adults cope with the stressors of isolation and the unknown.

It was a long road from lockdown last March to close contact visits this March, and Pruitt, Steve and Gallamore all applauded the work done by The Woodland to get everyone here.

“I’m grateful to all the staff there,” Pruitt said. “You don’t get to talk to them or tell them ‘thank you’ really because of the separation … They’ve been excellent at protecting their residents from the virus, which is very hard to protect people from, especially in that situation.”

Class of 2021 has been defined by pandemic

One year ago, high school seniors had much of their final semester ripped away from them by the coronavirus pandemic.... read more