Cartersville Rescue Squad is shutting down 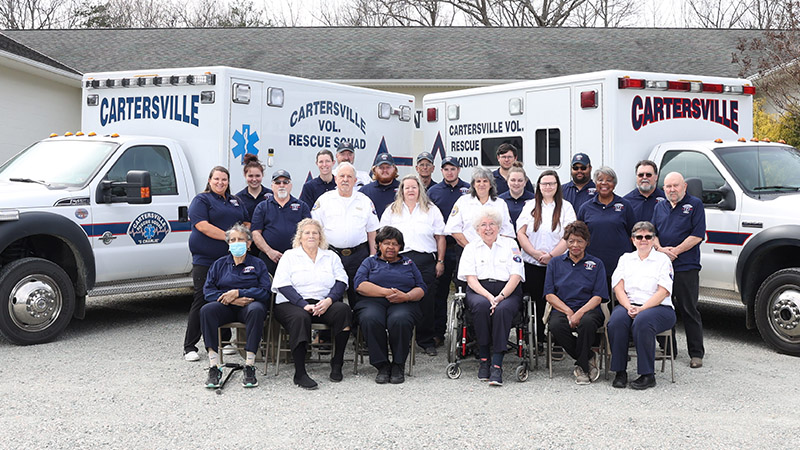 This is a recent photo of Cartersville Volunteer Rescue Squad members. The squad recently announced it will be closing its doors following a drop in volunteerism. A new, 12-hour, paid crew will begin serving the Cartersville area May 1, and the volunteer rescue squad will cease operations July 1.

According to Squad President and CVRS Member of 21 years Earlene Canaan, the decision to stand down follows national trends of volunteerism issues.

Canaan said the squad was conceived long ago by Cartersville community members who recognized a need for emergency medical services in their area. A small group was formed as part of the local fire department as a service to be provided until an ambulance could arrive from the courthouse area.

After additional community members became involved and realized there was a better way to provide the services, the CVRS became a separate identity and the agency was formed. Over the years, the community has supplied the organization with money, helped to build a CVRS building and much more.

But the squad has not been without issues.

According to Canaan, in recent years CVRS began to suffer the same problem seen nationally of an inability to recruit volunteers willing to go through the long and arduous training process to become EMTs. The squad’s number of active EMTs dwindled and dwindled, and the hours the squad could have a crew on the road began to drop.

Today, the squad is only able to provide four hours of service from 6-10 p.m. three, sometimes four evenings a week.

Around 2017, CVRS joined the county’s department of fire and EMS in order to be licensed under the county.

In working together, the squad and the county have made arrangements for the implementation of a paid squad to be stationed in the north end of Cumberland in order to provide rapid response to citizens. That decision also means the end of an era for CVRS.

“When you no longer can provide the service for which you exist, that’s the time to close the door,” Canaan said during a Monday, April 26 interview.

While it is disappointing to see the organization dissolve, Canaan added the transition will mean much better coverage for citizens, who will now have the emergency medical service and rapid response they need.

According to Chief of Cumberland Fire and EMS Tom Perry, CVRS will cease operations July 1 of 2021. However, the county will implement a new, paid, 12-hour crew in Cartersville starting May 1. The crew will operate from 10 a.m. to 10 p.m. seven days a week, 365 days a year.

In discussing the dissolution of CVRS, Perry added the Cumberland Volunteer Rescue Squad suffered the same issues several years ago, ultimately leading the squad to also turn operations over to the county.

After the transition, he added, the county will have two ambulances on the road at all times; the 12-hour crew stationed out of Cartersville and a 24-hour paid crew located in the courthouse area.

Per state law, CVRS will give its two active ambulances to the county which will be on reserve should more crews be needed.

Perry highlighted Monday his confidence that residents will receive adequate service after the transition takes place.

“Between those two paid staff crews, all the citizens of Cumberland, their 911 calls and emergency transport needs will be met.”

He added Cumberland County’s EMS call volume remains lower than 1,000 calls per year. He also said should officials ultimately find the call volume increases and more service is needed to cover the whole county, services will be increased to provide two 24-hour ambulances as needed.

The new paid crew, according to Perry, will be stationed out of the Cartersville Volunteer Fire Department Station 3 at 1600 Cartersville Road.

Canaan said CVRS currently has 26 active members, 19 of which are EMS members such as EMTs, drivers and aides and seven of which are associates who help with fundraisers and serve as officers of the corporation.

She added CVRS’ current EMTs or drivers who wish to continue to provide service to the public will now have the opportunity to run for Cumberland Fire and EMS.

Perry stressed the years of service CVRS has provided to citizens of Cumberland, adding a lot of work has been done to make this transition as seamless as possible. He noted Cumberland Fire and EMS is looking forward to partnering with any volunteers who wish to continue their services with the county.

“Their commitment of excellence and service is unmatched,” he said.