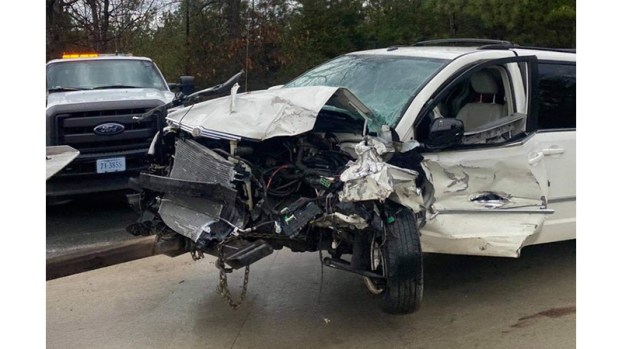 Two people were killed in a crash Saturday, March 27, on Gravel Hill Road in Buckingham County. (Photo by Mark Schneider)

Last year was the worst time frame in recent years for Buckingham County in terms of unrestrained deaths, but the county has already matched that number in the first three months of 2021 alone.

According to a Virginia Department of Motor Vehicles (DMV) interactive crash data report, Buckingham County experienced a total of six deaths as the result of motor vehicle accidents on local roadways in 2020. Five of the six fatalities, or 83%, involved a person not wearing a seat belt. This was a dramatic increase from the 46% over the previous five years.

But the year 2021 is looking even deadlier. In just the first three months of the year, the community has been rocked by five motor vehicle deaths, all five of which involved an unrestrained person. If the trend continues, unrestrained fatalities in the county could be more than three times that of 2020 by the end of the year.

What is causing the uptick and how more unrestrained deaths can be prevented is something officials are thinking about.

“The Virginia State Police (VSP) personnel assigned to our Area 19 Office, which encompasses Buckingham and Cumberland counties, are very aware of the seriousness of the crashes that have and — sadly — continue to occur in Buckingham County,” VSP Public Relations Director Corinne Geller said. “Traffic safety is a core function of state police and fulfilled through proactive enforcement and educational efforts employed across the county, region and state.”

Geller said Wednesday that from an enforcement perspective, state police participate in the “Click It or Ticket” campaign periods and the Crash Awareness Reduction Effort (C.A.R.E.), which includes occupant safety as one of its key safety principles. She added citing violations of Virginia occupant restraint laws is another effective means of spreading seat belt safety awareness.

“But, we also recognize that enforcement, proactive and reactive, can only do so much to impact driver and passenger behavior when it comes to buckling up. Thus, state police also work to reach the public where they’re at — through social media, traditional media, youth engagement, safety presentations to civic and church groups and, of course, by always setting a positive example.”

Geller said compliance with occupant protection laws on behalf of Buckingham County residents is especially important due to the fact that state police are only operating at 50% of their authorized strength in Area 19.

“We are allotted 10 trooper positions to cover all of Buckingham and Cumberland counties. Only six of those positions are filled as of today thanks to two new trooper graduates arriving in January 2021,” she added. “Thus, having the manpower and time to dedicate to the proactive and public outreach efforts is challenging.”

Brent Uzdanovics, administrative lieutenant for the Buckingham County Sheriff’s Department, said Wednesday that most of the county’s traffic crashes are occurring on secondary roadways, and there does not appear to be a pattern in what roads the accidents occur on.

Uzdanovics pointed to data of the three fatal accidents to occur in Buckingham this year, two of which involved multiple fatalities. The three accidents occurred on Howardsville Road, Gravel Hill Road and Blinkys Road. One incident involved alcohol, and two of the accidents were speed-related.

“Likewise, the Sheriff’s Office is concerned with the higher number of unrestrained traffic deaths that have occurred in our county,” Uzdanovics said. “Being only four months into this year, it is likely that we may see additional preventable traffic deaths. We cannot stress the importance of buckling up each and every time you get behind the wheel. If worn, the likelihood of surviving a crash is greatly increased, putting you at less risk of death or serious harm.”

Uzdanovics said in the past, alcohol-related unrestrained crashes dominated the area. But now, authorities are seeing a shift in trends toward unrestrained single-vehicle crashes resulting from distracted driving.

“The sheriff’s office would like to see this trend reversed and maintains a partnership with the Virginia Department of Motor Vehicles Highway Safety Office to proactively address these concerns.  As joint stakeholders, we are tasked with educating our community about preventable traffic crashes as well as effective enforcement of traffic laws in hopes of curbing these tragic trends.”

Casey Taylor is the program development coordinator for Youth of Virginia Speak Out About Traffic Safety (YOVASO). Just this week, the group kicked off its spring campaign, Arrive Alive, in schools and youth groups across the state. The safety campaign seeks to establish safe driving and passenger safety behaviors by focusing on the increased risk of teen driver crashes during the spring and summer months.

In a recent release, YOVASO said more teen drivers in Virginia will be involved in traffic crashes between the months of May and August than any other time of the year. Statistics also show 63% of the Virginia teens killed in crashes in 2020 were unrestrained.

“Although young driver-related crashes were down in 2020 in Virginia, we had an alarming 12% increase in fatalities among young drivers to risky behaviors such as speeding and not wearing a seat belt,” YOVASO program manager Mary King said in the release. “If we are going to save lives, we need our youth to use their positive influence to change these high-risk behaviors and attitudes.”

Taylor said currently, YOVASO does not have any member schools or youth groups in Buckingham county participating in its program.

In 2020, state police and even local law enforcement saw a dramatic increase in heavy speeding violations, including triple-digit speeds, as the COVID-19 emptied roads and caused a decrease in law enforcement prevalence on the roadways, leaving some residents with a lead foot.

On Wednesday, Cody Davis, Buckingham County Department of Emergency Services director, said the pandemic may also be behind some of the accidents the county has seen this year.

Davis said some residents might be influenced by the good weather and the easing of social distancing guidelines, taking to restaurants and bars and in turn making poor decisions. He added it is likely some safety campaigns have been prioritized less as public health and safety employees devote the majority of their attention on responding to the pandemic. He pointed out COVID-19 has also led to an increase in motorists letting their inspection stickers and registration tags expire.

When asked why citizens are still choosing to drive or ride in a car without using their seat belts despite knowing the risks, Davis added some residents may refuse to buckle up due to issues with authority.

“I think, psychologically, people have an issue with following authority sometimes. Sometimes, just because somebody’s telling them to do it, they’re not going to do it,” he said.

Pearline Miles didn’t realize right away that the Virginia Lottery ticket she had just scratched was a $300,000 winner. However, when... read more