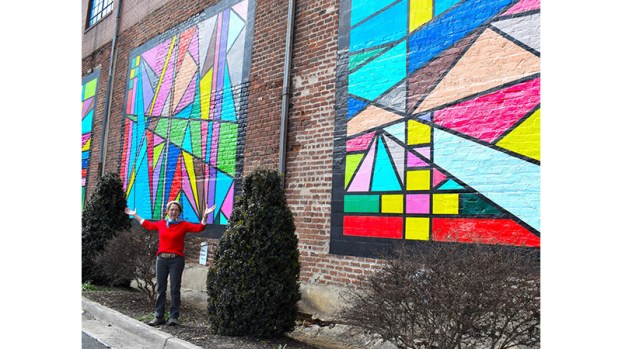 Painting the town with outdoor art started in 2014 with a larger-than-life mural on a North Street warehouse. Pam Butler, owner of Mainly Clay and head of the design committee for Farmville Downtown at the time, commissioned artist and Longwood alum Monty Montgomery to create the Warehouse Triptych Mural. 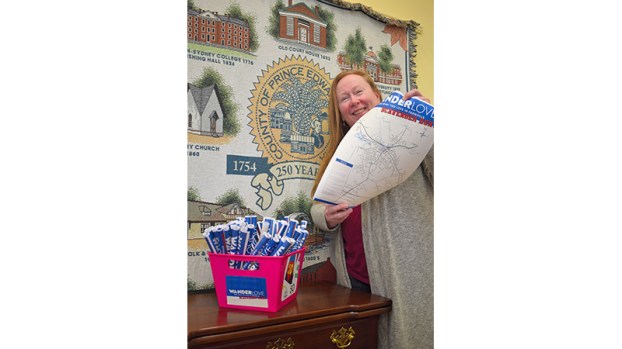 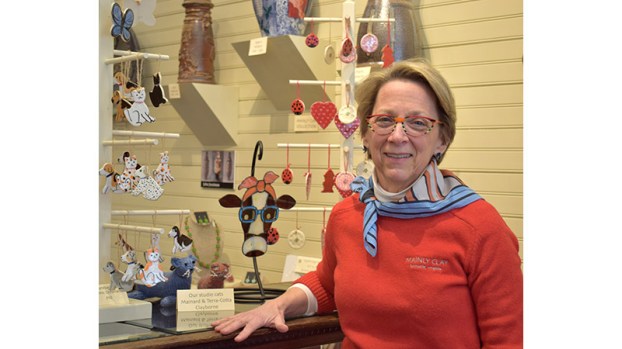 Pam Butler helped coordinate numerous projects to beautify downtown, including Farmville’s street banner program and the Two-College Town mural that was located on the Doyne Building before its renovation. 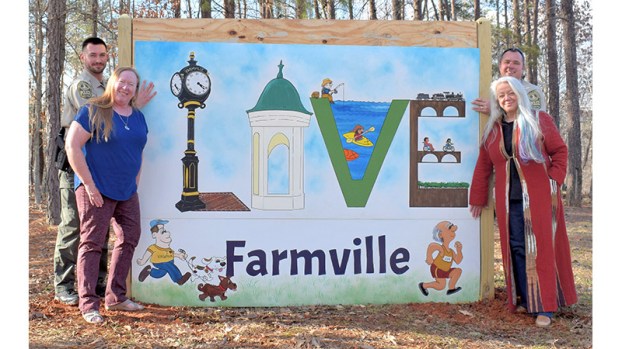 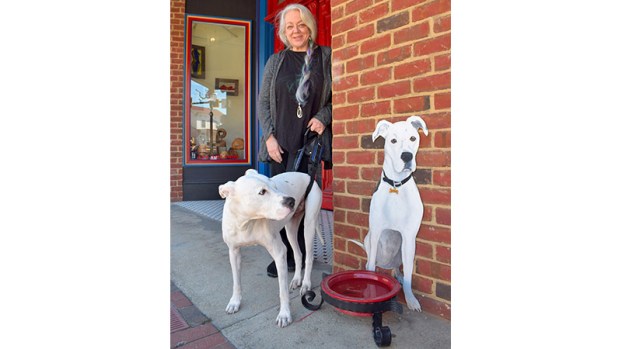 Lago admires a portrait of himself welcoming visitors to Red Door 104. 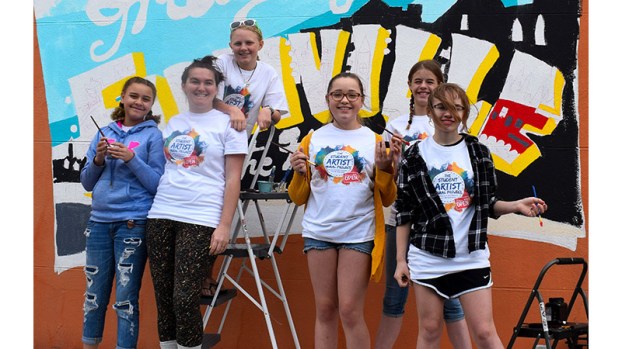 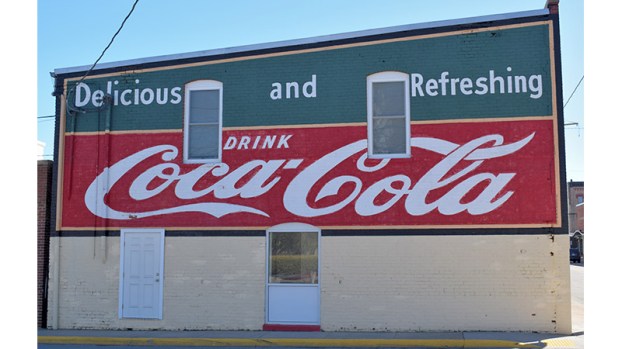 Two of Farmville’s “ghost murals,” originally created during the 1920s, were restored in anticipation of the U.S. Vice Presidential Debate in 2016. 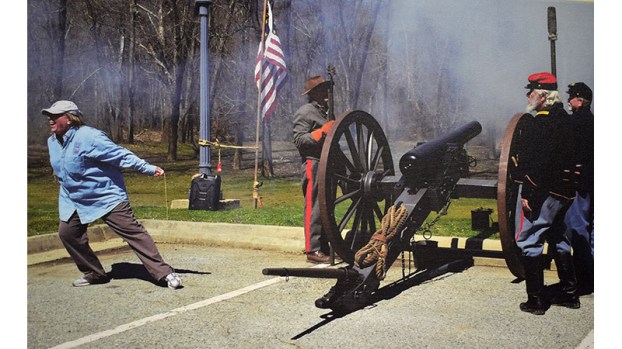 Magi Van Eps makes a hasty retreat from the field of battle after firing a cannon at a Riverside Park reenactment during the town’s Civil War sesquicentennial celebration in 2015.

Story and photos by Marge Swayne

What do tourism and art have in common?

The answer, according to Magi Van Eps, is everything.

Van Eps, who retired in February after 14 years as the tourism coordinator of Prince Edward County, recently launched an art-related scavenger hunt that is already bringing tourists to the area. The focus is outdoor art on display all over the town.

“Everyone loves a scavenger hunt — and who doesn’t like art?” Van Eps said.

Farmville has four LOVEworks signs in and around town.

LOVEworks, established by Virginia Tourism in 2013, was designed to promote travel in Virginia and strengthen awareness of the “Virginia is for Lovers” message.

“Our theme for the WanderLove campaign is our hashtag: #FindWhatYouLoveInFarmville,” Van Eps said. “Visitors can pick up a treasure map at the visitors center and follow the clues to local art, most of which is outdoors. Everyone who brings back a treasure map, even partially completed, gets a grab bag prize.”

“When we put together the treasure map for our scavenger hunt, we had no idea how much art Farmville actually had,” Van Eps added.

“We have the Longwood Center for the Visual Arts (LCVA) and Central Virginia Arts (CVA),” Van Eps said. “CVA turned Riverside Café into an art gallery where you can have breakfast or lunch and even buy the art off the wall.”

Farmville shoppers also have artistic choices on Main Street: Red Door 104 and Mainly Clay, and both offer classes along with original art.

Pam Butler, who owns Mainly Clay, was part of the effort to launch Farmville’s outdoor art trend in 2014.

“Sally Thompson and I met with Longwood alum Monty Montgomery to see if he was interested in doing a mural,” Butler recalled.

Montgomery, an artist specializing in wall and mural art, was happy to share his artistic talent, and the larger-than-life mural adjacent to the Farmers Market was the result.

Artistically speaking, the handwriting was on the wall. Farmville began taking the arts to the street in new and varied ways.

Montgomery’s blaze of color on the aging North Street warehouse was just the beginning of an ongoing effort to beautify downtown.

In 2015, the effort to beautify Farmville began in earnest after Longwood University was selected as the site for the U.S. Vice Presidential Debate.

Downtown Farmville, under the leadership of design committee chair Pam Butler, started a street banner program that placed patriotic flag-themed banners at every street corner. The banners were particularly eye catching during the 2016 debate when “the eyes of the world” were, in fact, focused on Farmville.

Another debate project was the restoration of two vintage Coca-Cola murals, one on Main Street and the other on the corner of North and Third streets.

As journalists from around the world arrived to cover the debate, Farmville was ready for the cameras, complete with Uncle Sam, aka John Burton, strolling along Main Street.

“I think Farmville’s experienced a renaissance,” Burton said at the time. “There’s a kind of magic in town that seems to attract people and keep them here.”

That magic seemed to inspire local artists as they continued to add art on a variety of canvases.

Painting the town with student art was an idea literally brought to the table at the town’s annual SOUP event in 2017.

Supporting Outstanding Urban Projects (SOUP), a Downtown Farmville event to select proposals to improve the community, awards grants to several winners each year. Voting is done by community members literally bringing their ballots “to the table” to vote for favorite proposals.

With grant money from SOUP, York’s young artists, ages 12 to 21, hit the streets with new ideas and colorful designs. York’s student artists consider their project a work in progress. To date they’ve completed six murals and continue to make plans for more.

“Currently we’re collecting new ideas,” York commented. “We have a block-long wall to divide and fill with student artwork as well as three large spots on the corner of North and Third streets.”

Van Eps found her job over the 14 years she served as tourism coordinator fulfilling.

“I was lucky because I got here in 2006 just as the state was getting ready to celebrate the 400th anniversary of Jamestown,” Van Eps recalled.

Not to be outdone, Van Eps located a James Town closer to home.

“We found a James Town on the border of Amelia and Prince Edward counties; it was the first town in Prince Edward,” she said. “The framework of the town’s still there along with a very, very old cemetery.”

“We held events for the descendants of the people, both black and white, living there in the 1700s,” she added. “I was also involved in Farmville’s two lights of reconciliation, the World War II memorial, and the ‘In the Line of Duty’ World War I memorial.”

The Civil War sesquicentennial in 2015 was another memorable tourism event.

“A living history group approached High Bridge Trail State Park about the event,” Van Eps recalled. “They wanted to encamp, march across the bridge and reenact what actually happened during the final days of the Civil War.”

“This group was hard core,” Eps added. “They wanted to fire real weapons.”

Even with blanks in place of bullets, the state park decided that would not be a good idea.

“So, at the last minute we had no one. Unbelievably, we found a General Grant and General Lee who weren’t booked for that date,” Eps said. “Cumberland reenactor John Butler (also known locally as Civil War Santa) even brought his cannon to Riverside Park.”

“I got to fire it once,” Van Eps recalled.

An enlarged photo of the event still hangs in a place of honor on her office wall.

Many fond memories of Farmville, like the photo of Van Eps’ hurried exit from the field of battle, go with her as she leaves for Texas.

“Farmville’s really thriving now, and I’ve been privileged to be a part of that,” Van Eps concluded. “Our visitors see what I’ve seen — Farmville is the coolest town around!”