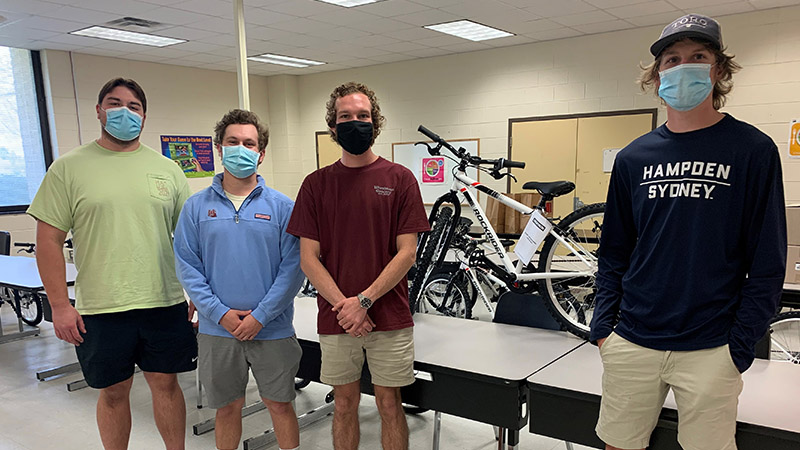 At the root of this idea three years ago was Cycling Club president Andrew Howell ’20, a biochemistry and molecular biology major who wanted to empower middle schoolers to develop strong study habits and positive behavior. “Middle school is a perfect place to start good habits in preparation for high school,” he said. David Fluharty ’19, Cycling Club vice president, agreed, adding, “So many students miss out on opportunities because they’re not motivated in high school, so we thought we could incentivize a good work ethic early. We especially wanted to reach those who didn’t already have those good study habits in place.”

They devised a plan to reward middle school students with a ticket voucher every time they successfully turned in their homework or were recognized for good behavior. Prince Edward County Middle School Principal Thomas Foster helped devise the details of the reward system so the competition would be fair for all students. Middle schoolers earned tickets in the spring semester then entered them in a raffle drawing for a new bike in April. The more assignments they completed, the better their chances of winning a bike. The Hampden-Sydney students even created an inspiring name for the program based on the Prince Edward County Eagles mascot — “Taking Flight.”

This year, Cade Davidson ’21 and Justin Stimpson ’23 of the Cycling Club, and Gray Breeden ’21 and Tyler Howerton ’21 of ODK successfully raised enough money from the Hampden-Sydney community — over $6,000 — to purchase 20 all-terrain bicycles with accompanying safety gear.

On April 14, PECMS students excitedly gathered on Zoom to witness the raffle drawing and announcement of the winners. Twenty lucky (and hardworking) students took home brand new bikes and helmets.

“It has been a joy working with these Hampden-Sydney students and watching their ideas come to life while inspiring the children of Prince Edward County,” Sandy Cooke, director of civic engagement at Hampden-Sydney, said.