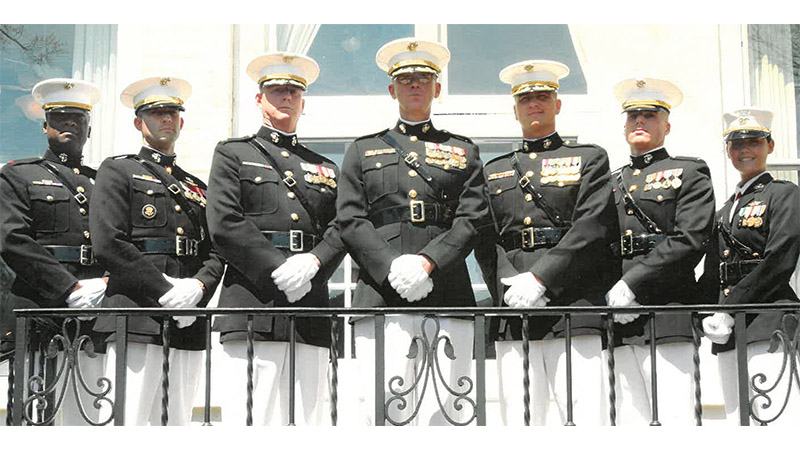 Jim Wiecking, center, served for 21 years as a member of the U.S. Marines. He now works in the Research and Grants Office at Longwood University.

Jim Wiecking currently spends his workday helping Longwood University get grant money to do research projects as part of the Research and Grants Office.

“We work on processing and identifying grant requests for staff and faculty to further their research or to conduct any type of sponsored projects,” Wiecking said.

It sounds like a mundane job for someone who was part of both Gulf wars, a United Nations (U.N.) peacekeeping force and who also served in the Federal Bureau of Investigation (FBI) and National Security Agency (NSA), but Wiecking said it is just where he wants to be right now.

“After 30 years, it’s a great place to be,” Wiecking said. “I’ve got a great boss. I’ve got a great working environment. I get to be home every night. You’re not sitting in the rain or having anybody trying to get out and get you.”

As an artillery officer in the Marine Corps for 21 years, from 1988 to 2008, Wiecking had a variety of experiences both in the field and in a professional military capacity. In addition to serving in a support role in the Gulf wars, he was assigned to the Army as a U.N. peacekeeper.

During almost three years as a peacekeeper, Wiecking served in the Western Sahara, East Timor, Israel and Kuwait.

He also served a one-year fellowship learning about the legislative branch of the government with Sen. Bob Smith of New Hampshire on whose staff he served.

Wiecking said he learned that no matter which side of the aisle the senators were on, they were earnestly trying to do the right thing.

Wiecking grew up in Richmond and Alexandria and attended college at Virginia Military Institute. It was at the end of his Rat (freshman) year when the Marines offered him a scholarship. He said he was interested in joining the Navy but didn’t feel like he could turn down the help with his education.

“And that’s really kind of how I ended up where I was,” he said. “The scholarship offer kind of sealed the deal for me.”

After heading to Quantico out of college for base school, Wiecking went to artillery school in Fort Sill, Oklahoma. His first deploying station was at Camp Lejeune, North Carolina.

His first deployment overseas was in the summer of 1990, which he spent in the Mediterranean Sea. After returning from that deployment, Wiecking was quickly deployed to support the Desert Shield/Desert Storm operations.

He said one of the truths he found while serving in the military is people can do more than they think they can.

After the military, Wiecking went to work for the FBI for 10 years and then with the NSA for a couple years in a military capacity before coming to Farmville.

“My wife’s family was from Buckingham. My family had a small place over in Cartersville, and we just like the Farmville area,” he said. “It was a good place to raise two boys. We got out of northern Virginia and got down to a much more rural, lower key, enjoyable small town.”

He said his family is enjoying this area and doesn’t miss the Washington, D.C., traffic at all.

“This town has everything that you need, not everything you want all the time, but the people are great,” he said. “The environment is great. We fully plan on staying here because it really is a delightful location.”