‘This is what I want to do’ 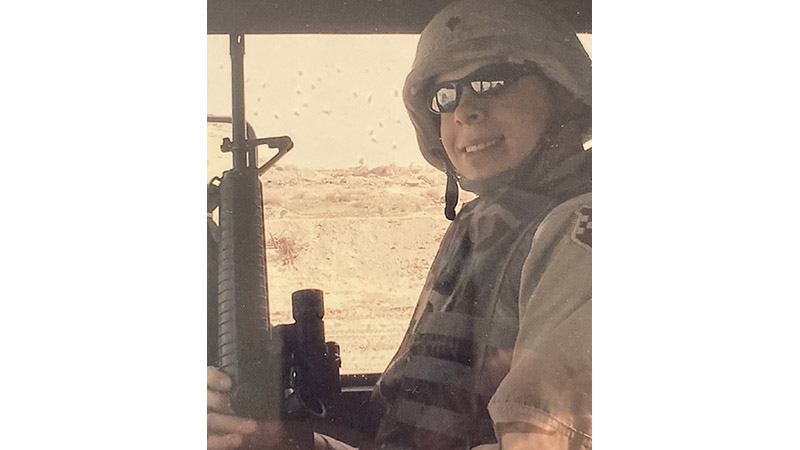 Jones poses for a quick photo while on a convoy in Iraq in 2004.

Sergeant Josh Jones, age 37, of Buckingham, was originally taken on a tour of Fork Union Military Academy as a “scare tactic” by his parents.

Growing up in Chester, Jones was always a smart kid and a good athlete, but his life and education lacked the structure to mold him into the young man he needed to be.

But when his parents told him they’d send him to military academy if he didn’t straighten up, Jones, 14 at the time, took it less as a well-meaning threat and more as an invitation.

Jones found he loved Fork Union and excelled upon entering the academy, so much so that he graduated in 2001 as a company commander and one of the top of his class.

Two years after graduating, Jones was attending engineering school at Virginia Commonwealth University. However, his life was veering off in a difficult direction.

Jones had transitioned from a structured military environment to an environment lacking any structure whatsoever. At the academy, every hour of his day had been planned from sunup to sundown. In college, he found he had far too much freedom. He wasn’t managing his money right, he was falling into the trap of college-age shenanigans, and he knew he had to make a change.

Although he’d lost many of his military habits, Jones had always kept a high and tight haircut. As he was walking through a Walmart parking lot one day, a recruiter spotted him.

“Are you in the military, or do you want to join?” he asked.

Jones’ response was a quick one. “I want to join. I want the first thing you have, and I want to go as soon as possible,” he said.

Seven days later Jones was on a bus and on his way to Fort Jackson, South Carolina for basic training for the U.S. Army Reserves.

A month after basic, Jones was activated in Dec. 2003 to be deployed to Iraq.

It was one heck of a first deployment. At such an early point in the war, Jones was of low rank, but he was excited to serve.

“That’s what you sign up for, to go defend your country and be in harm’s way,” he said.

Jones spent 18 months on his first deployment and was in Iraq at the time of Saddam Hussein’s capture.

But after his first tour, Jones temporarily returned to the U.S. and civilian life without much of a debriefing process. He knew from past experiences that he needed some form of structure in order to keep himself in check and began applying for law enforcement jobs. He took a position as a sheriff’s deputy at the Chesterfield County Sheriff’s Office, where he would hold a job for 10 years.

In the middle of work one day in 2007 an opportunity came up for a chance to head to Iraq once more. The reserves were looking for volunteers to head to the Middle East as part of the second infantry division.

“To put it this way, Iraq was the worst place I ever missed,” he said.

Jones couldn’t speak much to his activities while stationed at the FOB (forward operating base) War Horse during his 13-month deployment. He described his second tour in Iraq as turbulent, including many QRF (quick reactionary force) missions. During that time he and the rest of the division were attacked with chlorine gas, bombs and regular mortar and rocket attacks.

“It was definitely interesting,” he recalled.

It was during Jones’ second tour in Iraq that he fractured his back, an injury that would stay with him for some time. In 2013 he was medically discharged. Although it would be the end of his Army career, it was not the end of his service to his country and the men and women in uniform.

After being discharged, Jones concentrated on starting a family, settling down with his wife and having two beautiful children.

He stayed on with the sheriff’s office until 2015, at which point he had the chance to go back and work at Fork Union for another two years.

But his new calling in life was the result of his membership with the Buckingham VFW Post 8446.

As a member of the VFW, Jones had been attending local meetings for some time. One day a friend came in and informed the group he had encountered a Marine vet who was in need of a vehicle and couldn’t work or support his family without it. The vet was looking for anyone who could help.

This call for help fired up something in Jones.

“Man, this is what I’ve been waiting for,” he told himself.

By the time the meeting was over, Jones had volunteered to take on the task. And before he finished his 12-minute drive home, he’d already lined up a vehicle to be donated and was in contact with some possible sponsors.

The corporation, launched in March of 2020, aims to help veterans and first responders in need of a vehicle.

In his first year of operation, Jones was able to successfully donate three vehicles for nearby veterans in need. He doesn’t plan on stopping there.

In the beginning, Jones was drawing most of the funds out of his own pocket in order to find the vehicles for vets. He said NAPA Auto Parts in Cumberland County was a huge help, donating all parts for free on the first donated vehicle.

Now that Vet to Vet Vehicles has obtained 501(C)(3) nonprofit status, Jones can open the door for other businesses who would like to help sponsor.

Not only does the business help vets and first responders to obtain means of transportation — it also acts as a confidence booster. And Jones won’t just take any vehicle someone wants to donate. Vet to Vet Vehicles fixes up cars and donates them in a condition that makes a veteran proud to drive.

Jones also tries to match the vehicle to the person and their needs, such as a fuel-efficient car for a commuter or an SUV for a veteran with a large family.

Jones learned overseas that when you enter the Army you are putting everyone above yourself. And thanks to the lessons instilled in him throughout his service, he’s still doing just that today.

Above all, he feels passionate about defending his home and supporting his country no matter what. He would absolutely do it all over again if the opportunity arrived.