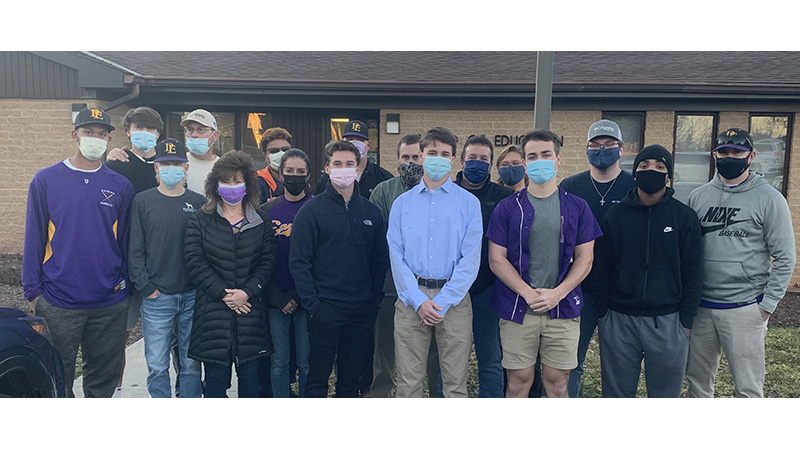 Sixteen people spoke during the public participation portion of the Prince Edward County School Board meeting Wednesday, March 3, advocating for the return of spring sports this year.

The announcement came Tuesday, March 9, that Prince Edward County Public Schools will, indeed, be participating in sports this spring.

The spring sports season was canceled in 2020 due to the COVID-19 pandemic, which is still lingering and was creating uncertainty surrounding a potential 2021 season.

The group of speakers March 3 included student-athletes, parents and coaches. Several of the student-athletes were members of the varsity baseball team, and much of the emphasis was on baseball, but some speakers also made a point to ask the board to bring back all spring sports, which also includes softball, outdoor track and field, soccer and tennis.

The lead-off speaker was student-athlete Mattison “Matt” Kinne, a senior who has been a member of the Prince Edward County High School (PECHS) varsity baseball team throughout his high school career and who also played for the junior varsity team in eighth grade.

Wearing the shirt from his official Eagles baseball uniform, he spoke with passion on behalf of himself and his teammates, many of whom were waiting in the parking lot and the hallway outside the meeting room for their turn to speak.

“If any quality were to define me as a person — and everyone at school would tell you this — I’m a baseball player, through and through,” he said. “Everything in my life revolves around baseball, and for the past year, baseball has been at a standstill for me and my fellow teammates outside in the parking lot.

“The suspension of athletics at Prince Edward County High School has left a negative impact in more ways than many people know,” he continued. “I want to present you with an example of such impacts.”

He noted that when he was a sophomore, he and the Prince Edward varsity baseball squad traveled to Goochland High School to play the No. 1 team in the district.

“This year, because of the cancellation of sports, Nate has since left and gone to Fuqua School to play the same sports that we have canceled — because they are having sports,” he added. “Not only did we lose a great athlete, but I lost a friend at that school that I have been seeing every day for the past 12 years. It’s a sad fact.”

Kinne said the culture of PECHS will be fractured and take tremendous time to regrow if the school system keeps canceling sports.

“The lack of effort put into having a season will be directly reflected by the students of the school,” he said, adding that tryouts, games and practices will be subpar compared to what they used to be.

He stated that academically, there is no doubt that the effort in the current school year has been lower than the average.

“An extremely high number of kids in my grade are failing one or more classes, and there could be many reasons said for such. I credit much of it to the athletic suspension,” he said. “Because of the minimal requirement to play athletics being no longer in place because sports are not happening, students do not feel that it is necessary to perform in school as they normally would. Coming from experience, sports are the driving factor for why we come to school each and every day.”

When the opportunity came for board member comments near the end of the school board meeting, Dr. Lawrence Varner said he supported those who came in support of playing spring sports this year.

“I sincerely hope that we can get something approved for spring sports soon and not wait but announce as soon as possible,” he said.

Prince Edward County Public Schools Superintendent Dr. Barbara Johnson, who praised the baseball team for coming together to advocate for spring sports, indicated the deadline for the decision was in mid-March and that she had been in contact with PECHS Principal Gwendolyn McQuaige-Hicks and PECHS Athletic Director Rodney Kane about the decision.

“We just have to make sure that they’re safe, and I think that at this point in time, we can probably do that,” she said. “We are absolutely going to make that decision sooner than later.”

She said Kane had let her know that most of the other schools in the James River District are planning to participate in spring sports.

When asked if Prince Edward would be going by the Virginia High School League guidance of how to participate in spring sports safely if the division did participate, Johnson said yes.

“But I think that we can also up some of the precautions,” she said. “We can add requirements for our teams.”

Asked if the school system is making this transparent, Johnson said conversations needed to be had with the high school administrative team and that they have been communicating about this topic via email.

“I don’t want to skip steps, respectfully,” she said. “So it’s not the intent not to be transparent, it’s just the intent to be thorough.”