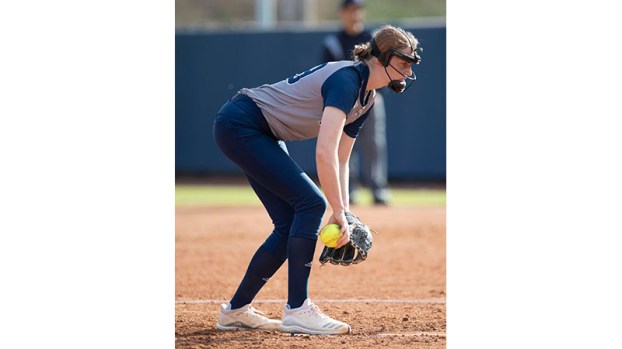 If iron sharpens iron, then Longwood University’s softball team will be anything but dull after the first two weeks of the season.

Concluding a season-opening stretch that has seen them play half of their games against nationally ranked teams, the Lancers (2-8) fell in their third doubleheader of the weekend, 4-1 to host Charlotte and 6-4 to Western Carolina at the First Pitch Classic at the Phillips Complex on Sunday, Feb. 28.

The losses came despite a combined eight strong innings across both games from Longwood senior ace Sydney Backstrom, and 3.1 innings of one-run ball from game-two starter Arleigh Wood.

Backstrom, in her team-leading seventh and eighth appearances of the season, scattered four runs in six innings of a complete-game performance against Charlotte in Sunday’s opener and followed with two hitless frames out of the bullpen in Sunday’s finale against the Catamounts.

However, both the 49ers (8-4) and Catamounts (3-9) got strong pitching performances from their own starters to sink the Lancers on the final day of Charlotte’s First Pitch Classic.

The doubleheader caps what, to this point in the season, has been a grueling start to 2021 for five-time Big South champion Longwood, which has faced three top-25 teams as part of a non-conference contingent that boasts a combined 42-25 record through Sunday.

Among those foes has been No. 16 Duke, No. 16 Georgia and No. 18 South Carolina, all of whom remain in the USA Today/National Fastpitch Coaches Association (NFCA) Coaches Poll Top 25 and one of which — No. 16 Georgia — Longwood upset on opening weekend.

Even as the Lancers left the Gamecock Invitational, where Friday, Feb. 26, and Saturday, Feb. 27, they faced both Duke and South Carolina, Sunday’s trip to the First Pitch Classic still pitted them against a Charlotte team that is off to an 8-4 start and a Western Carolina squad that ranks second in the Southern Conference in ERA.

“Iron sharpens iron, and our goal as a program is to be razor-ready for conference play,” first-year Longwood Head Coach Dr. Megan Brown said. “This weekend was hard in many ways. We have work to do and will be about our work this week.”

On a bitterly cold, rainy night in late February, high school football made its long-awaited return to the Farmville area... read more