Dukes to lead with defense 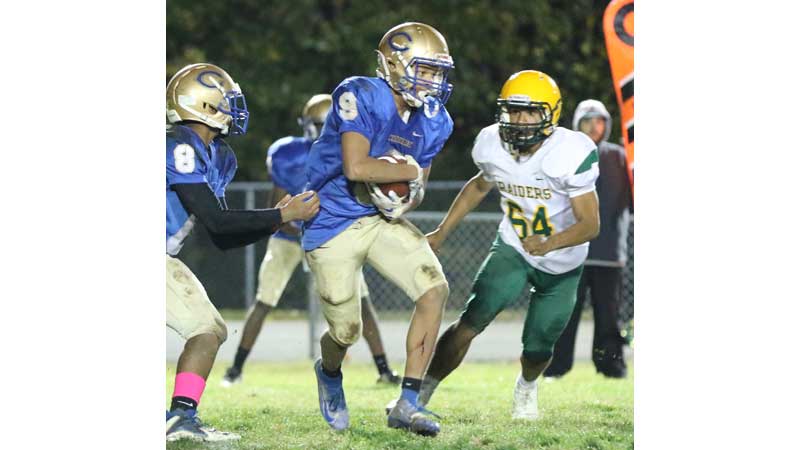 Cumberland County High School’s Kyler Gilliam takes the handoff during a game from the 2019 season. Gilliam, now a junior, will be one of the Dukes’ key running backs this season. (Photo by Titus Mohler)

It was the COVID-19 pandemic that delayed the Dukes’ 2020-21 football season until the spring, and the pandemic has continued to have an impact on the team and its new head coach, Kori Gilliam.

“Under these COVID circumstances it’s tough because you don’t get all of your athletes out, and me just coming in new, not many kids know me,” Gilliam said. “But we’re getting after it, and it’s a tough row to hoe right now.”

He said Friday, March 5, will mark Cumberland’s 12th preseason practice, but despite the lack of prep time, he already has a good sense of the team’s capability.

“They can compete,” he said. “Defensively, they’re scrappy. They like to get after it, so we’re going to hang our hat on defense. Offensively, we should be pretty strong up front with Muzzammil Fulani and a couple other strong kids.”

He said the team is essentially three-deep in the backfield, with senior halfback Vincent Harris Jr. and junior halfbacks Kyler Gilliam and Kai Gilliam expected to receive the bulk of the carries.

“I’m trying to build a front out there,” Coach Gilliam said, also highlighting 6-foot-4-inch, 310-pound senior lineman Jaydon Pompey. “The big thing is in the trenches, to make sure we can compete in the trenches, and then those (halfbacks) can maneuver themselves.”

The players getting snaps at quarterback include senior Javon Marion and sophomore Cole Dalton.

Marion was a notable standout for the Cumberland varsity boys basketball team, and Gilliam said his combination of athleticism and intelligence will bring another dimension to the offense.

As of Tuesday, March 2, the Dukes had five games on the schedule, with the possibility of a sixth being added.

The Virginia High School League will be holding a postseason this spring, giving Cumberland even more to play for.