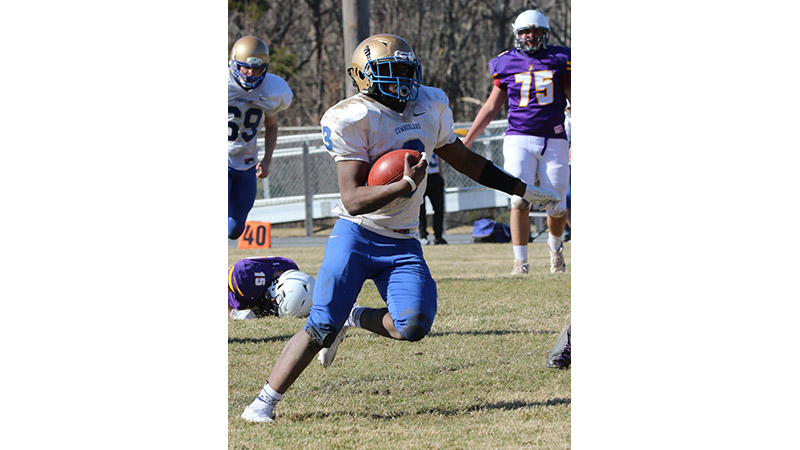 The Cumberland County High School varsity football team lost decisively to host Central Lunenburg High School, 48-12, in the season opener for both teams Saturday, March 6, but the Dukes showed their new head coach something the scoreboard could not convey.

Playing with what appeared to be less than half of the approximately 40 available players the Chargers had on hand, Cumberland had a significant number of players who needed to play on both offense and defense throughout the game.

“I cannot be more proud of them,” Dukes Head Coach Kori Gilliam said of his players. “(They) fought the whole game both ways — ironmen.”

As they put forward a remarkable effort without complaints, he said he has not seen something like it in many, many years.

Both teams had two weeks of practice or less entering the game due to winter weather.

Gilliam said the Dukes had 10 practices total but only two full-team practices, and the squad also had lost five players prior to Saturday’s opener who likely would have been starters. Among the reasons for the departures were COVID-19 concerns on the part of parents.

Despite the difficulties, Cumberland still made some positive strides on the gridiron Saturday, with senior halfback/linebacker Vincent Harris Jr. leading the way.

“I feel like the running game is where we’re going to hang our hat,” Gilliam said. “Vince really impressed me today.”

Harris ran for 86 yards and also returned a kickoff for a touchdown early in the second half.

The only negative Harris pointed to after the game was that he cramped up a little bit during the contest.

“I think I let my team down with that, but other than that, I think I played pretty hard today,” he said.

He praised the players who paved the way for his rushing yards.

“The line played pretty good today,” he said. “With what we’ve had previous years, they came out and played really hard.”

Coach Gilliam also made a special point to highlight the five members of the offensive line, saying they are probably the staple of the offense right now, which he said is a great way to start for any football team.

“My o-line is probably going to get the game ball,” he said. “They kept (sophomore quarterback) Cole (Dalton) pretty clean, gave him time in the pocket and opened up holes for the backs. So I’m thoroughly impressed and proud of that front five.”

“It’s the best o-line we’ve had in about two years,” Fant said.

The Dukes’ first touchdown came in the first half via an 11-yard reception by freshman tight end Anthony Price.

In his postgame comments, Harris also shared praise for Pompey on defense.

“I think Jaydon Pompey was really working his tail off today, causing penetration, getting in the backfield, making good plays, making it easier for the linebackers to scrape over and make tackles as well,” Harris said.