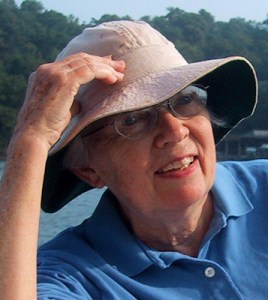 Dorothy Elizabeth “Dail” Porterfield died peacefully on March 14, in her home of over 50 years at the campus of Hampden-Sydney College in Virginia, where she had managed the stockroom for hundreds of chemistry students.

Dorothy was born on Jan. 20, 1935, in Goldsboro, North Carolina to Roland and Elizabeth Dail. She grew up in Goldsboro, as attested by the class picture of her second-grade classroom at Walnut Street School with other seven-year-olds who became lifelong friends.

She graduated from Goldsboro High School in 1953, by which time the Porterfield family had moved in across the street. Bill Porterfield, also in the class of ’53, had taken notice; he kept her graduation picture in his billfold for 68 years. He was going to UNC, but in those days she couldn’t. She could, however, go to “WC”, the women’s college of UNC in Greensboro and transfer to Chapel Hill as a junior – and so they finished college together as they did everything else for seven decades.

The honeymoon was a trip across the country on two-lane roads to Pasadena, where he would start graduate school and she would start a career in medical technology at a hospital lab. When they returned to Chapel Hill to continue his doctoral studies in chemistry, she went to work in one of the biomedical research labs in the UNC medical school, but also had their first son Allan.

When he finished in 1962 they moved to Cumberland, Maryland, where their second son Douglas arrived; but in only two years the young family moved to Hampden-Sydney, where the boys grew up and she resumed her medical lab career at Southside Virginia Community Hospital. Bill was on the chemistry faculty at the college, however, and when the chemistry stockroom manager retired he talked her into taking that job, where she stayed till she retired, making friends with many students.

Shortly after she retired, she and Bill bought a second home on Smith Mountain Lake, where she was happiest on her sailboat but would condescend to ride on their bow-rider motorboat; they owned the house for almost 20 years and loved the experience. Eventually it became too difficult to keep up two homes, and they settled back into their Hampden-Sydney home. They took several tours and cruises, and the pictures of these tours, their family as it grew up, and their life were cycling on a digital picture frame in front of her as she passed away.

A private family service will be held later in the spring. Anyone wishing to commemorate her should donate to College Church (PO Box 13, Hampden-Sydney, VA 23943) or to their own meaningful charities. Puckett Funeral Home is serving the family. www.puckettfh.com.