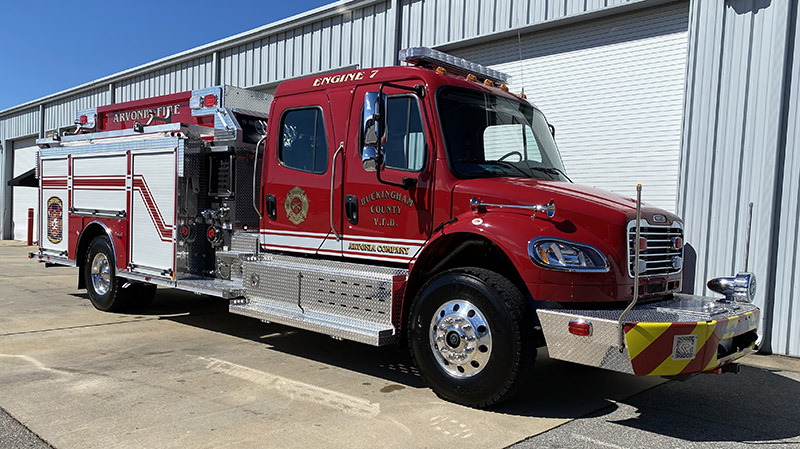 Pictured is Engine 7, a brand new 2021 Rosenbauer dual cab fire truck recently obtained by the Arvonia Volunteer Fire Department. The truck is slated to hit the streets sometime this week.

Arvonia residents may notice a shiny, new firetruck making its way down the road in the near future.

The vibrantly red pumper, Engine 7, is the newest piece of equipment added to the station of the Arvonia Volunteer Fire Department (AVFD) in Buckingham County. The firetruck was delivered last week and is nearly ready for action.

According to AVFD President Steve Toney, the truck, a 2021 Rosenbauer dual cab engine, was purchased for approximately $355,000 to replace the department’s previous engine which will soon be retired and likely sold.

The Rosenbauer will include many features which did not exist in the previous truck, including a dual cab that allows for five firefighters in the truck at any time and will make donning oxygen tanks and other gear easy while on the way to an emergency. The truck will have tools and equipment to respond to both structure fires and vehicle accidents and is customized to fit the department’s specific needs.

While AVFD is still adding on tools and putting the final touches on the firetruck, Toney added Engine 7 should be ready sometime this week. He added the department hopes the engine will remain in use for 20 years.

He also hopes the fire department will be able to have a community day in the spring in which residents can come and look at what their donations helped fund.