Young: Ever ready to serve 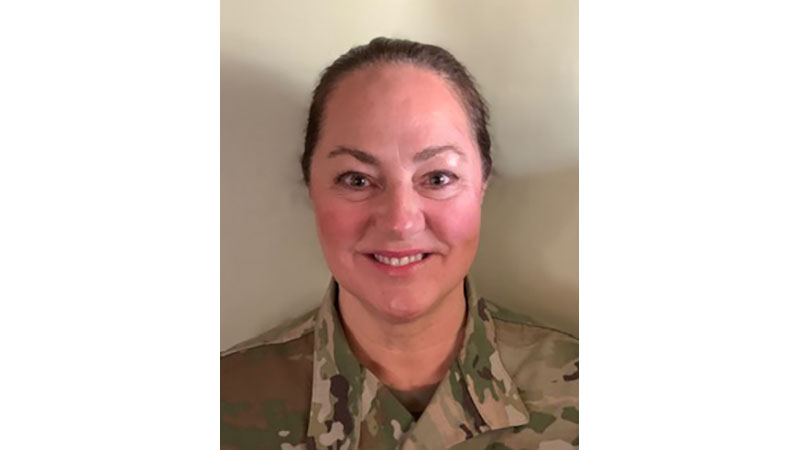 Justine Young, of Farmville, is an active reservist in the U.S. Army, needing to be ready to leave on any given day if orders come in or if she is deployed. She serves as a nurse.

Justine Young leads an exciting, unpredictable life that many would find nearly impossible to manage, but she makes it work and has willingly embraced it in service to her country and her fellow Americans.

Many people in the community know her as the executive director of Piedmont Senior Resources Area Agency on Aging Inc. (PSR), based out of Farmville.

But at age 57, she is also an active reservist in the U.S. Army, serving as a nurse in the 7457th Medical Battalion, now known as a Mobile Outbreak Response Unit.

It is being an active reservist that brings a significant amount of unpredictability to her life. It means she could be issued orders or deployed at any time.

This part of her life took center stage last spring. She received a call from her Army unit one morning, and she was asked to come in to help give an idea of who was available for a potential deployment to help treat patients amid the COVID-19 pandemic.

That was a Sunday afternoon.

“I left work on Friday afternoon, walked out of my office expecting to be back Monday morning,” she said. “I have animals, I have stuff and a job and whatever, and suddenly everything turns on its head, and it’s different from being full time where you are full-time Army.

“I’m not,” she continued. “I have another job, and I have to rearrange my entire life because now suddenly I’m being deployed.”

She wasn’t complaining, though. She was simply explaining how abrupt the changes to her daily life can be and how part of her service is to be ever ready for those changes.

“Thank God I had prepared and gotten ready a whole lot and was able to do it fairly easily, although it was still incredibly stressful,” she said.

She had to have somebody trained to step into the executive director role at PSR.

“I have to have everything set up so if I walk away, everything continues to operate for however long I’m gone,” she said. “And let me just say my (PSR) board has been outstanding about any of my military activities — 100% supportive and behind me.”

Another part of her service is to accept uncertainty surrounding the duration and location of a given assignment.

But she has served readily, faithfully and effectively amid circumstances like these for about 15 years now.

“Direct commission means I didn’t go to the lengthy (military) schools or do all that,” she said. “Basically it’s a direct commission from the president that makes you an officer based on your background, education. So I walked in as a second lieutenant.”

Allowing for the direct commission was the fact that she had three degrees — nursing and political science degrees and a master’s in business.

With her entrance into the Army, Young had successfully achieved something that had been a personal goal years prior.

She remembered seeing this covered on the news one morning as her teenage daughter was getting ready to go to school.

“I thought, ‘Well, I need to do my part,’ and I thought it would be interesting, and I thought it would help,” Young said. “And as a nurse, it wasn’t as much risk as other positions, although it can be risky. I knew people that got killed, medical people. One of them, (a rocket-propelled grenade) came in and blew her up on the base the day before she was supposed to leave.”

Nevertheless, around 1999 or 2000 Young saw a recruiter to join up, but she was denied.

“They wanted an X-ray on my foot and ankle because I had crushed them in a car wreck many years before,” she said. “They ended up denying me because of that, because my foot and ankle were too messed up, they said, to take the responsibility for it.”

Then in 2007, she ran into the same recruiter at a job recruitment fair.

“I was recruiting for the business I worked for,” Young said.

The recruiter started asking her about joining the Army.

“I said, ‘No, you already wasted enough time, I’m not doing this again,’” she said. “He’s like, ‘No, no, no, we can get a waiver this time, because by now we’ve ramped up to even bigger wars and more stuff,’ and the strain on the medical part of the Army was tremendous, and they didn’t have enough people.”

She said he kept after her, and finally she agreed.

“Well, sure enough, they did get a waiver this time,” Young said, and thus began her 20-year term.

She recalled a couple of those experiences, including one that occurred in a part of Hawaii that took her by surprise.

“It was like a third-world country, and I’ve been in those, so I know what they’re like,” she said. “So we provided dental and medical to civilians there. We went to these schools, elementary schools, and screened students for vision problems, other health problems. There’s just real lack of health care. Our dentists provided all kinds of dental work, some major dental work. So there are things like that that we do.”

Some of her experiences have been harrowing, like the 2020 deployment that ended up lasting for a little more than a month.

Young and her unit assisted civilian hospitals that were overwhelmed with COVID-19 patients.

“The staff were dying, and that was before everybody knew how to treat COVID, before everybody understood totally the transmission, so it was just so many staff got sick, some of our unit got sick,” she said. “It was really scary. I’ll tell you, I was scared.”

Preparation for situations like these are what constitute much of Young’s service as an active reservist.

When she is not on an actual assignment via orders or deployment, she has a weekly online routine.

“Every week, I log on to check my messages from the unit, to get instructions on what I need to do and to be prepared,” she said. “There’s always trainings coming up that are required, and you’ve got to check every week. You’ve got to check and see if you’ve gotten orders every week. Hopefully they’ll call you, but sometimes it’s an email with directives on what to do, or sometimes they’ll put up an email and say, ‘Does anybody want to volunteer for this mission?’ And you can volunteer to go somewhere or be deployed somewhere.”

She said being in the Army gives her an additional goal that she has to achieve routinely because her unit meets every month.

“There’s trainings that have to be done every month before we meet, because since we are not full time, we’ve got to get all this stuff done after work and on the weekends,” she said.

And then her unit will meet on the weekends, and sometimes training will take her out of town for a week or a month.

Evaluating how her military experience has aided her in life, Young said it has helped her stay in good physical condition since she must take a physical training test every six months that gets harder and harder as she gets older. With all the mental training, the Army also regularly satisfies her desire to learn.

Additionally, the military offers her the aforementioned experiences and travel while legally guaranteeing she will have the same job or an equivalent one to return to at the end of assignments.

Though perspectives on America fluctuate wildly these days, Young said she is proud of her service and answered with a “resounding yes” when asked the question, “If you had the opportunity to go back in time and join the military all over again, would you do it?”

“Only I would not have waited till I was 42,” she said with a laugh. “I would have done it earlier so I could have retired earlier. Like I said, it’s getting tough.”

Later on Jan. 28, the day Young gave the interview for this story, she was notified by the Army to prepare for a vaccination deployment in the future.