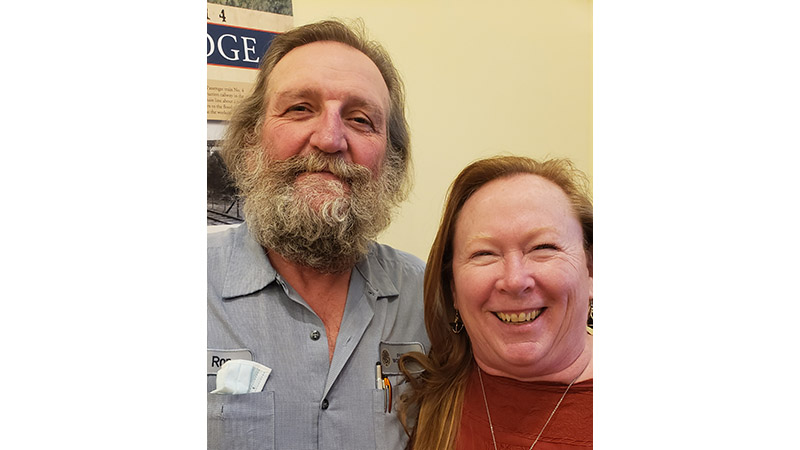 Ron and Magi Van Eps have served Prince Edward County for the past 13 and 14 years, respectively, and will be retiring Friday, Feb. 5.

Though Prince Edward County Administrator Doug Stanley has only been on the job since Nov. 16, he has already developed a strong sense of what the Van Eps mean to the county.

“(They are) two very, very dedicated individuals who have given their heart and soul to the community over their tenure,” he said. “So we’re really going to miss Ron and Magi.”

Magi has worked for Prince Edward for more than 14 years, getting her start in September 2006. Ron’s start came in October 2007, giving him a little more than 13 years on the job.

“You’ve heard people say that they were privileged and honored to be allowed to serve in some organization,” Magi said. “I say that every day here, because it’s heartfelt. That is what has made this decision to retire so very difficult. I want to go, and I want to stay.

“But, we missed out on the first round of grandchildren because we were still in our 40s and 50s — the youngest one of those is now 17,” she continued. “Now the second round is still in preschool and younger, and we have our first great-grandchild too. We don’t want to miss out on being part of their lives too.”

Ron said he and Magi have been talking about when and how they would retire for the last 18 months or so.

“We discussed how our grown children all seem to be moving into the same geographic area — Texas — and decided that now was the right time,” he said. “So, we’re off to Texas for our next adventure.”

However, they will leave lasting fingerprints on a county where they have been thoroughly involved.

“I started out as the marketing assistant in economic development, but then the Board of Supervisors determined that tourism was big enough to be a standalone department, so I was promoted to Tourism Coordinator in late 2008, I think,” Magi said. “As marketing and customer service have been my background in the private sector, my focus here has been to seek ways to bring visitors to the Farmville/Prince Edward community so we can ‘take a walk in their wallets.’”

She noted she has played many roles over the years, being involved in every major event hosted by Prince Edward County, from the Jamestown Celebration in 2007 to the many monuments and the Light of Reconciliation.

“My job also enabled me to work as a partner with both the Town of Farmville, since 2006 in tourism, to Virginia’s Crossroads, the third-oldest regional tourism marketing consortium in Virginia — first as the marketing chair, then the organization’s chair,” she said. “The goal in all cases has been the same — find creative ways to get locals and visitors alike to see this hidden gem we all call home as the amazing place it’s always looked like to me.”

Ron started with the county as its building and grounds supervisor and then was promoted to director of public works when the county took over operating the landfill.

“Duties over the years include plumber, painter, carpenter, electrician, computer tech, licensed landfill operator, truck driver, equipment operator,” he said. “There isn’t a corner of this county that I don’t know like the back of my hand. I’m proud that we have accomplished so much in my time here and that we’ve done the vast majority of the work with in-house staff, saving the taxpayers a great deal of money over the years.”

Magi said that right now, her personal highlights from her time working with the county are split between the successful expansion of the Civil Rights in Education Heritage Trail throughout the Virginia’s Crossroads region and the WanderLOVE — #FindWhatYouLoveInFarmville campaign that will run for the next year after she has left.

Ron said he thinks the most significant achievement he was a part of was when the county decided to renovate the front of the courthouse and the cupola in preparation for the Light of Reconciliation.

“That was a very large project, and we completed 90% of the work in house,” he said.

He noted that public works director has been a most challenging position, and while he gave a lot, he also learned a lot there too.

Magi said this is a difficult position to leave behind.

“I can say that without reservation, this is absolutely the best job I have ever had,” she said. “I tell people that I ‘get’ to come to work every day looking for ways to inspire locals and visitors alike to find what they love In Farmville, and I get paid too. I fell in love with this community on the first day, and it’s so very difficult to say goodbye to everyone here.”

Emert has 60 days to comply