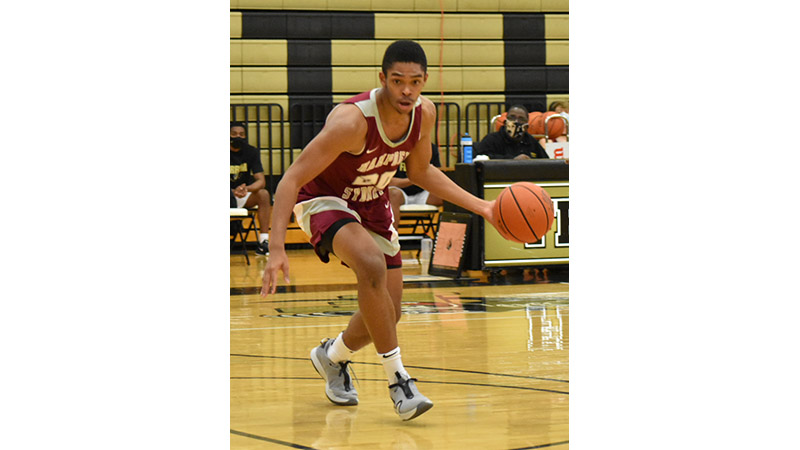 Sophomore Ryan Clements added 14 points off the bench, and senior captain Jake Hahn had a double-double with 13 points and 11 rebounds for the visiting Tigers (1- 4, 1-3 ODAC).

“Always big when you can win one on the road in the ODAC,” second-year H-SC Head Coach Caleb Kimbrough said. “We had great enthusiasm today. Proud of the guys.”

The Tigers, however, began battling back with six unanswered points to get to within 19-16 at 11:01 after a layup by Hahn, and the visitors took their first lead at 24-22 with 7:04 remaining in the first half following two free throws from Hahn.

H-SC continued its momentum, closing the first half on a 29-13 run over the final 12:38 to lead 39-32 at the intermission. Hahn led the effort with 10 first-half points, while freshman D.J. Wright had nine points off the bench, and both Hardy and Clements contributed eight first-half points.

The Tigers began the second half right where they left off and extended their lead to 47-34 at 16:49 after a layup by junior Jack Wyatt. The visitors led 51-39 at 14:29 following a jumper in the lane from Wyatt.

E&H responded with eight unanswered points to close to within 51-47 with 12:24 remaining, but H-SC used a quick 8-1 run to lead 59-48 at 9:11 after an offensive rebound and layup by Hahn. The Wasps were within 59-52 with 7:56 left, but the Garnet & Grey scored seven straight points to lead 66-52 at 4:48 — getting four quick points from Clements, including a steal and slam dunk, along with a basket from Hardy and a free throw by Hahn.

The Tigers took their largest lead of the contest at 74-57 with 1:18 remaining after a layup by freshman Adam Brazil en route to the final margin of victory.

Holliday Jr. grabbed seven rebounds to go with his 15 points. Micah Banks added 13 points and a game-high three steals for the Wasps.

After a trio of canceled games this week, the Tigers are set to resume competition Tuesday, Feb. 16, at 7 p.m. against visiting University of Lynchburg.