Life of a lineman 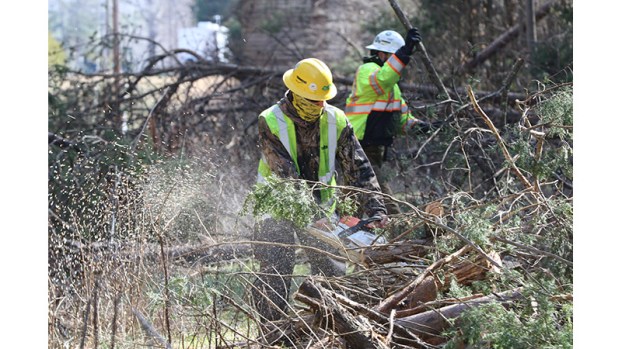 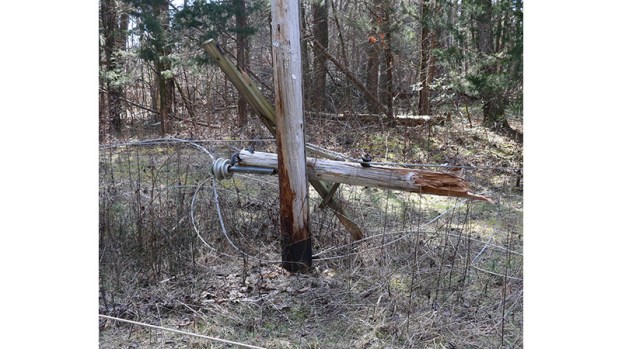 The crossarm and the top of this pole in Darlington Heights broke off as a result of the recent winter storm. The lines pictured are de-energized, giving restoration crews a safe working environment. (Photo by Titus Mohler) 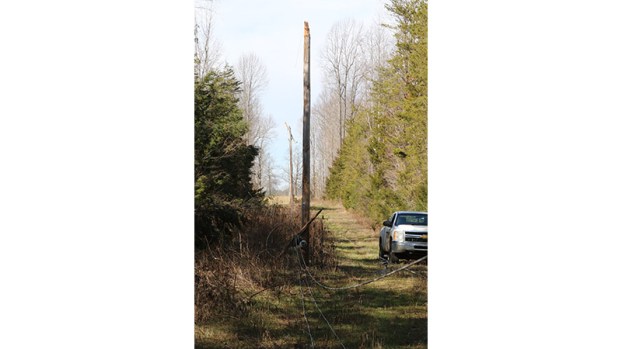 These power poles and line in Darlington Heights were damaged as a result of last weekend’s winter storm. Tree crews are clearing this area so the de-energized lines visible and the poles can be repaired and power restored. (Photo by Titus Mohler) 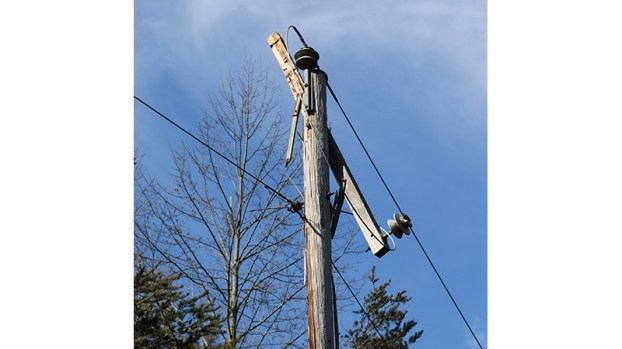 Compelling, impactful adjectives seem like the only ones that will do justice right now in describing the lives of powerline workers and tree crews aiming to bring power back to area residents in the wake of a historic storm.

Southside Electric Cooperative (SEC) Serviceman Ben Simmons listened to those terms, laughed and said, “All of the above.”

Jennifer Wall, communications specialist with SEC, put the nature of the winter storm that hit the area this past weekend into historical context, giving an idea of what Simmons and his colleagues are facing.

“The last time anyone saw a storm of this magnitude was over 20 years ago,” she said. “For Southside Electric Cooperative to have had at one point 48,000 members without power, that’s substantial, and the reason why the number is so large is because this is rural America.”

An SEC press release noted the organization strategically pre-staged significant amounts of materials and personnel in order to be best prepared to restore power to the members in its 18-county service area. In advance of the freezing weather, 18 mutual-aid crews, 10 contract crews and eight contract tree crews were brought on board, as well as 26 of its own restoration crews. Subsequently, on Monday, Feb. 15, an additional 10 contract crews arrived, with 10 more scheduled to arrive by Thursday, Feb. 18.

“Even with our extensive preparations, this monumental storm dealt a significant blow with up to 3/4 inches of freezing rain forming on trees and power lines,” SEC Operations Vice President Brad Furr said. “One issue that our crews continue to face is impassable secondary roads due to downed trees. Crews are clearing the trees with chainsaws to be able to get access to the seriously damaged infrastructure in order to restore power for our members.”

The release stated that as of Wednesday morning, Feb. 17, there were still 844 outages affecting nearly 26,000 members in SEC’s service area.

Crews have been going about the work of storm restoration, but they have been doing it in the face of setbacks both current and imminent. Currently, trees continue to fall down, leading to more damaged power lines. Another winter storm was set to hit the area with more ice Thursday.

But there to face the chaos and stress are workers like Simmons. His days lately have started before dawn.

“By the time we go in and get material and everything, shoot, sometimes it’s 10, 11 o’clock, sometimes midnight when you get home,” he said.

These temporal reference markers help explain how much sleep he is getting these days — not much.

He does manage to find time to eat during his busy day, but this is not always a certainty.

“I eat some in between jobs, mostly it’s all on the run — if you can find something,” he said.

“Most all your little country stores out here, they don’t have power,” he said.

The number of restoration jobs Simmons and linemen work each day can depend significantly on their situation.

“It could be, oh my goodness… you could do 25 to 50, or when you’ve got huge jobs like this (in Darlington Heights), oh man, this right here is a full-day job by itself,” he said.

Jobs for linemen essentially include restoring power lines, but they may not be limited to that.

“To get to (the line), that’s part of the job too,” SEC Utility Forester Sarah Elyard said.

She explained that not every line crew has a corresponding tree crew to clear the way ahead of them. This means that for some linemen, their repair work is preceded by sometimes two hours of cutting and pushing trees aside.

In June, Simmons will have been with SEC for 15 years. He explained what drives and motivates him during the long 16-hour days.

“Right now, (with) six-tenths of an inch coming tomorrow, ain’t much driving anything right now,” he said with a laugh, “but I would say mainly once you get into this work, after a while, it’s in your blood because you love seeing people that are happy and things like that.”

Though power is out at his home in Burkeville, he indicated that his priority is helping others get their power back.

“I won’t have power for a while, but I’m out here trying to get the rest of them on, so it’s just, yeah, I love seeing happy people, and right now there’s a whole bunch of them that aren’t happy,” he said.

So his work continues.