‘I knew what I was doing, and I’d do it all again’ 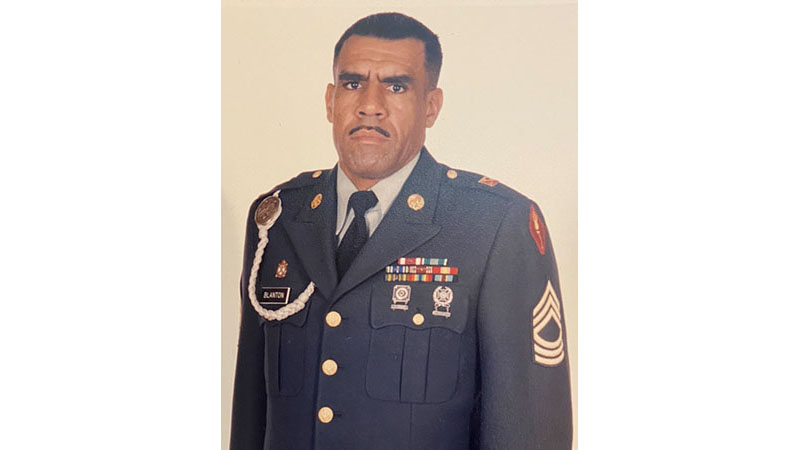 Silas Blanton has been able to enjoy two careers in his life — 20 years of service with the U.S. Army and another 20 years working at the local Piedmont Regional Jail.

Prince Edward County resident Silas Blanton was born in the nearby Cumberland County in 1959.

Growing up, he attended Luther P. Jackson High School and lived through the integration of Cumberland County Public Schools, graduating from Cumberland High School in 1974.

As a young man, Blanton would often witness the activities of soldiers from the Army National Guard who came up to train in the wooded area behind his childhood home on Raines Tavern Road.

Blanton admired the young men’s discipline and work ethic and knew at a young age that he wanted to do one of two things — work with big trucks or join the Army.

Coincidentally, his career would incorporate both.

At 20 years old, Blanton signed up for the U.S. Army, entering basic training in September of 1975 at Fort Knox, Kentucky.

After two months at Fort Knox, he was then sent to Aberdeen Proving Ground in Maryland for advanced individual training. It was there that he picked up a skill that would define his 20-year military career.

It was in Aberdeen that Blanton decided he wanted to be an Army mechanic. For three months he trained there, all while learning how to work on wheel and tracked vehicles, including tanks.

Afterward, Blanton was assigned duty at Fort Hood, Texas. For a former small-town country boy, the sheer size of Texas was overwhelming, but he grew to admire the place and the friends he made while there.

After Texas, Blanton headed for his first tour in Korea, spending a year as a wheel vehicle mechanic before being assigned to Fort Riley, Kansas, as an auto repairman.

Blanton returned for a second tour as an auto inspector in Korea, spending his time at Camp Casey located by the demilitarized zone.

Later, he returned to Aberdeen as a noncommissioned officer (NCO) at the school training brigade where he taught other soldiers his military occupational specialty. There, he served as a senior instructor from 1982-1984, training young soldiers coming in for advanced individual training.

Blanton then headed to Germany as a motor sergeant where he was in charge of his unit’s entire motor pool, including automotive equipment for wheel and tracked vehicles. He particularly enjoyed his tours in Germany, where he encountered a beautiful landscape and kind people.

After three years in Germany, Blanton returned to Aberdeen for his most prestigious job as a senior leader trainer in the NCO Academy. From 1987 to 1991, he spent his time training senior NCOs and preparing them for the next step of their career, whether it be a promotion, assignment overseas, training for combat zones, etc. Quite a few of Blanton’s soldiers went from Aberdeen to Desert Storm.

Blanton was again sent to Germany to the 21st Theater Army Area Command (TAACOM) where he was responsible for all of the support and logistics there and in the surrounding area. After again returning to Aberdeen in 1996, it was finally time to retire after 20 years of military service. Blanton ended his Army career having reached the rank of master sergeant.

Although he was retiring from the Army, Blanton’s life did not slow down. He settled into Prince Edward County, got married and had three children — one son and identical twin girls.

As he was only 40 by the end of his military career, he opted for a second career, one which also spanned 20 years in length, with the local Piedmont Regional Jail (PRJ). At PRJ, Blanton also climbed the ranks from basic officer all the way to captain before retiring in 2017.

When asked about some of the difficulties of his military service, Blanton remarked that he witnessed and experienced inequality that existed within the force, adding discrimination was prevalent in many aspects of the branch, from promotions to assignments and school. Although all duty stations were different, a young man, especially a young Black man, really had to prove himself.

In fact, Blanton encountered other soldiers, including a friend he kept up with for years, who had never encountered a Black person before meeting Blanton during basic training.

Blanton states he is a devout follower of the U.S. Constitution and from day one raised his hand and vowed to defend it against all enemies, foreign and domestic. He said he was heartbroken by the activities seen in at the U.S. Capitol on Jan. 6, when he said he witnessed a domestic attack on the Constitution, one he would have gladly fought against had the call come in.

“If they called me today, I would go,” he remarked.

Blanton believes the U.S. is the greatest country in the world, one that stands for freedom. He describes himself as a born again Christian, a born again soldier and a soldier of Christ. That is evident in a jacket that he owns which displays a slogan he can strongly relate to, “I wanted to serve, I volunteered to serve, I knew what I was doing, and I’d do it all again.”