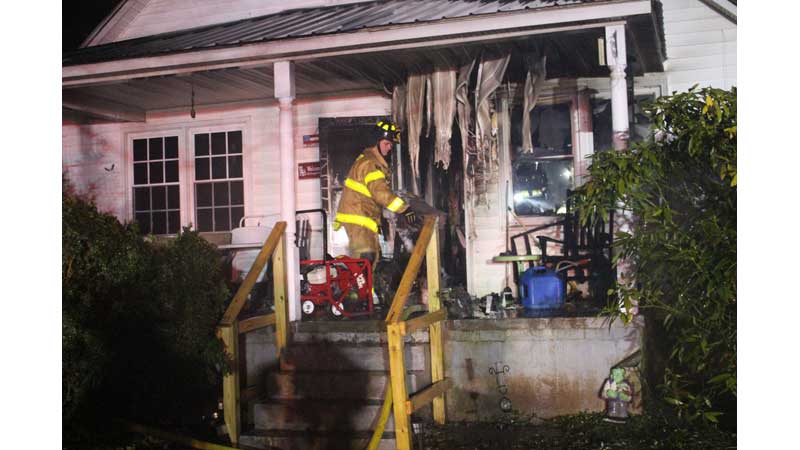 Firefighters respond to a house fire on Back Hampden Sydney Road in Farmville Monday night, Feb. 15. The house is fixable, but a family of two has been temporarily displaced. The house did not have power at the time of the fire. (Photo by Dan Pempel)

A house fire on Monday evening, Feb. 15, in Farmville displaced a family of two, but firefighters saved the structure.

L.W. Gilliam, fire chief with Hampden-Sydney Volunteer Fire and Rescue, said his department was dispatched at 9:10 p.m. for a possible structure fire at 5598 Back Hampden Sydney Road. The crew arrived to find a story-and-a-half structure fire showing on the front side of the house.

“Crews made a quick knockdown on it,” he said, later noting they had it under control in less than 10 minutes. “They saved the structure. The house is fixable.”

He said the family was relocated Monday with the Red Cross. The family included a husband and wife. They were not injured.

“They had left and went to town to get something to eat and come back, and they found the fire,” Gilliam said. “So the cause of the fire is still undetermined.”

Gilliam confirmed the house did not have power at the time of the fire.

He said the cause of the fire is being investigated.