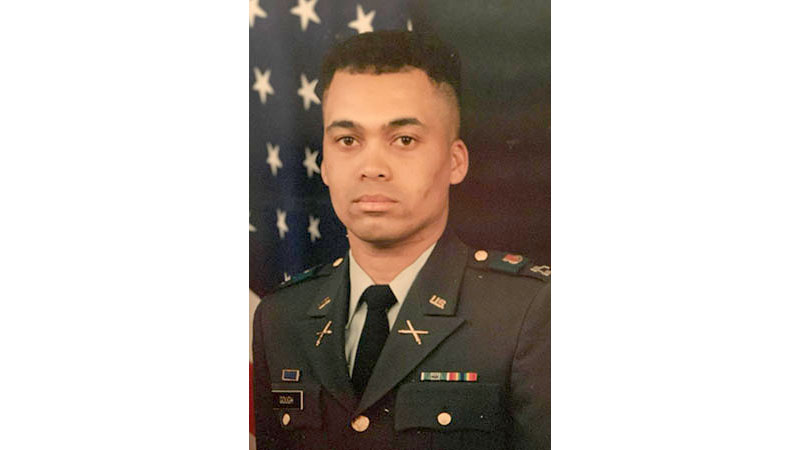 William “Buck” Gough Jr. served in the U.S. Army, ultimately earning the rank of captain while on active duty. He was promoted to major in the Individual Ready Reserve.

William “Buck” Gough Jr. joined the U.S. Army in 1984 and served into the early ’90s, including during the first Gulf War.

While Gough did not directly participate in any active combat situations, as a captain, he had the responsibility of sending soldiers into them.

On average, Gough had 95 to 96 soldiers under his command while serving in Germany.

Born and raised in Buckingham County, Gough recalled that it was important facets from his childhood that led to him ultimately joining the military. For example, his father, William Gough Sr., served in the Army.

“I used to hear some of his stories and looked at his photograph, and I said, ‘I think I can do that,’” Gough said.

“I think playing for Russ’ dad gave me inspiration to go on and do some things that I didn’t think I could do,” Gough said.

It all came together for Gough when he went to Saint Paul’s College in Lawrenceville, where he played collegiate baseball.

“I got to play against the great Longwood Lancers and Coach Buddy Bolding,” he said. “And during that time, I thought about something that I could do to make it a little more interesting and be assured of a job and have a sense of service at the same time, as my dad served as an enlisted soldier when he was younger.”

Gough said one thing led to another, and he took the first class of Reserve Officers’ Training Corps (ROTC) and started liking it.

Briefly chronicling his key experiences while in the Army, Gough said he started out as a fire support officer, which was a second lieutenant forward observer, spotting artillery rounds for the infantry.

“Then I moved on to be a service battery (executive officer), nuclear weapons carrier officer, when I was stationed at Fort Knox,” he said.

After serving in Kentucky, he went to Germany.

“When I got there, I was an S4, the logistics officer,” he said. “From there I went to Fort Leavenworth, went to commanding the Cass Cube course there.”

He left Fort Leavenworth and Kansas to return to Germany, taking command of a headquarters battery and staying in that position for about 22 months.

Gough said he was stationed in Germany throughout the course of the first Gulf War.

“I was on an eight-inch howitzer, but no one was really jumping up and down for my unit — other than my colonel — to go to war,” he said.

After this, near the conclusion of his military career, he returned to the states.

“I went to Tennessee Tech, and I taught ROTC for a year,” he said.

Gough recalled that before the Gulf War started, the Army was close to a drawdown — a lot of soldiers were close to being discharged.

“A lot of our soldiers were at the point where they could get out,” he said, but then the war came, and the expiration of their term of service (ETS) was pushed back. “They froze everyone, so I had sergeants that were getting ready to ETS that had been in Vietnam that were stopped within a couple of days of finalizing their career and sent to the Gulf War.”

He noted that after that war and after he had returned to the U.S., he was in another time period when they had a drawdown of the Army, a voluntary separation incentive.

“You had to make the next rank, and that was something that was not assured,” he said. “So I took that chance and said, ‘Let me find another career.’ So 29 years later, I’m here at the Buckingham Middle School.”

He teaches life science, and June 2021 will mark his 29th year as a teacher.

During the past three decades, he also had the opportunity to collaborate again with Pete Gowin.

“After playing for him, I ended up coaching with him — had that pleasure for many years when I came back here,” Gough said.

Gough said his military experience helped him in his post-military life, teaching him to take a step back and to be realistic about everything that goes on around him.

“It really gave me a sense of pride and (ability) to focus,” he said.

He has been able to pass on to his students some of the lessons he learned from his experiences as he shares stories with them.

“The military stuff, the kids get a kick out of it when I talk about it some,” he said. “Some of them, they think that that’s the only thing that I taught them.”

When asked if serving the country in the military was still a point of pride for him today, he had a quick reply.

Having served during a war, Gough recalled a positive reaction from Americans to troops returning home.

“It was a sense of pride,” he said. “It was all pride that the guys went there on a mission, and they had a great sense of pride about what they were doing, and you couldn’t have asked for anything better for the receptions that were held for the troops when they came home. So it was a lot different from what I had heard about from the Vietnam era.”

Some soldiers, from any era, return home with injuries to varying degrees that were accrued during their service. Gough was no exception to this.

“For a long time, I was in great shape, and then I started to break down some,” he said. “Running was not a problem, and then I had a Humvee accident during my command time, and that caused some trauma that showed up later and would cause a back surgery to correct some discs. And then I had a knee replacement in July of this year — so wear and tear on the joints, so that’s some of it.”

It is clear that overall, though, Gough thinks fondly of his time in the Army.

“I guess if there’s anything that I’ve missed, it is the time with troops and the command time,” he said. “It was a great time.”

While on active duty, his highest rank was captain, and then he was promoted to major in the Individual Ready Reserve.

And if he went back in time, would he join up again?

“I’d be right there,” he said. “If I weren’t in a Humvee accident and a few other things that have happened, I’d go right back. The physical things were holding me down, but yep, I’d go back.”