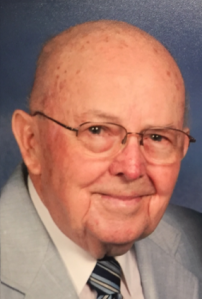 Born in Bertie County, North Carolina, on Aug.24, 1925, he was a son of the late Eunice Earl Brown and Ernest Cleveland Lee, Sr.

After graduating from Mars Hill School, Earl served in the U. S. Coast Guard during World War II. He was in the first graduating class of the School of Business Administration of the University of Richmond in 1950. Earl’s career in hospital and nursing home administration led him to health care institutions across Virginia. He became Administrator of the Holly Manor Nursing Home in Farmville in 1972 where he served until his retirement.

The family wishes to express sincere gratitude to the staffs of Lakewood, Henrico

Doctors Hospital-Forest and Heartland Hospice Care for the care and kindness given to Earl.

In lieu of flowers, memorial contributions may be made to the Virginia Baptist Homes Foundation, 3961 Stillman Parkway, Glen Allen, VA 23060.

The family will celebrate the lives of Earl and Jane, who passed away on May 27,

2020, at a private service, and they will be buried in the Virginia Veterans Cemetery at Amelia

Dora Marie “Weewee” Harris departed this life on Jan. 29 at Lynchburg General Hospital. She is survived by her daughter,... read more