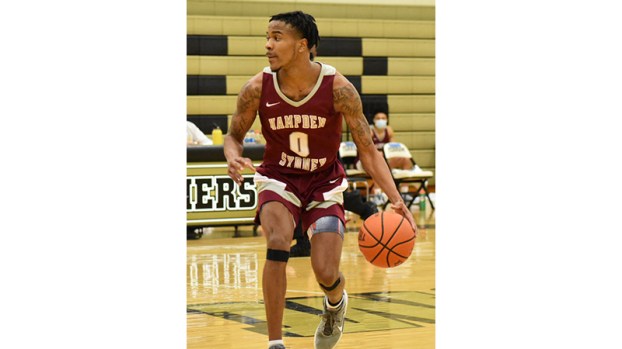 Hampden-Sydney College sophomore guard Ryan Clements hit a last-second 3-pointer Tuesday, Feb. 16, to give the Tigers a 71-70 win on the road against the University of Lynchburg. (Photo by Jenna Janicki)

Tigers sophomore Ryan Clements made a game-winning 3-point field goal with less than a second remaining to lead Hampden-Sydney College (H-SC) to a dramatic 71-70 non-conference basketball road win at the University of Lynchburg on Tuesday, Feb. 16.

Clements’ shot off the glass from left of the circle beat the final buzzer after the Hornets had made 1-of-2 free throws with 17.5 seconds on the clock to lead 70-68.

Tigers freshman Davidson Hubbard led the visiting Tigers (2-4) with a career-high 19 points off the bench, while senior captain Jake Hahn added 17 points and Clements finished with 14 points — none bigger than the final three.

“Wow, what a finish tonight,” second-year Tigers Head Coach Caleb Kimbrough said, whose team won its second straight game. “The guys have been adjusting and finding ways to get better all year through a lot of adversity. So proud of our effort and composure tonight. Great win.”

Lynchburg took an early 6-4 advantage at the 17:13 mark of the first half before H-SC used a 12-3 run to take its largest lead of the opening half at 16-9 with 11:21 on the clock. Hahn sparked the quick outburst with eight points, including a conventional 3-point play inside and a 3-pointer.

The Hornets closed to within 16-14 at 9:08, but the Tigers outscored their hosts 9-5 to lead 25-19 at 6:19, getting four quick points from Hubbard. Lynchburg answered back with nine straight points to go ahead 28-25 at 4:21, but the visitors responded well, outscoring the Hornets 7-3 to the first-half horn to lead 32-31 at the intermission. Hubbard had 10 points at the break.

H-SC got a 3-pointer from freshman Adam Brazil to open the second half and led 47-41 at 13:07 after consecutive baskets inside from Hubbard and Hahn. The Tigers matched their largest lead at 53-46 with 10:30 remaining after a steal and high-flying slam dunk by Clements.

Lynchburg answered with seven straight points to tie it at 53-53 with 6:13 on the clock, but Tigers freshman Alex Elliott responded with a big 3-pointer off the bench for the visitors at 5:57.

The game was tied four more times down the stretch, including at 66 with 1:17 left after another huge 3-pointer from Elliott. An old-fashioned three-point play by Suggs had the hosts ahead 69-66 with 59.6 seconds left, but Tigers freshman Josiah Hardy made two free throws with 42.2 seconds remaining to make it 69-68. Suggs made 1-of-2 free throws at 17.5 seconds for the 70-68 advantage. Clements then provided the heroics, launching his game-winning 3-pointer off the glass from left of the circle just ahead of the final buzzer at the 0.4-second mark.

In addition to Hubbard’s career-high and team-high 19 points, he added a career-high seven rebounds — four on the offensive end. Hahn finished with 17 points and seven rebounds for the Tigers, while Clements had 14 points, including the game-winner, along with a career-high and game-high seven steals. Hardy contributed eight points, three assists and two blocks, Elliott had a career-high eight points, including two 3-pointers. Brazil added five points. H-SC shot 44% (27-of-61) from the field, including 31% (5-of-16) on 3-pointers, and 60% (12-of-20) at the free-throw line.

It was the Tigers’ first win against Lynchburg since Jan. 21, 2015 — a 63-61 road win in Lynchburg — as the Hornets had won nine straight games against H-SC, which was playing its first game since Feb. 5.

H-SC is set to visit Virginia Wesleyan University on Thursday, Feb. 25, at 7 p.m.

Due to concerns surrounding the COVID-19 pandemic, the schedule remains subject to change.

A group of Buckingham County High School (BCHS) student-athletes let it be known Wednesday, Feb. 10, that they would like... read more