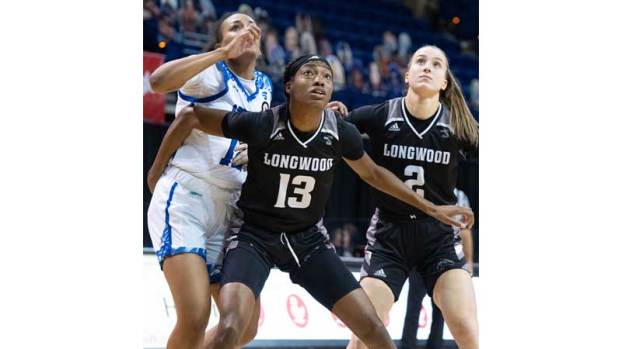 Longwood University junior forward Akila Smith, No. 13, blocks out in a game earlier this season. She recorded four blocks Saturday, needing only one to break the program’s all-time blocks record.

Smith entered the game in need of just one block to break the record and recorded four for good measure, including three in a row in a span of five seconds in the third quarter. However, the 5-foot-11-inch forward fouled out with 6:33 to play and Longwood trailing 52-49. Presbyterian took advantage of her absence with a game-ending 25-7 run.

“I think when you look at the final score, you have to know how we played in the fourth quarter,” Longwood Head Coach Rebecca Tillett said. “They made quite a run in the fourth, and we are fighters. We are never going to say, ‘They made a run, let’s see how it goes.’ We are going to fight back. To fight back, you have to be aggressive and take some risks, but they did a good job on the free-throw line down the stretch to extend the lead and made some good plays.”

Smith finished with 16 points for the Lancers, while sophomore guard Kyla McMakin scored 14 and redshirt freshman guard Adriana Shipp finished with 10. However, shooting woes doomed the Lancers down the stretch, as Longwood shot 2-of-25 from 3-point range and missed its final 10 in the fourth quarter. The Lancers also turned the ball over an uncharacteristic 20 times on Saturday night, as they rank best in the Big South with just 14.4 turnovers per game.

“They were all in the passing lanes forcing turnovers,” Tillett said. “We don’t turn the ball over like that, so I thought they did a great job.”

Prior to the big fourth quarter by the Blue Hose in which they outscored Longwood 30-10, the first three quarters were tightly contested, featuring seven lead changes and four ties. Trailing by just one to start the fourth quarter, the Lancers regained the lead early in the final frame as senior point guard Tra’Dayja Smith’s layup put Longwood ahead 48-47 with 9:40 remaining.

However, Presbyterian’s Georgia Stockton hit a pivotal three to regain the lead for the Blue Hose, 52-49, before Carter drew Akila Smith’s fifth foul with 6:33 to play, sparking the game-clinching run by Presbyterian. The Blue Hose (8-8, 7-7 Big South), who rank third in the Big South in free-throw percentage (.713), drained 19-of-20 attempts in the final 10 minutes, powering them to their seventh conference victory of the season.

“I think this was the first time that fatigue was a factor for us, and we certainly missed Brooke (Anya) today, so I think we need some depth and a little less fatigue.”

In a league-wide adjustment to this weekend’s women’s basketball schedule, Longwood (9-8, 8-4 Big South) will now travel to Gardner-Webb University this Friday and Saturday, Feb. 5-6, in Boiling Springs, North Carolina, instead of participating in its originally planned road series at Hampton University (4-8, 4-6 Big South) on those same dates.

The originally scheduled Hampton series has been postponed and will be rescheduled for a later date.

These changes came as part of a league-wide schedule adjustment by the Big South Conference to accommodate COVID-19 measures undertaken by other members of the conference.

Kyla McMakin is the on-court leader of a major turnaround in the Longwood University women’s basketball program that has unfurled... read more