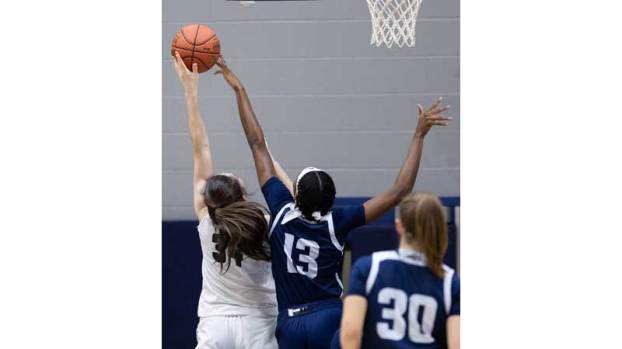 January has been a big month for the Longwood University women’s basketball team. Saturday night, Jan. 16, against Winthrop University, Kyla McMakin made sure the New Year’s party kept going.

Extending a month-long celebration that has seen Longwood win six of seven games, appear on ESPN SportsCenter’s Top 10 Plays twice and ascend to second place in the Big South Conference standings, McMakin poured in 20-plus points for the second straight night to lead the red-hot Lancers to a second consecutive win over Winthrop, 80-73, in Willett Hall.

The win extended a January surge for the Lancers, who have emerged as one of the Big South’s hottest teams since the turn of the calendar. Winners of six of their past seven — with their lone defeat during that stretch a 55-54 road loss at reigning Big South champion Campbell University — Longwood’s rapid ascent through the Big South standings has them now trailing only first-place High Point University (9-1) for the league’s top spot.

Saturday’s win over Winthrop (2-9, 1-7 Big South) was another showcase for the high-powered offense that has powered the Lancers throughout their third season under Head Coach Rebecca Tillett. The Lancers topped 80 points for the fifth time this season behind an up-tempo attack that scored 20 points off turnovers and assisted on 16 of its 27 made field goals.

“I thought our offense looked good today,” Tillett said. “The last two days we have really gotten out in transition, which was a point of emphasis for us. We have a lot of women who can knock down open shots and have put in the work for that, and that starts on the defensive end. The more stops we get, the more transition opportunities that we can get.”

After scoring 20 in Friday night’s series-opening 73-68 win against Winthrop, McMakin once again spearheaded another big night from the Big South’s top-scoring team in Saturday’s rematch. The sophomore guard finished a perfect 11-of-11 from the free throw line and added two assists and two steals en route to her conference-leading sixth 20-point game of the season.

“I think a big takeaway is how our seniors played off the bench,” Tillett, whose bench scored 21 points in the game, said. “Mallory (Odell) and Cookie (Boothe) both brought instant energy. I thought Milou (Vennema) had some really good minutes for us defensively. In these back-to-backs you’re challenged with fatigue, and if you play a really tough game the night before, you need everybody ready game two to produce, and I thought those three had a big impact on the game.”

The Lancers were equally dangerous inside and out, scoring 28 points in the paint, hitting 18- of-19 free throws and knocking down 8-of-20 three-point attempts. McMakin was one of four double-figure scorers, joining Akila Smith (13 points), Mallory Odell (12) and Adriana Shipp (10).

Smith was also outstanding in Friday’s win, logging the second triple-double of the program’s Division I era with 14 points, 13 rebounds and a school and conference record 11 blocks. She also had four steals and two assists.

On Saturday, Odell was a force in the paint, pulling down seven rebounds, including five on the offensive glass, and adding two blocks and a steal across a season-high 23 minutes off the bench, while Allysah “Cookie” Boothe added six points in relief.

“Coach Tillett and (Assistant) Coach (Jessica) Olms(tead) really stress the offensive glass, so that’s just part of my game I know I can emphasize,” Odell said. “It’s fun to fly in there — a lot of teams foul on the putback opportunities, so it was really fun that I was able to help us in that area.”

The win also keeps the Lancers’ unbeaten at home against Big South foes, improving to 6-0 in those games and 7-2 in Willett Hall overall.

“We are working on our defense, but we found a way to make our offense work and just kind of grind it out,” Odell added. “It’s not always pretty, but we got the sweep and the win we have been looking for.”

The Lancers (8-7, 7-3 Big South) are now on a lengthy break before their action, which will bring them back to Willett Hall for a two-game series against Presbyterian College on Friday and Saturday, Jan. 29-30.

The landscape of area high school sports, which has been in a constant state of flux since the beginning of... read more