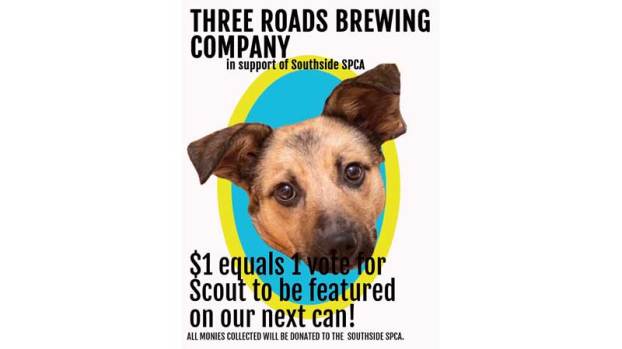 Scout the dog is just one of the three furry friends in the running to have their face on the next batch of beer canned by Three Roads Brewing in Farmville. All proceeds to the competition go toward Southside SPCA. (Graphic courtesy of Three Roads Brewing)

Raising a glass to pet adoption

Cracking open a cold one is about to get a lot cuter.

Three Roads Brewing Company in Farmville, in partnership with the Southside Society for the Prevention of Cruelty to Animals (SPCA), is currently holding a fundraiser to place the face of one lucky adoptable cat or dog on the label of its next batch of canned beers.

The fundraiser was brainstormed into existence by Southside SPCA volunteers and brewery workers as a fun way to raise money for the SPCA while promoting Three Roads beer and, potentially, finding a new home for some loveable Southside area pets.

According to Katyana Bender, front of house manager at the Farmville Three Roads location, the fundraiser has been going on since November and will conclude in mid-February.

In order to participate, patrons at the brewery can place a monetary donation into a set of beer glasses displayed at the bar inside of the Three Roads location on West Third Street. Customers can place money inside the glass displaying a photo of which animal they’d like to see appear on the latest batch of canned beers. The four pets donors can choose from include two dogs, Ruby and Scout, and cats Annie and Tiara.

Whichever pet has received the most votes in the form of monetary donations will have their face added to the label of the Top Down Lemongrass Blonde beer Three Roads will be canning in March. Additionally, all proceeds from the project will go to the Southside SPCA.

The special cans, she added, will be available where canned Three Roads beers are sold, including in both the Farmville and Lynchburg taprooms and several Farmville area convenience stores such as JW’s Express, Main Street Quick Stop, Tigers Corner, Whorsham’s Grocery and Rick’s Mini Mart in Meherrin.

Bender, who is a Southside SPCA volunteer, said Three Roads often holds fundraisers with the SPCA. The business is extremely pet-friendly, and it’s common to find a variety of furry friends at the brewery’s beer garden.

She added the community response to the fundraiser has been great.

Southside SPCA representative Steve Smelcer said Tuesday, Dec. 5, Ruby the dog is the only animal from the fundraiser to be adopted since the project began. The rest of the animals are still in search of their forever homes.

Smelcer emphasized Tuesday his excitement about the project.

“We just think it’s great,” he said. “We love Three Roads Brewing. It’s a great place for the community to come together. We’re big supporters of theirs, they’re big supporters for us. It makes for a really nice partnership.”

Several doctors, nurses and other health care workers from the surrounding area made their way to the Prince Edward County... read more