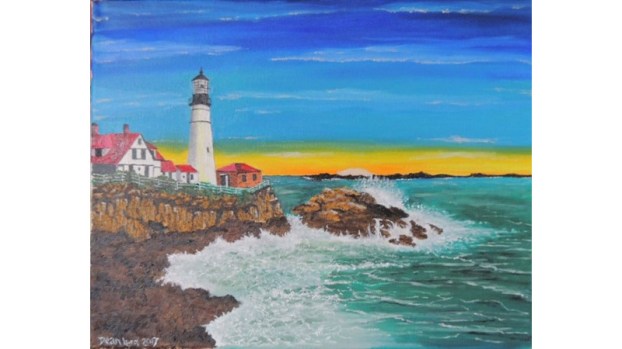 Central Virginia Arts continues to exhibit art at the Riverside Café in Farmville.

The current exhibition opening is a show by two members—Dean Lord and Anthony Hurt—whose art will be displayed during February and March.

“Lighthouse” by Dean Lord is one of the paintings featured. As a young child, Dean Lord was interested in art. He spent many afternoons on a loading dock drawing the lumber yard and railroad freight cars when visiting his grandmother.

At around the age of 6 or 7, he produced his first oil color painting, and he still has that painting. When he entered high school he enrolled in art classes. There he painted his second, larger oil painting, which he also still has.

After serving in the U.S. Navy and pursuing another career, Dean had the opportunity to attend college where he majored in art and graduated with a degree in fine arts.

“Italy” by Anthony Hurt is the second painting featured.

Anthony is a 1976 graduate of Prince Edward County High School. He went on to attend Howard University and graduated from Chowan University.

Anthony vowed to never work a 40-hour-a-week job which allowed him to pursue his love for art.

He was fortunate enough to always work a part-time job, which afforded him the opportunity and time to build his art career.

Anthony retired after 30 years in the U.S. Air Force Reserve. He has finished his second degree from Thomas Nelson Community College in Hampton while still leaving time to pursue his dream. Anthony worked in oils, acrylics and graphite pencils. His works depicts a wide range of colors and diversity in the use of shape and form. Being open to different art forms and challenging life experiences has given him a broad perspective of all types of art styles.

Anthony has exhibits in the Hampton Roads and Washington, D.C. metropolitan area.

After looking at how Virginia Food Works operates last month, I’d like to highlight one of our wonderful clients, Rupen’s.... read more