Centra Health officials are encouraged by a recent reduction in COVID-19 patients at Lynchburg General, although Centra Southside Community Hospital in Farmville is not experiencing the same level of relief.

As of Wednesday morning, Lynchburg had a total of 70 coronavirus patients, including 19 in the ICU, 15 of which were actively being ventilated.

The number is a significant drop from the 133 patients the hospital was caring for just two weeks ago.

Lewis said while those 70 patients are still a large strain on the hospital, it does take some pressure off of the health care provider. In fact, Lynchburg General has been able to reclaim its pediatric unit and half of the surgical floor which were both temporarily being used to treat an influx of COVID patients.

According to Lewis, Centra Southside Community Hospital in Farmville has not witnessed as much of a downtrend in patients.

Although Southside’s COVID census was at 10 patients as of Wednesday morning, the hospital recently had to push the capacity of its COVID-19 unit up to a high of 16.

Lewis reiterated in the past Southside was able to take on an overflow of patients from Lynchburg General when the hospital was at its worst, adding that Lynchburg has recently been able to do the same and offload some pressure from Southside.

Centra hospitals, according to Lewis, have still seen large numbers of deaths due to COVID during the last two weeks, although the rate of deaths does appear to be declining.

As of Wednesday, Centra Health had witnessed a total of 242 COVID-related deaths on its Lynchburg campus, up 17 since last week. Southside, Lewis added, has had a total of 16 deaths on-site.

“We’re hoping that death count will decelerate further,” he said.

As of Wednesday, Centra has delivered and administered more than 12,000 doses of vaccine.

Mueller acknowledged frustrations seen around the state regarding the speed of vaccine distribution, adding the situation was challenging.

“No matter what we want in the moment, there’s simply going to be far greater demand for vaccines than we have vaccines available,” he said.

Mueller said he does not believe the state will be in a situation of vaccine shortage forever, adding that vaccine access will likely increase in the near future to help pick up the pace.

Officials also responded to questions regarding extremely high call volume to Centra locations throughout the area, including comments that some Virginians call to arrange for vaccination only for that call to go unanswered.

Elliot highlighted that the large influx of phone calls began once the state opened up Phase 1b for vaccination eligibility, essentially making the vaccine accessible to roughly 70% of the population.

“When you start thinking about that, there is no phone bank or phone system set up to handle that type of volume,” he stated.

According to Elliot, Centra is currently in the process of adding resources and upgrading its phone bank system to ensure callers can contact a real person. 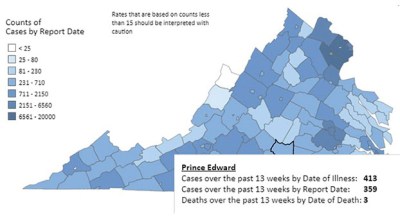 COVID-19 cases spike in Prince Edward County and across region