Electric cars have new town to charge in 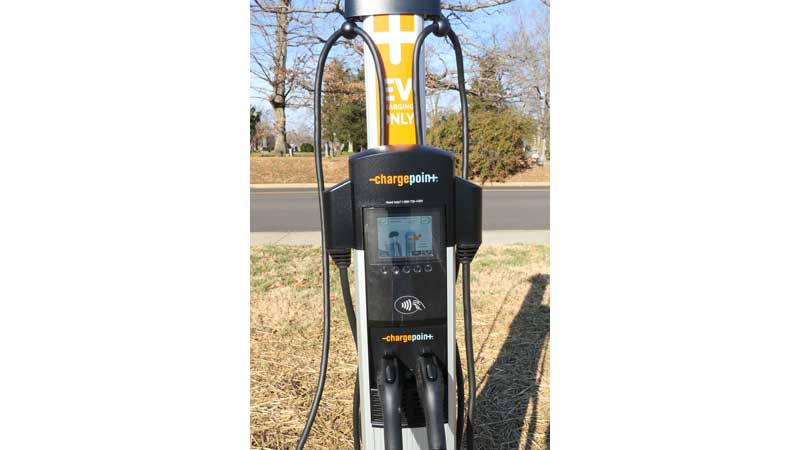 The Shoppes at College Park parking lot area fronting Gilliam Drive is the latest location in Farmville to have had electric vehicle charging stations installed. One of the three stations at that location is pictured here. Stations can also be found at Sheetz on South Main Street. (Photo by Titus Mohler)

Farmville has become an important spot on the map in Virginia for a brand new reason. The town has seen the installation of electric vehicle (EV) chargers in at least two locations in 2020, affording EV-using visitors a key rest spot and EV-using residents a more convenient place to live.

Chuck Kanovsky, authorized representative for the Shoppes at College Park LLC, explained the company’s thinking behind having the chargers installed.

“We’re a small, family owned business, and we live out in Maryland, and we happen to own an electric car,” he said. “So as we were going back and forth, one of the things we noticed was that there were really no EV charging stations south of the Richmond/Midlothian area and within a 50-mile radius of Farmville.”

He said company leaders thought the charging stations would provide a nice service to the area and would help attract people to the shopping center, since the company is, naturally, focused on its tenants and raising the profile of the center.

He said target users for the chargers include visitors to the area, like tourists or parents of students, part-time residents, like students themselves, and full-time residents.

But Kanovsky noted the decision to install the stations was more about being forward-looking than anything else. He said company leaders were watching the EV markets and observing that these charging stations are going up across the country.

“We wanted to have that opportunity to put (them) out in our center,” he said.

He expects their use to pick up in the next one to three years as people start buying more electric vehicles.

“We also advertise the charging stations on ChargePoint and on other EV charging maps that you can find online, so people who own electric vehicles can find them, and they’ll bring them into Farmville,” he said. “If you go on one of those maps and look for charging stations, you’ll see there’s none for a pretty huge radius. So this will bring them right into the heart of the Town of Farmville, and it’s very exciting to us.”

Those driving through the Shoppes at College Park parking area fronting Gilliam Drive will find three stations, each positioned between two parking spaces. Each station can service two EVs at once.

Kanovsky said the company is going to stencil the spaces so that people with EV cars will have priority for parking there and using the chargers. Bumpers will also be installed to protect the stations from being struck by vehicles.

The chargers there are level two chargers, Kanovsky said, before describing their capabilities.

“If you wanted to charge your car from empty to full and a car has 180 miles of range on it, it would take six to eight hours to charge it all the way up,” he said. “But a lot of people are traveling through, and they’re looking to get a 40-, 60-mile boost on their charging, so for them, (in) a couple hours they’d get a nice boost, and they’d be able to go on to the next location, which may be Midlothian or Richmond or somewhere else. They don’t drive it down to zero.”

He said that from what he understands, all the electric cars on the market — GM, Nissan, Hyundai and whoever else is making them — will work with these chargers. He indicated Tesla cars may require an adapter.

Kanovsky affirmed that the stations are well-positioned for allowing drivers easy access to activities for one to two hours while their cars charge.

“As somebody who drives an electric car, you want to park at a place where there are stores where you can go in and there are restaurants where you can eat and there are things that you could do,” he said. “So shopping centers and electric charging stations are a nice partnership because it allows you to do things while your car is charging.”