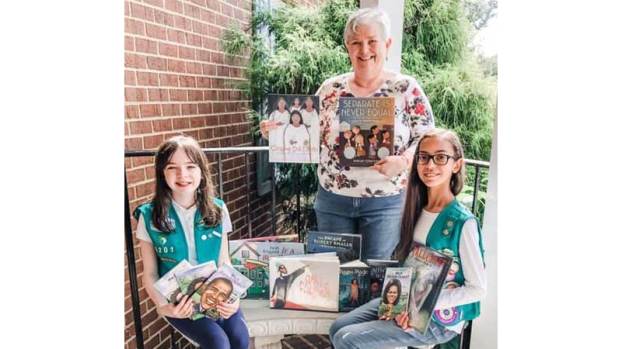 In September, local scouts Peyton Turner and Claire Tucker were awarded the highest award a Girl Scout Junior can receive, the Girl Scout Bronze Award, by the Girl Scouts of the Commonwealth of Virginia (GSCV).

GSCV awarded the honor to the two girls for their Diversity in Children’s Literature Partnership, a project the girls came up with in response to the social unrest following the killing of George Floyd in May 2020.

Witnessing the division and discourse seen around the country during such a polarizing year, the two scouts developed an idea for a project to give children access to a list of books featuring authors and characters from minority groups, giving local kids exposure to religions and cultures they may not often encounter in rural Virginia.

After completing a community-wide survey, Peyton and Claire put together an Amazon wish list of books to include in the project, working with Davis to assemble a collection of diverse literature.

According to Davis the library already had 23 of the approximately 100 books the girls researched and selected. Fifteen more books were purchased for the library.

But neither Davis, nor the scouts realized in early fall just what a big difference the project would make.

Right around the time the girls approached Davis about working together on the project, the library director was working to implement Beanstack, an app which allows readers to log the books they read and the amount of time spent reading.

The app also allows the library to create contests and challenges where kids can win prizes for the amount of books they read. Cumberland’s summer reading will also be implemented through Beanstack.

Davis knew the grant opportunity fit perfectly with the scouts’ project and wasted no time.

“I found out about it, and I applied on the spot,” she recalled.

It was meant to be. In December, Davis learned the Cumberland library had been awarded the $1,000 grant, allowing her to purchase 56 additional books on Peyton and Claire’s list.

Wednesday, Dec. 30, Davis said while she is still looking for a few extra books to add to the collection, most of the novels have arrived and are in the process of being cataloged. The books are expected to all be accessible by the middle of January, and Davis said she will have a printable list of the books available and a display put up in the children’s section.

Peyton, age 11, is currently a sixth grader at Cumberland County Middle School. Claire, also 11 and in the sixth grade, is homeschooled. The two ironically met at the Cumberland library when they were just toddlers, and they’ve been best friends and avid readers ever since.

For the two BFFs, the project is a sustainable way to give kids of all ages access to diverse literature.

In Davis’ mind, the books offer a chance for children to read about kids that look just like them. She said for other kids, the writing offers a chance to learn about other cultures and religions they’ve not had much exposure to.

Electric cars have new town to charge in

Farmville has become an important spot on the map in Virginia for a brand new reason. The town has seen... read more