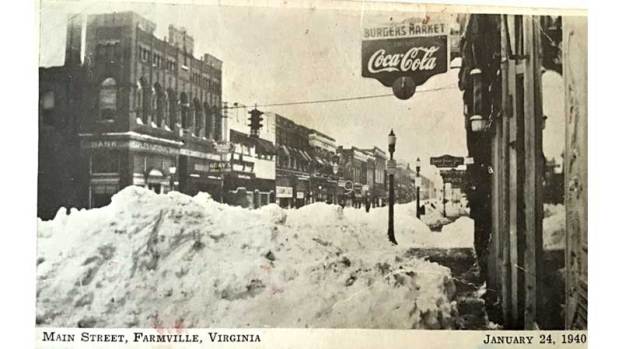 Five-foot snowdrifts and subzero temperatures made roads impassible during the blizzard of 1940. 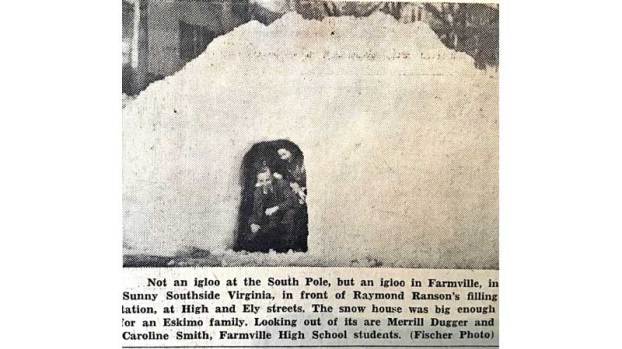 Waist-deep snow greeted residents of Farmville during the historic blizzard of 1940. Cadets from the Civilian Conservation Corps were enlisted to help dig out the town.

Farmville had a dark and stormy night like no other January 23, 1940.

The next morning, Farmville residents made a startling discovery. They couldn’t open their front doors — the snow outside had drifted to a height of four feet.

No one bought a newspaper that day, although a copy of The Farmville Herald cost only 3 cents. There was no way to get to town to buy one.

Farmville folks had watched the snow pile up for the last three days.

On that 1940 morning in Farmville, traffic officer J.W. Harper received a telegram from the state highway department in Richmond that reported weather bulletins from across the state. Farmville had received 24 inches of snow, the highest on official record anywhere or anytime in the state.

That day’s issue of The Herald reported: “All traffic is stopped! Automobiles are buried in snow above their tops — only huge white mounds on streets and highways. Sidewalks, streets, fences — all are disappeared under the deep white covering. Schools are closed, and people who attempt to step from their porches find themselves in waist-deep snow.”

Farmville folks in those days were accustomed to daily home deliveries of milk, ice for the icebox, newspapers, mail, meat and other needs. For the next four days, none of the above would appear on their doorsteps and porches.

The people in town were obliged to do without, but there was more trouble in the air, specifically the temperature. According to the U.S. Weather Bureau, Farmville was the coldest place in the country that week with a reading of 16 degrees below zero on Jan. 26; minus 15 on Jan. 27; and minus 16 on Jan. 28.

One home delivery — an item few need in 2020 — was coal. Nearly every structure in Prince Edward County was heated with coal in 1940, but, of course, a coal wagon could not get through those 5-foot drifts.

Nevertheless, heroic efforts were made to return life to normal. The town’s one snowplow, a blade attached to the bumper of a pickup truck, labored mightily for 20 hours, but at 2 a.m. on Thursday morning, it broke an axle. Mules and horses were enlisted from nearby farms to pull the plow.

Carlton Wayne, a young man living in Pamplin at the time, recalled his experience with a snowplow a half century later.

“During the big snow I wanted to see my girl in Farmville. I got halfway there in my Model A Ford roadster and had to stop. Then I walked behind a snowplow. It was the only way. It was bad, but when you’re in love, you know, you’ll do anything.”

That was not the only travel disrupted by the storm, The Herald reported. “The snow stopped all bus service . . . the last bus to enter or leave Farmville was the one bound for Richmond that left here about 10 p.m. Tuesday — it is not known if the bus reached its destination.”

Due to the combination of 5-foot snow drifts and subzero temperatures, Farmville Mayor W.C. Fitzpatrick declared an “extremely dangerous situation.” With the town’s only fire truck and ambulance immobilized by deep snow, the mayor asked that 700 cadets from the Civilian Conservation Corps (CCC), camp building Twin Lakes and Holliday Lake state parks be transported to Farmville in U. S. Army vehicles. The CCC boys reached Farmville through various means. They arrived by truck, road grader, mule and horse to dig out Main Street, Third Street, the hospital, fire station, and Norfolk and Western Depot.

Later that day Farmville traffic officer J.W. Harper received another telegram from the Virginia Highway Department stating, “6,000 men and all available road-cleaning machinery are hard at work trying to open the highway from Richmond west to Farmville.”

In the meantime, Farmville youngsters were engaged in some business of their own, The Herald reported. Main Street was the scene of a great snowball battle on Friday morning. After a window was broken at the firehouse and a neon sign cracked on High Street, the police put a stop to the snowball fight. Later Charlie Zimmerman and his horse-drawn sleigh took couples for rides up and down Main Street.

From his bed at Southside Community Hospital, George Richardson, 84, apparently the only casualty of the storm, recalled a February 1899 snow of 16 inches.

The Herald reporter observed, “For many years Mr. Richardson had been the proprietor of Geo. Richardson & Co. Grocery Store at 235 North Main Street. While attempting to reach his store Saturday morning, he slipped in front of a car at the intersection of Third and Main and broke his ankle.”

Another blizzard experience involving a Hampden-Sydney student and reported on page one in The Herald was probably a source of embarrassment for that student later in life. The headline read, “Pajama-clad HSC boy in blizzard in car all night! Mule comes to the rescue.”

The Herald related the following: “To Joe Manson of Blackstone, Hampden-Sydney College boy, it seemed a good idea at the height of the howling blizzard while snow was falling thicker than snow ever fell here before, to drive to Farmville in pajamas, dressing gown and slippers to get something to eat. On the Back Hampden-Sydney Road his automobile stalled in a snowdrift, and here Joe spent the night in his car. At 9 a.m. the next morning, Capt. D.W. Paulette, mounted on a mule, rescued the boy who was quite cold but otherwise in good condition.”

Without a doubt the Great Blizzard of 1940 was a rough time, but Farmville got through it. Could it happen again?

With weather as changeable as it is today, anything is possible. So, the next time you see the snow starting to fall, it’s best to think twice before going out. Unless you have a friend with a mule, it might not be a good idea.