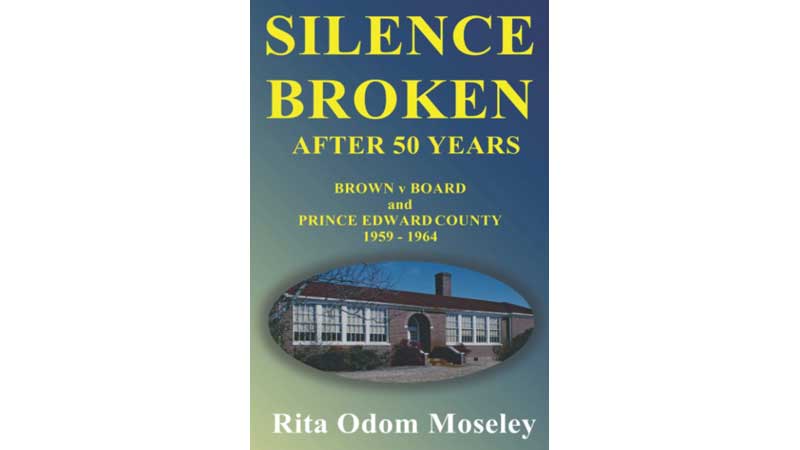 “Silence Broken After 50 Years: Brown v. Board and Prince Edward County 1959-1964” features around 170 interviews conducted by Rita Odom Moseley with residents directly affected by the Prince Edward school closings that happened in opposition to desegregation.

Author Rita Odom Moseley has released two new books in 2020 and is also highlighting a 2019 second edition of her first book titled “No School.”

Her real-life story and the experience of her schoolmates are the basis for her books, “Silence Broken After 50 Years: Brown v. Board and Prince Edward County 1959-1964,” “Lillie Mae Found Her School” and “No School: Second Edition.”

The work includes approximately 170 interviews of residents directly affected by the closing of Prince Edward County Public Schools, which occurred from 1959-64 in opposition to desegregation.

Those interviewed provided firsthand accounts of their experiences before, during and after the closing of the schools.

“It gave me the opportunity to see them and take their pictures for the book, but it also gave me a sense of how the school closing affected them and how each dealt with it differently,” Moseley said. “The closing of the schools was a tragedy, but each found, in their own way, how to become survivors.”

“Silence Broken” includes an index that lists the names of each individual interviewed.

“There are still emotions of hurt and anger, but there is also a tremendous amount of forgiveness,” Moseley said, referencing those who were interviewed. “Readers will learn that the school closing was devastating to many not having a school, but to some it was a blessing, because when forced to leave home, it provided them with opportunities in other places they would not have had here.”

Moseley herself was affected by the school closures, being separated from her family in order to attend school in Blacksburg and Christiansburg.

She explained what inspired her to write “Silence Broken.”

“I felt that nobody was talking about us, nobody knew about us, and if I mentioned anything about us to people that lived far away in maybe another state when I was working on a project with the school system, people didn’t believe that it happened,” she said. “So I figured if I put a lot of interviews of people telling (of) their lives, of what happened to them during that time, then it was something that nobody could say it was made up or it didn’t happen.”

The interviews conducted are with parents and their children directly affected by the school closings, as well as with community leaders from that time period.

Moseley said she conducted the interviews from 2008-18 and spoke to many people who had never given interviews before and some who would not have given an interview to anyone but her.

“Some people cried as they were telling their stories, men and women, now adults,” she said. “A couple people gave their interview, and then they pulled it out, and I understood. It was very emotional.”

“Like I said in the book, I felt that I was administering therapy to them as well as myself while I was interviewing them and didn’t even realize it until towards the end,” she said. “Nobody thought about bringing psychiatrists or anything in to us after schools were closed that long.

“That would have been able to help heal us. So I think that those interviews helped heal and gave, in some sense, a therapy to the ones that I interviewed.”

Cameron Patterson, executive director of the Moton Museum, said Moseley is one of the great storytellers of the Moton Story and local Prince Edward history.

“Not only has she shared her experience of being impacted by the school closings through her writing, but she has also helped many others in our community to share their story as well,” he said. “I’m excited for folks to have the opportunity to witness what Rita has been able to put together with her most recent book ‘Silence Broken.’ Rita also has fantastic stories to share for audiences of all ages.”

Moseley has had two other books published that are written for children.

“No School: Second Edition” builds on her first book, “No School,” which was published in 2017. “No School” follows a little girl who goes back in time and witnesses the school closures in Prince Edward.

Moseley alluded to what readers can expect from the second edition.

“The first story, it told about a young girl named Atir, which is my name backwards, travelling to space during the time when schools were closed,” she said. “And I didn’t actually want the book to be fiction. They put it in the fiction section because of that. So that’s why I did the second edition, because I wanted to take the idea of it being fiction out of it.”

She said the second edition has more advanced illustrations, created by high school students, and it also has questions and answers in the back of the book pertaining to the story.

“Lillie Mae Found Her School” is written for younger children, and it also deals with the history of Prince Edward County and the school closings.

This 8-by-10-inch historical rhyming book has full-page illustrations for children to color, as well as other fun activities for children at the end of the book, like word searches.

Moseley’s first book, “No School,” is also sold in the Moton Museum bookstore. To contact the museum, call (434) 315-8775 or visit motonmuseum.org.