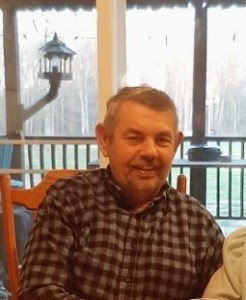 Monroe Miller, 68 of Farmville, passed away on Dec.22 at his home after a 2 year battle with brain cancer. He was born on Feb. 29, 1952, in Three Rivers, Michigan, to Crist and Iva (Hostetler) Miller. During his childhood, he also lived in Bowling Green, Missouri and Paoli, Indiana. When he was 15, he emigrated with his family to Paraguay, South America. On Oct. 21, 1975, he married Ruth Eichorn, also of Paraguay. They lived in Paraguay and raised their 6 children there until they moved to Farmville in 1999. Ruth passed away suddenly on Sept. 2, 2002. Monroe married Emma Gingerich of Plain City, Ohio, on Mar. 31, 2007, and gained another daughter. In Paraguay, Monroe was a pioneer and farmer, converting acres of forest and brush to tillable farmland and operating a small dairy. He continued his entrepreneurship after moving to the US, building sheds, gazebos and outdoor furniture with his sons. In 2007, Monroe started Pleasant Valley Meats with his son Jonathan, where he worked until he was no longer able. Monroe was a devoted follower of Christ and a member of the Oak Hill Mennonite Church. He loved people, and we will always remember his ready laugh and welcoming personality. Monroe had endless wealth of stories, and he loved to sit and drink tereré with friends and family. He is survived by his wife, Emma, 7 children: Joyce Burkholder (Tony) of Warsaw, Indiana; Mariano Miller of Pamplin; Nathaniel Miller (Amanda Barton) of Farmville; Merlin Miller (Marla Hershberger) of Farmville; Duane Miller (Dawn Landis) of Dillwyn; Jonathan Miller (fiancée Emily Troyer) of Farmville; and Andrea Gingerich of Apple Creek, Ohio; 12 grandchildren; 11 siblings: Mary (Enos) Glick of Kalona, Indiana; Lonnie Miller (Mary Troyer) of Crossville, Tennessee; Wilma Miller of Shipshewana, Indiana; Roman Miller (Ruth Wagler) of Hutchison, Kansas; Leona (Sam) Miller of Shipshewana, Indiana; Vera Miller of Centerville, Michigan; Clara (Elmer) Detweiler of Centerville, Michigan; Lila (Phillip) Eichorn of Colon, Michigan; Albert Miller (Anna Shetler) of Farmville; Emma Sue (Laban) Eichorn of Caguazu, Paraguay; and Eldon Miller of White Pigeon, Michigan. He was preceded in death by his wife, Ruth, his parents, and 2 siblings: Viola (Wilbur) Yoder formerly of Sturgis, Michigan and Ray Miller formerly of Centerville, Michigan. Visitation will be from 4 p.m. – 8 p.m. on Friday, Dec. 25, at Oak Hill Mennonite Church, Cumberland, VA. Funeral service will be at 10 a.m. on Saturday, Dec. 26, at Calvary Chapel, Farmville, VA, followed by burial at Farmville Christian Fellowship cemetery. Services will be conducted by Oak Hill Mennonite Church, led by John Eicher. The family kindly requests that anyone with flu-like symptoms not attend the services but would support the family by visiting them to express their condolences at a later day. Puckett Funeral Home is serving the family. www.puckettfh.com.